Nine Years After the Great Quake and Nuclear Disaster, the Pandemic Creates Some Familiar Scenes in Tsukuba 11 March, 2020 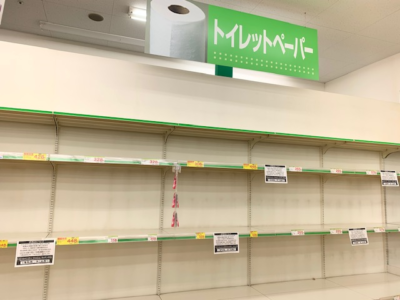 No toilet or tissue paper at a Tsukuba drugstore in March (2020), reminiscent of the days following the Great East Japan Earthquake (2011). Fortunately, my kids bottoms are still clean, but that’s only because of my instinct to FOLLOW THE CROWDS AND GO WITH THE FLOW!. On the day that the run on toilet paper first started, before I had heard any talk of a possible shortage, I happened to pass a drugstore just before opening time with a large crowd waiting outside. A sign outside read: REOPENING SALE, and I said to myself “what the heck, it gonna open soon…” and waited the 3 more minutes for the doors to open. When they did, everyone rushed inside and grabbed large packets of toilet paper ( another sign told us we were limited to two packs). Like a wild beast following the herd, I snatched up two for myself, before doing a little more improvised shopping for other things. It was only later I heard that people were out, so it was a miracle really – with all the toilet paper my three boys (and wife) use.

It was exactly nine years ago today that eastern Japan was rocked by a strong earthquake that led to a devastating tsunami and a nuclear accident. Because of the measures being taken to prevent the spread of the coronavirus, all major memorial services to mark the anniversary have been cancelled (along with so many other events). Our lives have been so shaken up by the epidemic (cancelled school, work, meetings etc.) that there has been no time to actually prepare ourselves emotionally for remembering that fateful day (March 11, 2011). It seems like it just suddenly jumped up on us. So what I did today, with all my work appointments having been cancelled, was try to retrace the steps I took after this area was brutally shaken at just before 3 PM. ( If you are interested, I documented what went on here at the time at this very website).

Unfortunately, my day long walk offered many visual and psychological reminders of the 2011 disaster`s aftermath. The first should be no news to anyone (you might have encountered the same scene this month in any country around the world – empty shelves in the stores. The other common feature is the preponderance of masks – back then to keep out dust and radiation – now to make other people feel comfortable ( you get a dose of the evil eye if you don`t wear one – and there have been incidents of shouting if maskless people cough or sneeze near others). 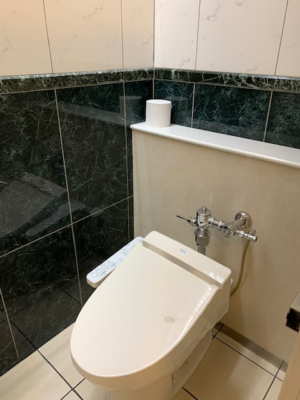 Only in Japan(??) Despite the lack of toilet paper on the store shelves, there are still extra rolls laying out in public toilet stalls at malls, stations, etc. and there are very few cases of theft (if I had none I would think about putting one of these in my backpack, wouldn`t you?

It is the dread of the unknown which most strongly links the two situations. Back then we were scrambling for information, geiger counters or perhaps a ticket out of the country. The coronavirus has us just as stressed out by the unknown and everything is compounded by the fact that our work and hobby schedules have been disrupted.

I am sure that everyone knows about Prime Minister Abe’s recommendation that all schools in Japan be closed. You probably do not know (if you don’t live in Tsukuba) that the schools here are open (with no classes) for those who wish to attend. School lunch is also being served.

The reason you haven’t heard about it (if, in fact, you haven’t ) is that our mayor, Tatsuo Igarashi quickly announced (against Abe’ recommendation) that he would make schools available. Though this was a bold move (by a young and ambitious politician) Abe does not like it  when people challenge him, and thus Igarashi’s decision about schools in Tsukuba has not been reported by the mass media. 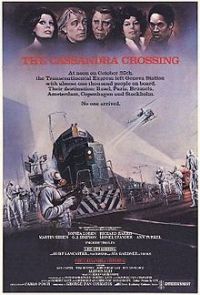 I’ve been spending a lot of time during my semi-confinement reading and watching movies (online for free). Of course I’ve enjoyed some of the great (and more difficult to watch) Japanese classics (I will provide some links bellow), but as a more mindless  way of passing the time, I watched a film I remembered having seen back in my childhood, a disaster/conspiracy thriller which I really enjoyed back in the day. All the men in anti-viral protective suits that keep cropping up on the  TV these days reminded me of it (It`s about a plague-exposed terrorist who gets on a train exposing all the passengers). It has a real big name cast – like all the major 1970s disaster movies – and its a treat to see the legendary acting teacher Lee Strasbourg in one of his few screen role (why he agreed to be in this hokum I cannot imagine!)

You can watch it here

Some more serious films you should watch if you are interested in Japanese cinema and culture:

Or how about Ingmar Bergman`s classic

A timely watch not only because it`s set in a Sweden being ravaged by the Black Death, but also because of the recent passing of it`s great leading man, Max von Sydow on March 8th of this year.