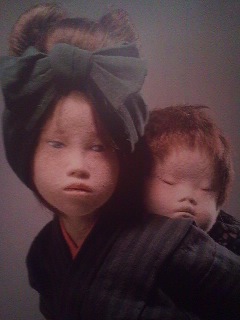 On the Way Home; a big-sister taking care of her younger sibling-   cloth sculpture  by ATAE YUKI

February is Doll Season in Japan. During the weeks leading up to the March 3rd Hina Matsuri Festival, traditional Hina Dolls seem to be on display just about everywhere- in hotel lobbies and at supermarkets, at doctor`s offices and community centers-  in fact, besides the real museums which are having the requisite Hina Doll exhibits at this time of year, there are  whole  commercial districts of certain old (and economically depressed) towns across Japan (including Makabe and Tsuchiura, near Tsukuba) which have been turned into veritable Hina Doll museums, as visitors can stroll from rustic shop to rustic shop, from open- house to open- house, viewing the family-heirloom doll-sets which have been put out on display for the occassion (as part of local revitalization projects).

And of course there are the Hina Dolls which can be seen if you are lucky enough to be invited into the home of a Japanese family that has them out…………..

But alas! By now you must have become so de-sensitized to their ubiquitous presence, that you probably shuddered when you saw in the heading to this post that I was promoting yet another late February doll exhibit. 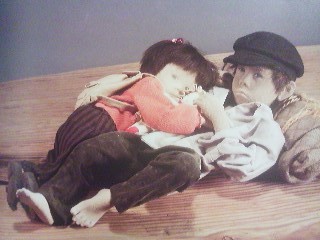 Homeless children in a burnt-out Tokyo right after the war

Do not be put off ! Though the Shimodate Museum of Art DOES have one of the standard  Hina Doll exhibits on its first floor- the dolls that they are showing UPSTAIRS are NOT HINA DOLLS – they  are something quite of a different sort:  the astounding works of ATAE YUKI * .

I say astounding because that is what the works of this 77 year old “Sculptor in Cloth” truly are- they can cause jaws to drop, tears to fall, and feet to stop in their tracks.

I have decided to go as far as to call him a genius- because of the way he bestows each individual figure he creates with a distinctive life of its own, with their expressions and poses always suggesting a deep psychology. The energy that he somehow animates these non-moving figures with, makes them seem truly alive ( though this can be creepy for some !) They are deeply beautiful as well. 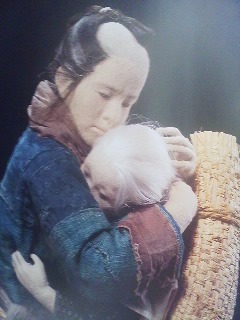 In Japan, there is rich, and very ancient history of creating three-dimensional representations of the human form. Each particular period of Japanese history can be characterized by its own iconic “doll” . The earliest of these are the anonymously made DOGU of the Jomon Period (12,000 BC-300 BC) and HANIWA clay figurines of the Kofun Period (3rd to 6th centuries), which were then followed by Buddhist sculpture, some of which are among the most sublime works in Japanese art- created by some of its greatest names.Then in the Edo Period (1600-1868) in addition to Buddhist sculture was the development popularityof elaborate Hina Dolls

ATAE YUKI carries the torch of this great tradition- and might be its greatest living practioner.

Like the best Japanese Buddhist sculpture (and my favorite of these are of wood) ATAE`s dolls are warmly textured- and  they are fascinating  from afar- and even more so up close- since the real wonder lies in the tiniest of details (see the old woman`s hands gripping her sons kimono in the photo above!). 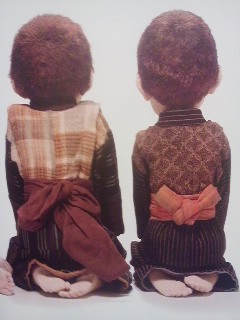 By Atae Yuki- all of ATAE`s works can stand on their own without the supports of wires, etc.

ATAE was born in 1937 in Kawasaki, Kanagawa Prefecture, to parents who had come to live near Tokyo from the remote Amami Islands (Kagoshima Prefecture,) where they had been born.

In childhood he was obssessed with drawing pictures and watching movies.  After having lived and grown up through all the hardships of wartime and post-war Japan, he started working for a mannequin-making  company.As a young man had wanted to be an artist, but could no other art-related work at which he could make a living- imagine what Japanese billboards and signs would be like if he had decided to become a sign-painter! It was making mannequins that led to his doll-making career.

He has been making human figures- out of various materials- ever since those mannequin days. The images impressed on his mind when he was a boy- whether from real life or the movies- emerge frequently in his work. 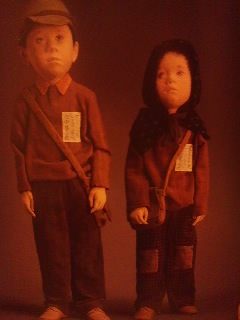 Boys watching out for B-29 bombers during the war

The Shimodate (pronounced- Shee moh DAH TEH) Museum of Art in Chikusei City (about an hour`s drive from Tsukuba) has arranged for this very special SEASON OF DOLLS event on the occassion of the tenth anniversary of its foundation (though the city will remain heavily in debt because of the museum`s construction- for generations to come!)

And while most HINA DOLLs in Japan will be put away immediately after the festival of March 3rd, the ATAE YUKI show will be on till the 9th.

There is one problem for me with the current exhibit- the lighting. While some of the pieces are lit in a way that brings out their best qualities, in others overlighting or poor light placement washes out what is beautiful or reveals gives us too close a look at the delicately featured faces. This reminds me of watching a traditional Noh play, with masks and costumes created for viewing under fire-light, drowned out under the mega-wattage of modern spotlights.

The museum is offering a pair tickets with which you can also get into the ITAYA HAZAN ( an important ceramic artist) Museum.

Shimodate (which can also be reached by using the rustic Joso Line, after changing trains at the TX Moriya Station) has a long history. It was first created by Fujiwara no Hidesato, who had come to this area from Kyoto to supress the Taira no Masakado Rebellion in the 10th century.

There are a few interesting temples and shrines in the area, and plenty of old houses and shops there now.

In summer I try to get to the exciting Gion Festival held in Shimodate at the end of each July- giant portable shrines are purified in a river after having been shaken about energetically through the town. 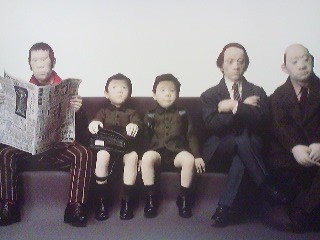 Riders on the train

The ATAE YUKI exhibition, however, probably will give you as great an incentive for getting to Shimodate as any you will ever get. 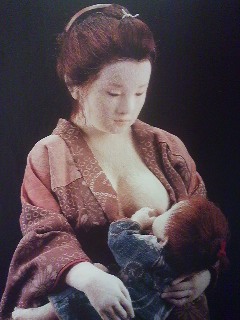 Breast-feeding- which for Atae (and many Japanese, represents the purest form of human contentment 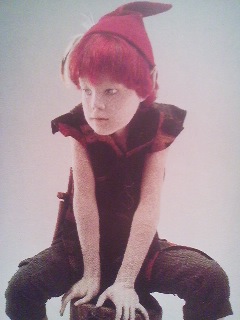 ATAE`s rendering of Peter Pan- much better than Disney`s- don`t you think?

Here is the Shimodate Museum of Art`s home-page (in Japanese):

And information about visitng Atae`s own museum located by Lake Kawaguchiko near Mt. Fuji: 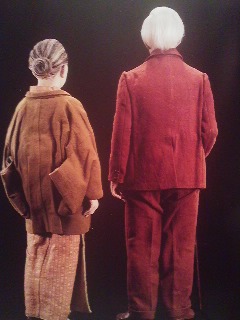 And if you like, you can have a free listen (and download) to a song that was written  by Tom Debor, Ascelin Gordon and myself, and recorded by Tsukuba based eclectic-world-funk band Xenophonia- It is called (appropriately): Shimodate

It features the crazed saxophone playing of Dr. Kawakami Ryutaro- well worth checking out!

* His family name is ATAE (与)- pronounced AH TAH EH, and his given name (勇輝) YOU KI. And yes, this is his real birth-name, though many Japanese mistakedly take it for an adopted “PEN-NAME since it means:   Bestow Shining Bravery!)