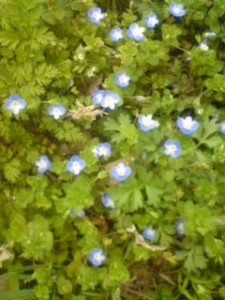 They bloom low to the ground and in abundance, forming a cobalt blue carpet of tiny flowers beside Japan`s rice and vegetable fields and in its wild open spaces. And though they have only been present in Japan since the late 19th century, many Japanese consider their blossoming a signal that spring has come. This is not only because they bloom before the cherry trees (sakura) but also because being so low down, and so cute and pretty, they make more of an impression on  small children than do Japan`s more revered spring blossoms which blossom high overhead. Thus, their appearance in March ( or like this year, even earlier) brings back a flood of childhood memories of spring to many people. 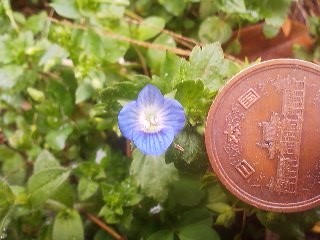 When I first pointed these flowers out to a Japanese neighbor of mine a few years ago, she told me that they were called O-inu no fuguri. At that time I could not undertand exactly what this name implied, but I could catch that the part that it was A DOG`S SOMETHING OR OTHER, but I had no idea what FUGURI meant. When I asked my neighbor to explain, she turned a bit red, and told me that she was two embarrassed to say!

My curiosity peaked, I went home and took out my dictionary. Fuguri meant… er… BALLS….. I mean testes or testicles! Later at the library I read that these flowers were given that name because a part of them supposedly resembled a dogs bullocks. Going back for another look at the flowers, I just couldnt see it. 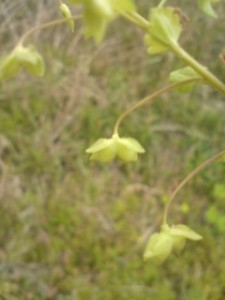 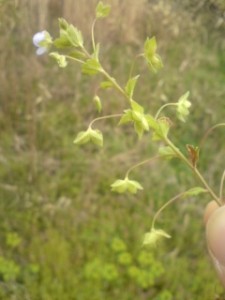 I got down to have a closer look. In fact, I got all the way down to the ground, laying on my side to examine the little flowers. There they were, under the flowers, two little fruits, which look like….. well…. er…. dog testicles.

Still I think it quite odd that these very cute flowers be so coarsely named.Especially in the polite world of Japanese botany and horticulture. Whoever it was who decided on it, sure had balls!

For more pics ( and much better ones than mine), go here:

And dont forget to look for them outside!