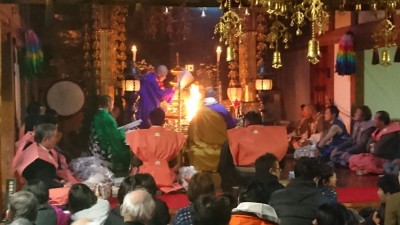 After a “wadaiko” drumming performance and chanting of sutras the priest got a sacred GOMA fire going. Another priest is braising amulets over the flames. A descendant of the Hindu Homa, Goma fires are a special feature of Shingon Esoteric Buddhism (the most common sect in Tsukuba`s old neighorhoods), introduced to Japan in the 9th century by the great Priest Kukai.

I had been told the event would begin at 7:30 pm, so I figured we should get there 10 or 15 minutes early. I had no idea how, though, of just how popular the Setsubun Festival held at the 13th century Anpukuji Temple was. I realized we should have arrived much earlier as soon as I saw the large parking we had been directed into ( by a uniformed man wielding a bright orange glow-in-the-dark baton, specially hired for the event) we almost completely full. 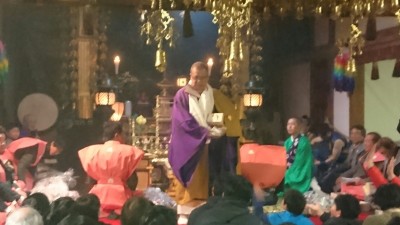 Tateno-san, the priest of the Anpukuji Temple greeting the large crowd that had come for Setsubun Eve and the Mame Maki bean-throwing ceremony

Luckily I had just visited the temple a few days earlier to take pictures (and speak have a very nice chat with the priest`s son) so I was able to navigate us through the frosty winter darkness to the temple`s main hall. The frenetic sound of Japanese drums was pouring out of it as we approached. Taking off our shoes and walking up the steps to the deck outside the entranceway, I peeked inside. There were two drummers, one dressed as a traditional drummer – and the other as a priest – wildly pounding away. As I had already suspected, the hall was already jam-packed with people sitting on the floor, some in polite seiza style (kneeling with legs folded under), but mostly cross-legged. The majority were senior-citizens, with some young families with kids – people whose ancestors have been come to this very same temple of Setsubun Eve for generations.

I tried to slide open the doors and slip inside – but it was to crowded to get in. Meanwhile, more people were arriving and joining me standing out on the deck and peering inside. 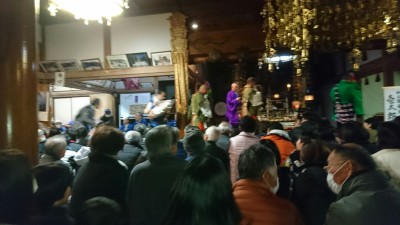 The “special guests” local dignitaries and a very low-ranking sumo wrester came in to the sound of blowing conches (HORAGAI).

The drumming came to an end with a bang – and a round of warm applause. Thankfully, the priest then called for the people already in the hall to move even closer together and make room for the late-arrivals. Most of us standing outside were then able to squeeze in.

I found myself sandwiched between two very old ladies and the sliding door entranceway.

I took in the room and the faces around me. Though the hall was definitely a recent reconstruction, I knew the temple had originally been founded back in the Kamakura Period. I guessed that just about everyone there came from a family that has lived in the area for generations. Imagined pictures of Setsubuns Past at Anpukuji floated before my mind`s eye. 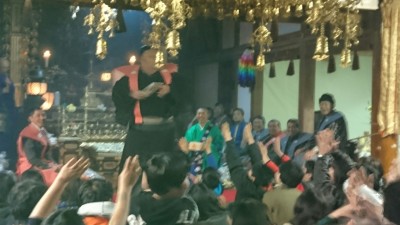 These visions were dispelled by a sudden blast – the sound of conch shells (horagai) being blown – to clear the area of evil forces. The blowers walked into the hall in a procession of priests local dignitaries and a motley sort of sumo wrestler!

The two dozen or so men walked up unto the main vestibule, where they sat down. Then the chanting began – the Hanyashingyo – in two versions: one in sing-song, and then in a monotone chant.

When that was done the head priest got a GOMA sacred fire going. As he did this he prayed for the safety, health and prosperity of the community. Another priest braised amulets in the fire (and by doing so activating their power). This went on for a while, maybe 20 minutes. But goma ceremonies have been carried out in Japan since the 9th century when Kukai introduced them to Japan.

When the fire finally went out, people started getting restless. What they had really come for was about to begin – the distribution of snacks and other other gifts in the MAME MAKI (bean-throwing) ceremony.

The throwing was done by the dignitaries, beginning with the head-priest. After a short greeting he tossed soy-beans toward the inner-sanctums of the main hall crying FUKU WA UCHI (Good fortune inside!) and then turned towards the main-entrance (where I was sitting) and tossed beans shouting ONI WA SOTO (I tried not to take it personally!).

After throwing the beans, he took three souvenir hand-towels (in plastic wrap) and tossed them to the crowds.

The rest of the dignitaries (including a local diet member) did the same. The awkward sumo wrestler provided some comic relief (especially when one of the other tossers through beans right into his unsuspecting face as  he yelled DEMON OUT! For a few seconds it looked as if the poor giant (who was visibly uncomfortable “on stage”) might burst out in tears.

When each of the VIPs had thrown his beans and towels, they all got up, took large backs of snacks and tossed them into the crowd (which I estimate to have consisted of more than 200 people).

I was amazed at how agile and sprite the frail little old ladies sitting next to me suddenly became. I had no chance coming up with any snacks as they scrambled and leapt to snatch up anything that came in our vicinity! Seeing me standing there empty-handed when it was all over they kindly offered me one of the packets they`d hoarded.

As I headed back towards the car through the darkness, I opened up my gifted snack – an UMAIBO – light, puffy and shaped like a sushi roll. I started munching as I walked…. mmmm….. I was hungry…. and eager to get back home to eat the EHO-MAKI that I had back home waiting for me!