Making Miso at Home- the Revival of a Once Ubiquitous Late Winter Rite 19 February, 2020 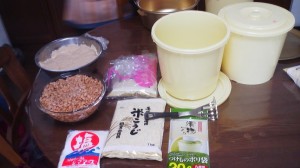 All you need to make MISO- soy beans, salt, KOJI ( fermenting agent), a bucket, plastic bags, a few pots and bowls, and a masher

Miso, a fermented bean-paste made by letting sit for a few months a mixture of boiled and mashed soy beans, a fermenting agent called KOJI, and plenty of salt, is an essential element of Japanese cuisine-  helping to give it its distinctive flavor. Being rich in vitamin B 12 and protein, particularly threonin and lysine ( important amino acids), it has also been very important for the Japanese nutritionally, especially before the Meiji Restoration of 1868, back in the days when for religious reasons meat was rarely eaten. And since as a fermented food it could be kept for months on end without spoiling (even before the advent of artificial refrigeration), this flavorful and healthy staple was truly indispensable to life in pre-industrial Japan.

Things have not changed much.

A great majority of Japanese still have miso in one form or another EVERY DAY- most commonly at breakfast-time as MISO SHIRU ( miso soup), in which the bean paste is blended into a soup stock. It is also used to make a wide variety of other dishes, sauces and dressings ( which I will mention later). Most simply (and my most favorite way), miso can be eaten plain, as a dip, for young ginger roots, cucumbers, strips of cabbage, or other vegetables . In fact, if you ask a Japanese friend or acquaintance spending some time abroad what they miss most about home, they most probably will answer- MISO SOUP!

Though brought over to Japan from either China or the Korean Peninsula at least as early as the late 7th century ( I will discuss miso`s interesting history in further detail below), the eating of miso was mostly limited to members of the Imperial Family, the aristocracy,  and the Buddhist priesthood. This was true  until the end of the Kamakura Period (1185-1333), when soy beans became more readilly available to the general populace. At some time during the Muromachi Period (1336-1573) miso soup was invented.

It was in the Edo Period (1600-1868), however, that MISO CULTURE really started to flourish, with the proliferation of various styles of miso ( many which are distinct even today to particular regions), the establishment of numerous distilleries and shops for its production and distribution( many of which have remained in business to this day), AND the invention of a whole new array of recipes which made use of the important paste. 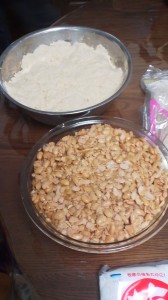 Despite all the miso factories and shops which arose at that time, it is safe to say that most people outside the big cities- and certainly nearly all the farmers ( who made up the bulk of the population) made their own miso at home. One proverb that I have seen can  probably be given as an explaination for this. It goes: MISO KAU IE NI KURA WA TATANU (味噌買う家に蔵立たぬ), which I translate as- Families that buy their miso build no storehouses! In other words, buying miso at stores was expensive and any family that wanted to save up should make their own.

But another reason probably lay in the fact that people thought their own miso was the most delicious- since each household`s  tasted different. Many were proud of their secret family recipes. This is evidenced in a Japanese expression still used today: TEMAE MISO (手前味噌)-which means to flatter oneself or toot ones own horn. From this expression it is clear that in past ages there were many housewives proud of the taste of their home-made miso. 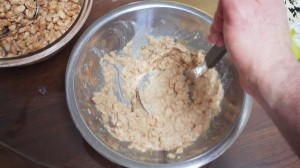 At some point, however, probably beginning about fifty years ago- in the 1960`s, store -bought miso became so cheap, available and tasty, that the custom of spending a winter`s day making it at home had practically died out.

So for many years after coming to Japan I had never really heard of anyone making miso at home. Until recently that is. Last year, and especially this year, when talking to people in February and March ( the traditional miso making season) I found that many had plans for miso making. Last year I was invited for the fun, but had to miss out because of my sudden hospitalization and subsequent surgery for gallstones. The disappointment of not being able to join my friends in carrying out the age old miso making procedure had lingered with me for nearly a year- until I got my second chance- and I have to tell you it was worth the wait.I dont know how my batch will come out ( since it wont be ready till October) but with all the mashing, mixing, throwing, and stomping that it involved ( along with the friendly banter which went on all the while)- it sure was fun. 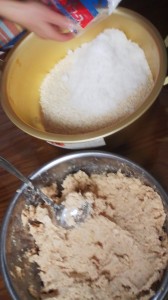 After the soy beans have been mashed- in another bowl, salt and KOJI ( fermenting agent made from rice) is blended 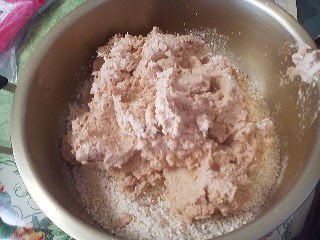 Let me tell you how we made our Kanto- style miso ( under the supervision of Junko Takasaki).

Since all of us have long been living in Tsukuba, which is on the Kanto Plain in Eastern Japan, we had naturally been set on making Kanto style miso, which is reddish-brown and salty, as oppossed to the sweet white miso, which is popular in the Kansai Region ( Western Japan), around Kyoto and Osaka, etc.( It is always funny for me to hear the complaints of Kansai men married to Kanto women ( or visa versa) who dont like the type of miso their wives serve!)

First, the ingredients ( for each batch), which were ordered from COOP , a food copoerative:

1 kilogram of dried soybeans ( ours were from Hokkaido) 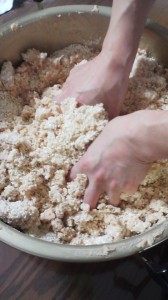 Blending the mushy mixture of mashed soy beans, salt, and KOJI by hand brings back brings out the child in you again

First the beans have to be rinsed ( a few times) and then soaked overnight ( or for several hours). Then they have to be boiled until soft. If you are using a usual pot, this will take at least 6 hours. If you use a pressure cooker, it takes about 20 minutes, if you then let the beans stew in their own heat for about 4 hours ( Junko-San did this part for me- Thanks Junko!). 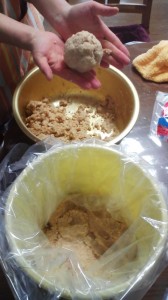 When the mixture is thoroughly blended it is removed by hand, and formed into balls- which are tossed into a bucket 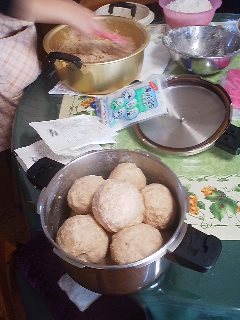 A bowlfull of miso balls

Then the fun begins!

Mash your beans until fully crushed. It is really surprising how differently each persons mashing technique creates completely different consistencies.

Combine the salt and koji and then blend into the mashed beans- use your hands for this ( so make sure your hands are very clean!). The gooey consistency will bring back memories of kindergarten ( well at least it did for me!). 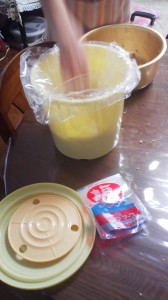 Balls of the mixture are tossed into a bucket lined with a plastic bag. This is done to get the air out

When the mixture is thoroughly and evenly blended transfer it all from the mixing bowl into a bucket lines with a plastic bag. This is done by scooping up handsfull and shaping what you have lifted up into large balls. These are then tossed down SPLAT into the bucket. This is done to facilitate the removal of excess air from the mixture. 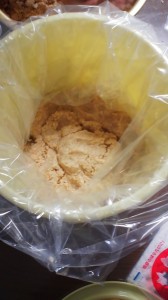 After the balls of mixture have been PLOPPED into the bucket

When the entire mixture has been tranferred, press down with your hand. Then to further attempt to get rid of all the air, the plastic bag will be folded closed over the top, and you put your bare ( preferably socked) foot into a separate plastic bag and then step down on the paste. 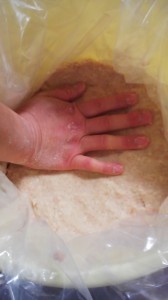 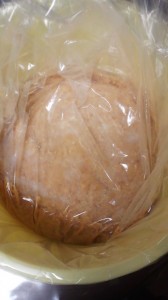 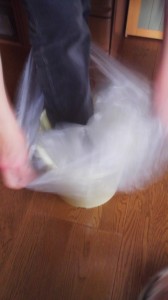 Your miso will be ready in October. Each persons batch should be different. I cant wait to compare. 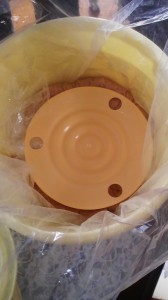 When you think enough air has been pressed out the plastic bags are twisted tight and this board is placed on top. A weight is then place on top of this to keep pressure on the miso

Why has there been a revival of the custom of making miso at home. Well, I have thought about it long and hard and have come up with several reasonable explanations.

First, there have been promotion campaigns- by the food cooperatives- which sell the ingredients, AND by the companies which sell the tuperware ( the buckets) which are used.

Interestingly, it seems that one of the reasons making it difficult in recent decades to make miso at home was the proliferation of heating in homes. Miso making, especially the initial period of fermantation requires cold. In the old days Japanese homes were not heated at all. In recent years, however, not only do nearly all homes have some sort of space heaters, but many homes are heated on a wider scale. Large apartment complexex also tend to be less cold. This makes for conditions which are not optimal for making miso.

The special tuperware now available make it possible ( and convenient). 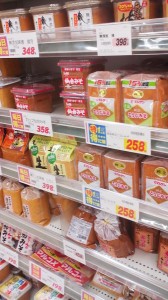 At any supermarket in Japan there is a large selection of MISO featuring a wide variety of taste, color and price

Thee is of course the desire by many to be aware of exactly what is included in what one eats and since it is possible ( or should I say, certain) that most commercially produced miso products contain all sorts of additives and chemicals- it is understandable why one would want to made it from scratch.

Interestingly, one reason for the popularity of miso in general ( not only the home-made kind) is that there have been reports by doctors that miso can help clear the body of radioactive material ( the same is said of bananas). It is reasonable that people eating more miso for this reason would want to make their own- and be the masters of all that goes into making it. 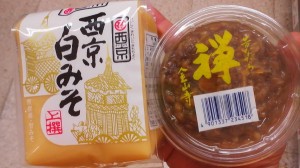 The lighter colored miso from Kyoto (on the left) and a type used just used a dip ( and not for cooking), on the right.

And last but not least there is the nostalgia making miso elicits- memories of ones mother or grandmother who had put so much love and affection into the effort. Well, my grandma never made any miso ( she had never even heard of it!), but still, joining my friends for a few hours of chatting and food-making did fill me with a special emotion- one of a bond with the history of our species. For it was probably the preparartion of food in groups and the communication which that involved- over thousands ( tens of thousands) which eventually led to our being what we are today……………….. human. 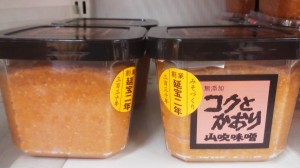 This miso must be of especially high quality and taste since it is double the price of most other brands available at this supermarket in Matsushiro, Tsukuba 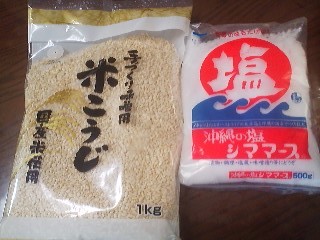 Salt and fermenting agent- besides the soy beans, the key ingredients of MISO