GASSUISEKI JINJA (月水石神社)- A Shrine with an Egg for Conceiving Children and Preventing Gynecological Ailments (has its festival on February 18th this year – 2018) 18 February, 2020 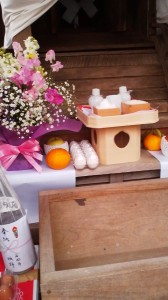 A packet of eggs among offerings left at the GASSUISEKI SHRINE (月水石神社).

In past ages, when it came to FERTILITY, REJUVINATION, REBIRTH or the coming of SPRING, most peoples of the world, no matter where they were living, adopted a symbol which they share in common to this day- the EGG. The image was obviously so powerful that even when smaller localized cultures or cults were absorbed into larger nations or world religions , the eggs came with them. What stands out most in my mind in this regard is the Easter Egg, an ancient fertility symbol used for spring rites, ceremonies and celebrations by the various pre-Christian European communities, which was able to make the cross over perfectly into the new role of representing the resurrection of Jesus. On the forested lower slopes of Mt Tsukuba, in the sleepy village of Usui in Tsukuba City, sits a small shrine which also makes use of the egg- not only as a symbol of the coming of spring, but also as an amulet for those who are hoping to conceive a child. 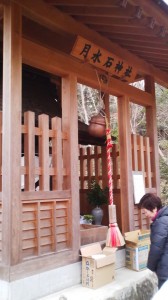 The shrine, called the Gassuiseki Jinja (月水石神社), has also long been a place to pray for the prevention of or relief from various gynecological ailments. Every year, on the 25th day of the first month of the LUNAR CALENDAR ( which falls on February 18th this year-2020), people ( mostly women) come from far and wide ( today I met someone who driven more than 90 minutes from Mito) to give thanks to the shrine for answered prayers with gifts of eggs! These egg-offerings brought by those who have become pregnant or achieved cures and then taken up by others who are still praying. 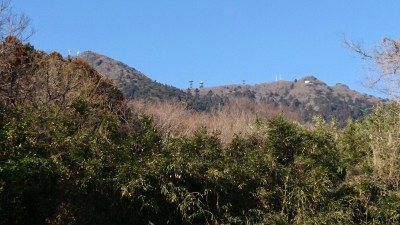 The view from the shrine. If you are wondering why there are so many shrines connected to pregnancy around Mt. Tsukuba – it`s because of these twin peaks, representing the male and the female: which when put together make…. 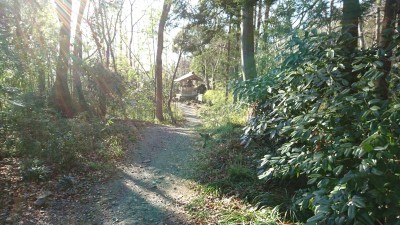 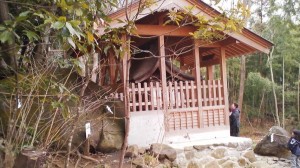 The large boulder behind the shrine is the object of worship. Reddish water is said to drip from it once a month- the name of this shrine actually means the Menstruating Rock Shrine

For me, even more interesting than this quaint custom is the name of the shrine itself. The characters used to write GASSUISEKI are MOON,WATER and ROCK. But since the moon is a symbol of the FEMALE in traditional Japanese culture ( while the sun represents the male) and local legend has it that the large cracked stone behind the shrine DRIPS REDDISH WATER once a month- it can be seen that the MOON WATER, or MONTHLY WATER suggests mentrual blood. Thus, this shrine could be called the MENSTRUATING ROCK SHRINE ( or just The Mon Water Rock Shrine, if you like!) 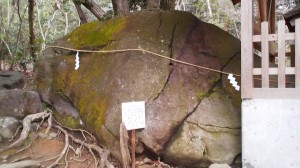 A closer look a the sacred Menstruating Rock 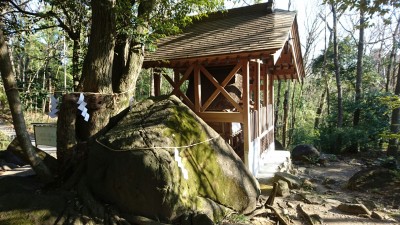 Just when worshippers started coming to pray to this strange stone no one is sure. It is certain, however, that this area has been considered sacred since ancient times. In fact, all of Mt Tsukuba was believed to be a manifestation of the sacred MALE and FEMALE forces because of its twin-peaked shape. Many believe, from suggestions in various extant poems ( from the Manyoshu) and texts ( the Hitachinokuni Fudoki) that at one time this sacred mountain was OFF-LIMITS- except for the occassion of certain festivals. If that were the case, it is possible that the FEMALE ROCKS ( those with cracks, holes, or slits in them) now found at the GASSUISEKI Shrine and the Iina Shrine ( a few hundred meters down the slope) were the closest that early worshippers could approach the mountain. 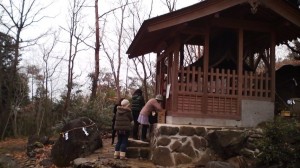 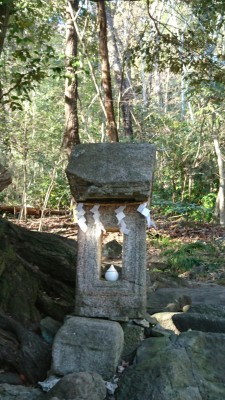 Diminutive stone shrine (ishi hokora) next to the main shrine. What makes it distinctive is the hole in its center. The “jewel” shaped jar placed in it represents the “male force” conjoined with the “female force”.

In Japan,certain stones were/are worshipped not only because of their curious shapes ( representing various forces- such as the male and femalel) they might have. They also represent the unchangeable, the unageing,- in other word, the immortal. At some point ( probably not in the very distant past) this spot was connected with more mainstream Japanese religion by officially having the Shinto deity Iwanaga Hime ( Princess Longstone) enshrined there. 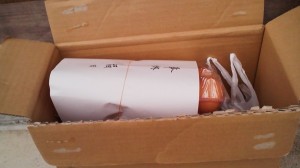 A whole box-full of eggs-of-thanks, some of which will be taken by those who are praying for a child

The story of this deity is quite interesting- a tale which explains why the descendants of the Gods- the Imperial Family ( and I guess all humans, as well), do not go on forever- like stones- but fade away…… like flowers. Princess Longstone ( Iwanaga Hime) had a sister, Princess Blooming Flower (Konohana no Sakuya Hime). Their father, O-Yama tsumi no Mikoto, presented them both as brides to the deity Ninigi no Mikoto- who married the Flower Princess but REJECTED the Stone Princess, because of her looks- and sent her packing. Her enraged father declared that from them on, the products of Nininigi`s marriage ( the Imperial line, according to Japanese myth), would not last forever like stone, but would fade away and perish- like the flowers. 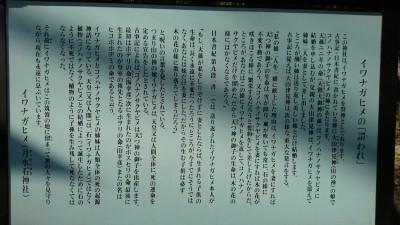 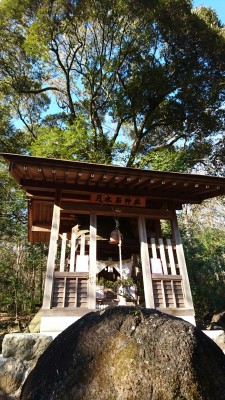 The Gassuiseki Shrine on the evening of March 12th 2018

I had only a couple of free hours this morning, but decided to spend them at the shrine- because today was the day of the spring egg festival! Negotiating the  impossibly narrow road leading to the shrine is a nerve-wracking experience on any day of the year, but when it is packed with cars and pedestrians – like it was today- it is nothing short of ridulous! ( if you do go for future festivals park somewhere down below and walk!) 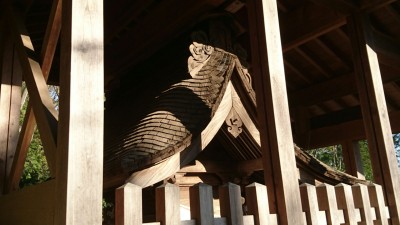 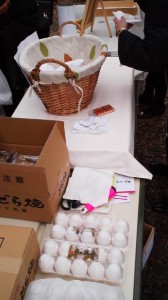 The receptionist handing out amulets and lucky eggs (500 yen)

Despite the cold ( maybe the worst so far this winter), there was a warm sprit wafting in the air as worshippers who had come from near and far excitedly entered the woods (and crossed over some pure-watered babbling brooks) to the mysterious stone and its new shrine building ( repaired since the earthquake of  March 2011). There were some, however, those who had come to beseech the shrine for help, who seemed to had desperation/ despair in their eyes. 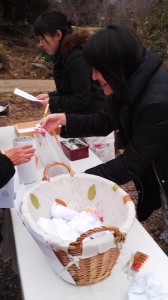 The (uncooked) eggs are wrapped in paper

Mostly, though, it was all good cheer and good company. Not only could we enjoy a pleasant stroll through the woods, but the caretakers of the shrine had prepared food and sake ( rice wine) for all comers. It easted even more delicious sitting under the big old plum tree which had just started to bloom- like an egg, a symbol of the coming of spring. 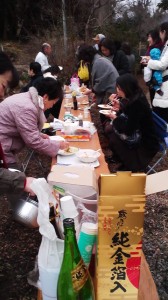 After praying at the shrine and receiving their EGG, worshipers enjoyed some (free) local food, tea, and sake with bits of gold leaf in it

Later, at the library, I learned that during the Edo Period, when there was a pleasure quarter in the area to accomodate pilgrims to the mountain, the girls who works in the brothels and tea houses would frequently worship there ( though I`m sure that it was not for pregnancy, in there cases). 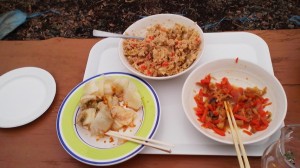 Some of the delicious homemade dishes we were served

Later ,looking at the egg that I had brought back from the shrine, I realized that it was eggs probably COULD have been effective in helping women in past ages conceive a child- back in the days when nutritious food was rare and meat or eggs almost never eaten. 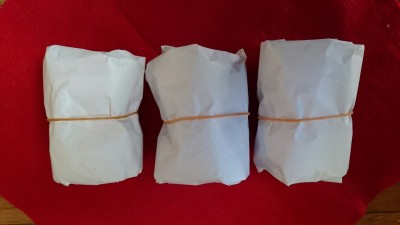 Some of the eggs, blessed by the shrine`s priest said to be effective in helping a woman conceive. There are two eggs in each little packet. 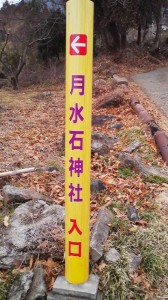 Gassuiseki Jinja is located in Usui, Tsukuba – on the lower slope of the mountain just above the ancient Iina Shrine, where the annual Benten-sama Market is held (usually in February).

For a “drop of the pure”, I recommend a stop at the nearby Inaba Shuzo Sake Brewery (which makes the Minanogawa Brand of Sake) – before or after your visit to the shrine.

Here is a how to get there. 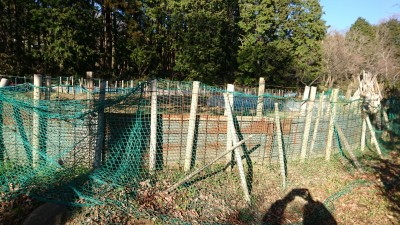