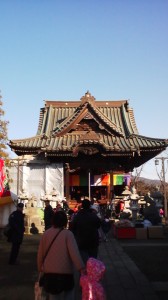 Last year on the day of the MAME MAKI Festival at the KOSODATE KANNON ( KEIRYU-JI). The silver sheet on the left was put up for protection from the frosty winds blowing on that day.

For centuries, when parents and grandparents in the villages and towns of Southern Kanto have wanted to pray for their children`s growth, health, safety, and future success, they have come to a temple associated with the Shingon Sect of Buddhism, located near the banks of the Sakura River in the neighborhood of Izumi, near the foot of Mt Tsukuba. Though officially bearing the name KEIRYU-JI (慶龍寺)- as it was founded by a priest called KEIRYU-SHONIN back in the year 1618, it is much more commonly ( and affectionately) referred to by locals as the Izumi Kannon Sama ( The Izumi Goddess of Mercy Tempe) or the Izumi Kosodate Kannon( 泉子育観音 )- The Izumi Kannon of Childrearing Temple. 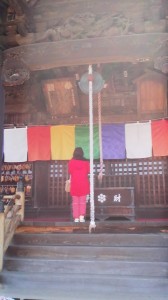 A woman praying at the Kosodate Kannon in Izumi, Tsukuba

The reason that the temple is associated with the Buddhist Deity Kannon ( whose name literally means ONE WHO LISTENS to the suffering of others – and who in Japan has evolved from a male to a female deity- a universal MOTHER of sorts) is that housed in its Main Hall is an image of Kannon said to have been carved by the great Priest Kukai himself ( the founder of the Shingon Sect) in the year 807.

It is believed that this image was originally placed in Kukai`s temple in Kyoto- To-Ji (東寺) as a supplication for the healthy growth of children in general.

In 1472, however, this image was taken to a temple called Kannon-Ji in the town of Odawara in what is now Kanagawa Prefecture. There, this image became venerated over the years as it was believed to answer the prayers worshipers who prayed to it. It is even said that in the late 15th century, the man who would later become Shogun and founder of the Tokugawa Dynasty- Tokugawa Ieyasu had beseeched this Kannon for aid in battle. And since he did go on to spectacular achievements on the battlefield he remained a devotee of for the rest of his life. 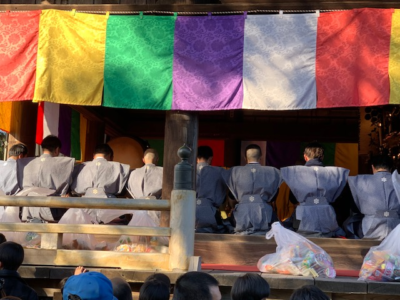 Some of the local men inside Keryu-ji getting ready For tossing the goodies. 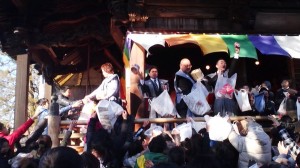 Snacks and rice cakes are tossed out of the Main Hall of the Keiryu Ji Temple on February 11th at 1, 2 and 3 PM. 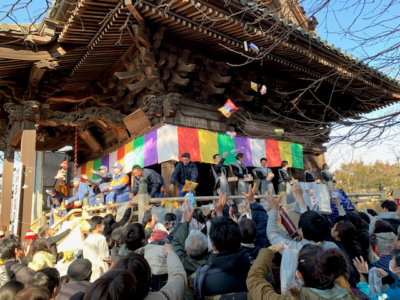 Snacks being tossed and grabbed to the accompaniment of drums and conch blasts.

Then in the year 1615 ( already 15 years into Tokugawa Family rule), the head priest of the Kannon-Ji Temple, the above mentioned KEIRYU-SHO-NIN (慶龍上人) is said to have had an impressive dream- in fact, he had the same dream for seven successive nights! In it, the Image of the Goddess of Mercy appeared to him and said ( and I roughly quote): Take me quickly to the East, so that I can save all children there in need of my help!

Taking the dream in all seriousness, the priest packed up the Kannon image and headed eastward. As he approached Mt Tsukuba, there was heavy rain, and the Sakura River swelled and sped up, making it difficult to cross. He thought he would have to wait until the waters calmed down and receded. But suddenly, a youth appeared with a boat, and offered to ferry him to the far bank. When they successfully made the crossing, the boy vanished into thin air ( according to the story) and Keiryu saw the image of the Kannon (which was still in its crate) hovering over the river.

He realized then and there that this was a special spot and decided to set up shop near that same bank of the Sakura, in the village of Izumi ( now part of Tsukuba City).

The image quicky gained numerous devotees who believed it had helped bring about a cure for their children`s illnesses and by 1618 Keiryu was able to build a proper temple on the spot. 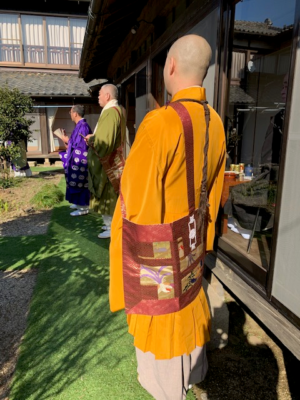 Some of the Shingon sect priest who came for the event

The Lords of the Tsuchiura Domain ( the Tsuchiya), who controlled Izumi for much of the Tokugawa Period were generous supporters of the temple (one of its extant gates was a gift of the family in 1687. Whenever they toured their lands ( which always needed more children- to increase the population of their domain) they would almost surely make a pilgirimage. 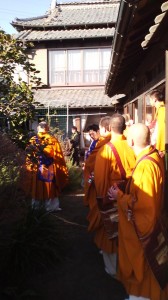 Before they head for the temple`s main hall, a group of priests gathers to the call of drums and conch

In the present age, the Kosodate Kannon is still a popular place to pray for anything related to children- their health, welfare, safety, good behaviour AND their conception.

It is one of the most popular spots  ( among locals) for November`s SHICHI-GO-SAN celebrations for girls of 3 and 7 and boys of 5 years of age ( strictly speaking the effects of this temple are only supposed to be for children up to the age of 7).

It is also popular for locals to take their newborns their to be blessed ( and to get an appropriate amulet). They even have ceremonies which supposedly calm down kids who throw tantrums or are uncontrolable.

Pregnant women also come for blessings ( usually on Days of the Dog, according to the Japanese zodiac. This is because dogs  symbolize easy delivery) 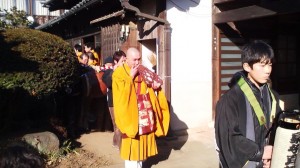 Leading the procession of monks is a conch shell blower

As for me. I like to visit the Kosodate Kannon because of its location – near a beautiful bend in the Sakura River in a rustic old hamlet which time seems to have passed by- its beautiful structures ( including a bell tower which was moved from Mt Tsukuba to escape the crazed anti-Buddhist activists of the early Meiji Period)- to enjoy its seasonal flowers and blossoms- and to chat with the friendly priest. 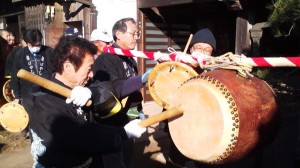 Followed by these drummers

There are also some interesting annual events. In fact, this weekend – the MAME MAKI FESTIVAL, held every year on Feb. 11th, will take place.. 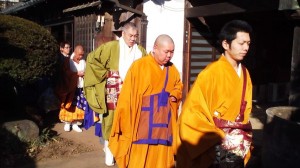 and the rest of the guys

These February temple or shrine MAME MAKI events are always popular- because they involve the distribution of gifts: usually soy beans, rice cakes and snack foods. These are not not handed out but TOSSED to the gathered crowds ( by celebrities if its a really famous shrine/temple) and TOSHI OTOKO- men of unlucky age ( usually 42). Being able to come away with some booty is not only fun and tasty but is supposed to bring good luck as well ( and it seems to me that at these event there are always a few people who are truly NEEDY and are there for the chance to get some free food). 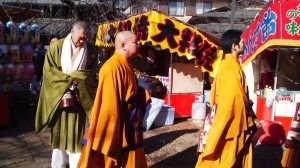 Here is a report of my previous prticipation in the MAME MAKI EVENT:

Arriving at the temple today ( it is not far from HIGASHI ODORI just north of KEK), I was jarred by the sight of crowds of cars,people and YATAI (food and toy stalls) in aplace where I am often the only visitor.

I realized I was just on time as drumming had just started up. I approached the main hall where priests were chanting to the beat of drums and the occassional ringing of bells or chimes. The hall was full- of priests, Toshi Otoko, and other parishioners. I noticed the sacred fire which the head priest was feeding ( these fires- GOMA TAKI– are an important feature of Shingon Buddhism) as its flames flickered over the heads of those blocking my view. 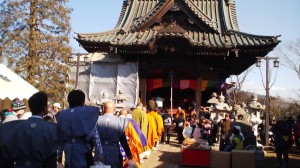 It was funny ( and made me feel very self-conscious) that just as I arrived at the side of the main hall, a young police officer stood right behind me and cautioned everyone ( with his bullhorn) to beware of pickpockets! ( though later in the afternoon I realized that he did this every time the drumming sarted up and not just because I was there!)

Soon a crowd built up on one side of the hall. The preists were still chanting what I thing was the HANYA SHINGYO SUTRA (know in English as the Heart Sutra) . When they finished, the crowds pushed closer to the side of the hall and excitement started to build.

The TOSHI OTOKO dress in blue coats got up and chanted- ONI WA SOTO FUKU WA UCHI ( evil out, good fortune in!) and took up the bags full of goodies placed around them. 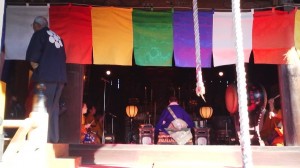 As they showered the crowd with their gifts I realized how dangerous this was- mochi rice cakes are hard and heavy! Getting one in the face would not be very pleasant! Then there were the little kids- and the very old- all scrambling in a frenzy for packets of cheap munchies- with the greatest prize probably being a bowl of instant ( cup) noodles! Nothing worth dying or permanent injury for. 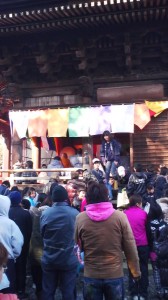 A crowd gathers as the ceremony begins

When all the bags are emptied the crowds also quicky clear, with all the people having pulled back to take stock of their booty.

Few leave, however, as soon the next session will begin!

About 30 minutes later, the sound of a conch ( an instrument associated with Shingon Buddhism and Mountain Asceticism) could be heard blowing. I noticed that in the priests little garden ( his house is the temple`s compound) all the priests and the Toshi Otoko had gathered. The conch was soon joined by drums which were on poles born on the shoulders on some  men. This group soon formed a colorful ( and atmospheric) procession which walked over to the main hall ( the biggest impression for me was one Toshi Otoko who marched carrying a picture of someone who assumed was his father who had probably recently passed away). 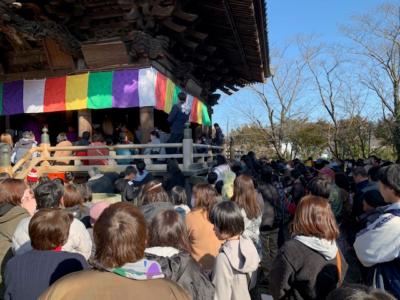 And continues to grow

They then settled into the main hall again and started the chanting, drumming, and the sacred fire once more. The police office called out his warning. 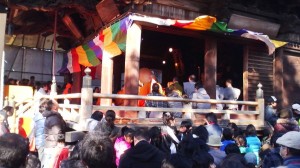 All in all I came away with lots of good stuff ( after having elbowed away a few old ladies!- only kidding) and munched happilly along as I walked toward the riverbank where I took a little rest and tried to conjure up in my minds eye KEIRYU-SHONIN trying to cross the river and then setting up his first little hall at that place. With only the river, the trees and the birds there with me, this was not so hard to do. 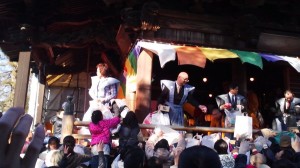 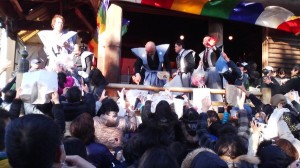 An image of Fudo Myo`o
(one of the most commonly found motifs at Temples of the Shingon Sect) in the Fudo Hall just in front of the main hall. The dragon (strongly associated with water in Japanese traditional culture) sits in a stone washing basin. 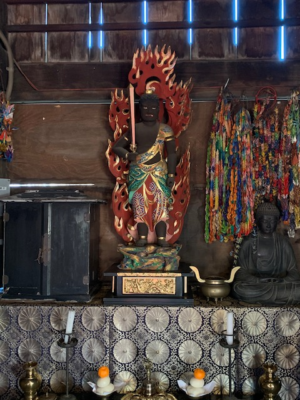 Another Fudo Myo`o inside the main hall. 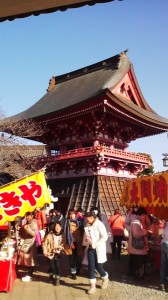 This structure (A BELL TOWER) once stood on the grounds of what is now the Mt Tsukuba Shrine. It was removed to this spot to escape the destruction of anti-Buddhist fanatics after the Meiji Restoration 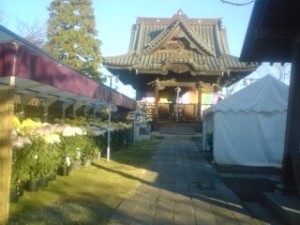 Izumi Kosodate Kannon in autumn with its path lined with chrysanthemums 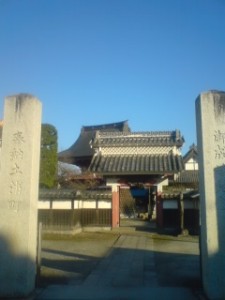 Here is the temple`s HOMEPAGE: 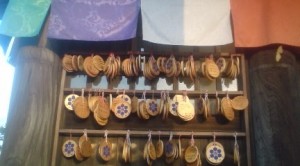 The unique E-ma tablets which are bought, inscribed and offered at the Izumi Kosodate Temple by families praying for easy delivery or the health safety and success of their children 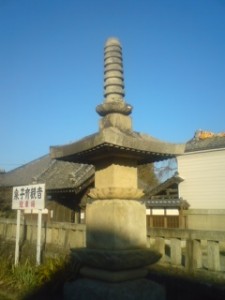 An interesting stone monument at the Izumi Kosodate Kannon Temple in Izumi, Tsukuba 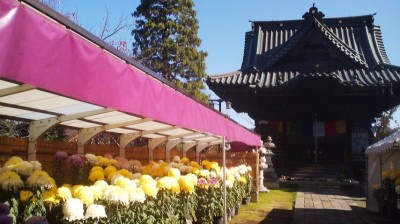 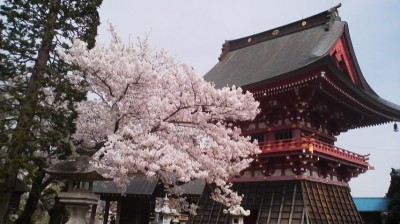 The Izumi Kosodate Kannon is a great spot for viewing cherry blossoms in April (in the background is the bell tower which was brought down from Mt. Tsukuba`s Chuzen-Ji Temple in order to save it from anti-Buddhist fanatics in the 1870s 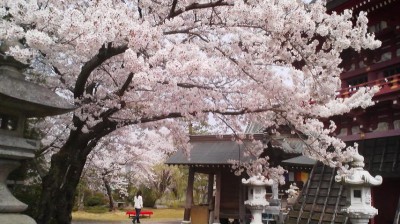 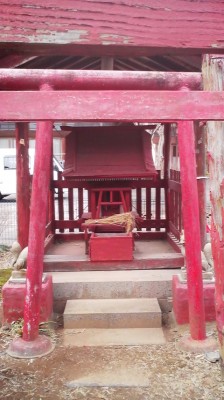 An Inari Shrine in Izumi, Tsukuba- a short walk south of the Keiryu-Ji Temple (in February you will find fresh offerings of SUMITSUKARE wrapped in straw) 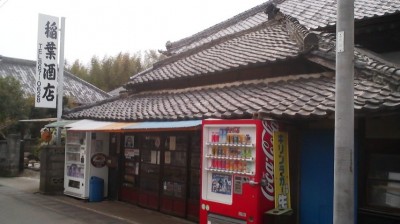 An old sake shop in Izumi, Tsukuba. To get to the Inari Shrine (pictured above) and for a nice view of the Sakura River, turn right here (walking south from the temple)

A short walk form the temple provided this special view of Mt. Tsukuba and the sandy banks of the Sakura River.