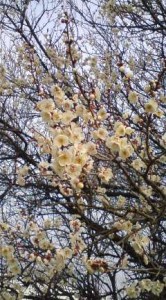 Even in Japan’s mild-wintered Kanto region, in most years, on February 4th, radio and television weathercasters can do nothing but complain about the inappropriately cold weather. This year, however, on that day, afternoon temperatures actually reached a toasty 14 degrees centigrade, an unusual case of the weather properly befitting the occasion, Risshun (立春), the first day of spring. And, as an extra treat, many of Tsukuba’s plum blossoms (ume no hana), Japan’s symbolic harbingers of spring, burst into bloom (perfectly on cue) on the very same day! These earliest blooming of Japan’s popular flowering trees are also its most fragrant, and yesterday’s warm breezes might have carried their thick, sweet, syrupy smell to your nose.

The traditional Japanese calendar is divided into 24 equal sections called SEKKI (節気), which creates an idealized, perfectly balanced four-seasoned year. The first day of spring is determined as the exact middle point between the winter solstice (冬至, toji) and the vernal equinox (春分の日、shunbun no hi), which usually has RISSHUN fall on February 4th. Subsequently, we have the first day of summer (Rikka, 立夏) on May 5th this year, that being the day equidistant from the spring equinox and the summer solstice (geshi, 夏至）. The other two seasonal turning points, the first day of autumn (risshuu, 立秋) and the first day of winter (rittou, 立冬), are determined in the same manner, creating four seasons, each ninety days long. 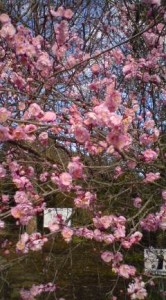 When Japan still followed its old calendar, Risshun, the first day of spring, was also the first day of the new year, the day on which all Japanese would grow one year older together. That is why on the evening of the previous day (February 3rd, this year), it is the tradition to eat the same number of soy beans as your age (sometimes plus one!), in what is called the SETSUBUN festival. Another name for the evening before RISSHUN was TOSHI NO YORU (歳の夜), which could be translated as the BIRTHDAY EVENING.

Of course, the Japanese seasonal divisions are not usually in accordance with meteoroloigical realities, as the coldest days of the year usually hit during the weeks AFTER the first day of spring, and in many parts of Japan the snow remains deep. There is even a famous expression and lyric to a well-known song which goes “HARU WA NA NOMI” (春は名のみ), which means “spring in name only”. Despite the cold of early spring, for the Japanese it was the OCCASIONAL warm breeze, the stirring of certain plants and animals and the blooming of the plum blossoms (especially on snow covered branches), that is to say the little CHANGES and HINTS which gave hope and expectation of things to come that were what early spring was recognized as and appreciated for.

The blossoms of the plum tree (ume no ki), which has been bred into such numerous varieties since being brought to Japan more than 1000 years ago by returnees of missions to various Chinese dynastic courts, rival those of Japan’s national flower, the cherry blossoms (sakura no hana) in terms of endearment in the hearts of the Japanese people. In fact, in the early Showa Period, there was a heated debate over which of the two WOULD become the national flower. The plum’s strong points were not only that it was beautiful and highly fragrant and the first major blossom of the new year and thus symbol of spring’s coming, praised so often by Japan’s greatest classical poets. It was also a unique feature of the DAILY JAPANESE DIET in the form of UME BOSHI, or salted plums, as well as a popular ingredient for liquor and juice. It was probably the fact that plum blossoms were already the national flower of China (which they still are in Taiwan), and had been introduced to Japan from there that the UME lost out. Of course, there is also the matter of the more delicate cherry blossoms being more representative of the quintessential Japanese notion, MUJO, the fleeting nature of all things.

(If the East wind blows this way, send your fragrance to me, o plum blossoms,
even though I am no longer there). 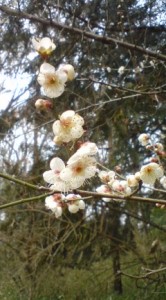 Luckily for those of us who live in Ibaraki, Mito, our prefectural capital is the home to one of the most famous places for enjoying plum blossoms, KAIRAKUEN. The ume festival there will begin toward the end of this month.