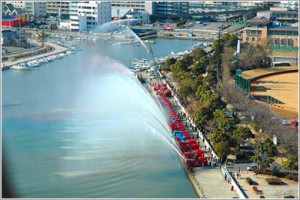 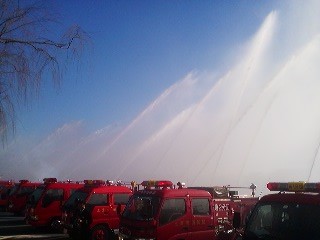 As their sirens blare out all at once, dozens of fire-trucks, a fire-boat, and a fir-helicopter let go with their hoses at full blast!

Traditionally, the Japanese have always made a fresh start in EVERYTHING after New Year`s. In fact, this used to go so far, that on the the first day of the first month of the year, all people were considered to have aged together by one year ( even a baby which had been born a week earlier!).

And though now there are INDIVIDUAL BIRTHDAYS ( though interestingly 20 year-olds still celebrate their coming-of age together as a group in January). as well as additional new beginnings such as the new SCHOOL YEAR and FISCAL YEAR ( which start in April in Japan)- all sorts of NEW BEGINNINGS are still commonly recognized and celebrated.

There is the first visit of the year to a shrine or temple ( Hatsu MO-DE, 初詣), the first sunrise of the year ( HATSU HINODE, 初日の出), on the morning of January first, the first dream of the new year on the night of the first (HATSU YUME), the first CALLIGRAPHY of the year (KAKI ZOME, 書初め) on January second, and the first tea ceremony of the year- HATSU GAMA (初釜）.

There are special expressions for FIRSTS OF THE YEAR of almost every kind. There is even a special term for the first sexual act of the year- HIME-HAJIME!

Traditional acrobatics on a ladder, in front of Tsuchiura Station- at the Dezome Shiki 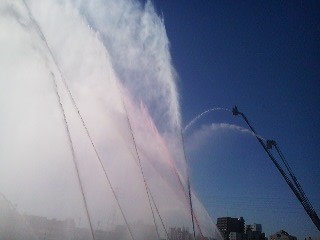 For centuries ( ever since it first began in 1659) one of the most anticipated FIRSTS of the New Year ( because it is great, free entertainment) has been the DEZOME SHIKI, 出初式 ( pronounced DEH ZOH MEH), in which the fire brigades of Edo/ Tokyo have come out right after O-Shogatsu ( the Japanese New Year Holiday) to display their equipment and perform acrobatics in order to show off their readiness and skills with the use of ladders and other tools of their trade.
This type of event was originally conceived with the notion of instilling a little confidence into the residents of Edo ( Tokyo`s former name) in regard to the new fire fighting system which had been established after nearly the whole city ( including Edo Castle! ) had burned down in 1657.
In other words, the DEZOME ( whose Kanji Characters mean: coming out for the first time) was meant to show the people of the city that the fire brigades were well-equipped, ready and able, when it came to controlling and putting out fires.
And these Edo Period firemen DID indeed have their hands full as conflagrations continued to be a common feature of life in the city. So much so that they were referred to as the Flowers of Edo -Edo no Hana （江戸の花）- an expression which was used in order to avoid saying KASAI (火災) – fire, which was considered an unlucky word.( I have even read one Japanese historians theory that the Flowers of Edo refers to the firemen themselves!*). 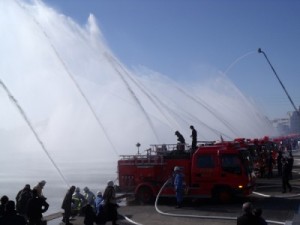 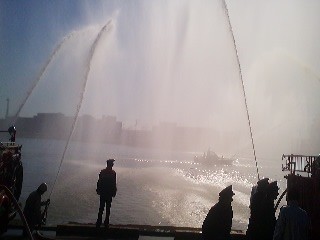 With the sirens blaring and all the hoses spraying at full force you might feel as if you are in the center of a storm- or a war zone!

Even after the fall of the Shogunate, these beginning-of-the-year ceremonies have continued to be held.
In the Tsukuba area, probably the most impressive DEZOME SHIKI is the one held in Tsuchiura City.
Last year`s (2019) event w held on the 6th, and with the bravery and undaunted efforts  Japan`s firemen showed at the damaged nuclear power plant in Fukushima and during the rescue and relief work after the giant Tsunami 2011  remembered by many of us there, it was not only exciting , but moving. 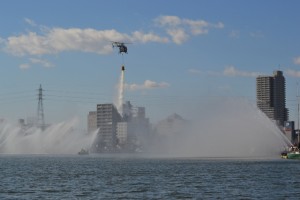 Water from firetrucks, fireboats, and a helicopter at the climax of the DEZOME CEREMONY 2012 ( photo taken by Lacus Marina)

At around 10 am, a procession of shiny firetrucks had gathered in front of Tsuchiura Station, and traditional acrobatics were performed. 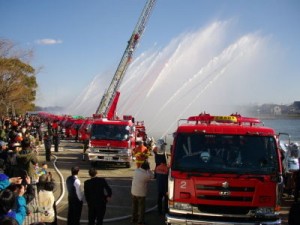 At around noon, the center of attention turned to the harbor ( on the other side of the station), where these same trucks, along with fire-boats and a helicopter, unleashed their full water power. It was quite awesome, even frightening- as all the fire-trucks sound their sirens at once- and as I have already said, it was also moving- especially with the helicopter dumping water in the same way it did as we anxiously watched in the first days of the nuclear accident.
In his greeting to the public, the fire-chief stressed how this season, because it is so dry, is extremely dangerous in regard to the spread of fire.
please keep that in mind.
There should be DEZOME SHIKI being held in cities throughout Japan this month. If you are in Yokohama, you might want to check out the one there. It begins in front of the AKA RENGA ( red brick warehouses) which are a well known landmark in that city. 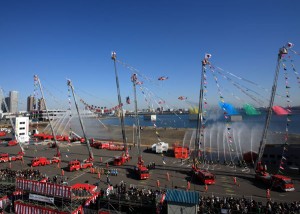 On a larger scale- a DEZOME SHIKI in Tokyo

* The actual expression is KAJI TO KENKA WA EDO NO HANA （火事と喧嘩は江戸の花）, which literally means: Fires and Fisticuffs are the Flowers of Edo.

As I have mentioned above, this is usually taken to mean: Edo is famous for its Fires and Fist-fights.

However, it is also possible to interpret this expressions as meaning that Edo`s Firemen are the City`s  Cherry Blossoms ( flowers which represent dying while still in ones prime). The reason for this is that the various fire brigades of Edo would fight it out on the street ( in spectacular battles) to see who would get to put a fire under control. Since both the firefighting AND the street-fighting were perilous activities which could result in death, the firemen were HANA- cherry blossoms. 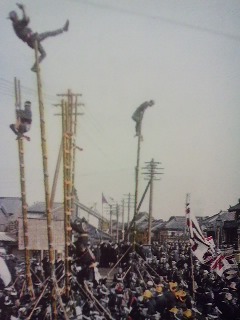 The most impressive part of the day`s events was the water-spraying (from fire-trucks, boats and helicopters. This began at 11:50 AM at the Kawaguchi Marina within ten minutes walking distance of Tsuchiura Station`s east exit (when you leave the station go out to the main road and turn left. Walk to the next corner and cross the street.

8:30 AM : A ceremony in the parking lot of the Tsuchiura Citizens Hall (Tsuchiura Shimin Kaikan, 土浦市民会館)

9:00 AM: A ceremony inside the Citizens Hall

11:10 : A procession departing for the other side of the station (beginning at the Urara Square)

11:55: Water-spraying, from trucks, boats and a helicopter (on the eastern side of the station- see above)- if your children are sensitive to loud noises, you might want to skip this part as the sirens all blaring at once can be overwhelming. 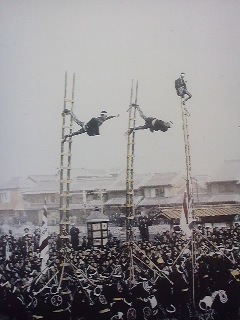 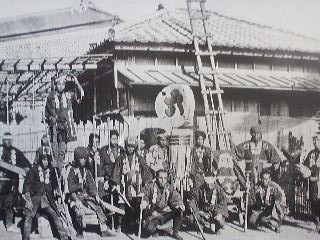 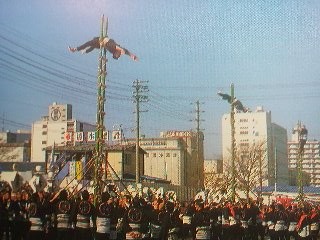 A DEZOME SHIKI in Tokyo 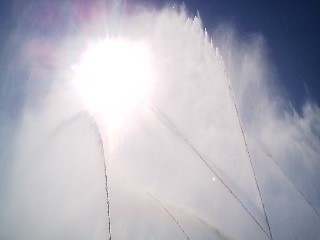 The hoses spray into the sky