Greeting the New Year the Traditional Way, at a Temple or a Shrine Can Be a FROSTY EXPERIENCE at Midnight- Make sure to Bundle Up!- or stay home and watch tv like most Japanese! 1 January, 2020 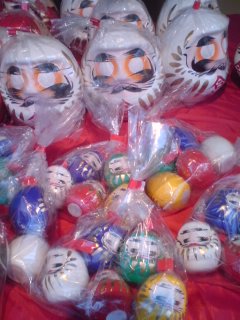 According to the old Japanese calendar, the last day of each month is called MISOKA (晦日). The last day of the year is OH-MISOKA (大晦日), with the preｆix OH (大） meaning big , great or grand. The expression JOYA (除夜） is used for the evening of the last day of the year.  Directly translated this means the evening of removal (of the year). Traditionally, by OHMISOKA, Japanese families should have completed their preparations for welcoming their ancestral spirits and the Toshigami-Sama (God of the New Year), by cleaning their houses, setting up proper New Year’s Decorations, pounding mochi rice cakes, and making (or buying) all the other appropriate New Year’s dishes.

Until 1873, when the Meiji government decided to adopt the western calendar (and the western clock!) the new year began at SUNSET, and not at midnight! Thus, in the old days, the JOYA NO KANE (end of the year bells) were sounded in the evening, and families would greet the Gods just after sundown as well.

I wish this were still the case today! The way O-Shogatsu is celebrated at midnight these days makes staying up to hear the bells and visiting a shrine before and after midnight (futsuka-mohde, 二日詣 , a two day shrine visit) a CHILLING experience (despite global warming!) Thankfully, most temples and shrines get a bon-fire going and give out hot amazake. 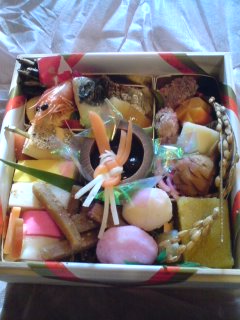 Don’t worry. Even if you dont care to brave tonight’s cold and make it to Hatsumode (first shrine visit), you have plenty of time. It can be done any day within MATSU NO UCHI (the first seven days of the year). And to tell the truth, the jam packed hatumodes at the large shrines that we have today, really only date from the Meiji Period (maybe that is why Meiji Shrine is the most popular spot for it with more than 3,000,000 worshipers!) The real traditional way to go about it would be visiting your UJIGAMI-SAMA, the local guardian shrine of your area (you can ask your neighbors (if they are locals) where it is. If you are Japanese, or were born in Japan, it would be best to pay a visit to your UBUSUNA-GAMI (the guardian shrine of the place you were born. 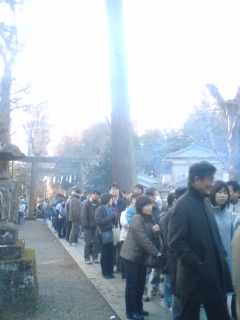 Last year on the morning of New Year`s Day, after partaking of some traditional O-Sechi dishes (not very tasty, but bursting with symbolic significance and keeps for 3 days), I headed off to one of Tsukuba’s most popular HATSUMODE spots – Ichinoya Shrine. When I got there, I was surprised to find that despite the bitter cold there was a very long line leading to the main hall where the money is offered and prayers are made (after ringing the bell, bowing, clapping twice, and then bowing again). Of course, people were also purchasing DARUMA dolls (for making a wish), HAMAYA (arrow-shaped amulets) and drawing their fortunes. Those not satisfied by what their OMIKUJI (fortune) said tied them around trees or their branches within the shrines precincts. Also, behind the shrine, many were disposing of last year’s darumas and other religious or seasonal decorations, as these objects should not be thrown in the trash. 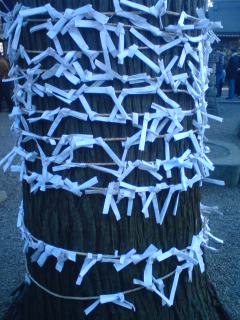 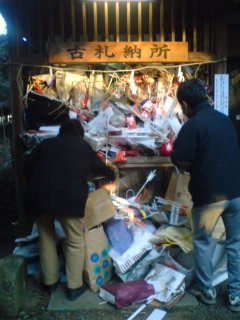 If you’d like to experience some real holiday energy, I would recommend visiting one (or two) of the more popular HATSUMODE spots (Asakusa’s Senso-Ji is very convenient by TX) over the holiday.

Meiji Shrine in Harajuku, Narita-San, in Narita and Kashima Jingu (the most important Shrine in Ibaraki) in Kashima, would also be interesting.

I have written in detail about O-Sechi, New Year`s Dishes :

I HAVE written about a very obscure, but interesting belief associated with O-shogatsu ( and mice!):

And finally, I offer you an original song asking: Where does all the time go? Enjoy:

And for tonight, if you are interested in hearing the Joya no Kane with the comforts of the warm indoors, Mr. Mamoru Shimizu has written to inform us that there is a small bell inside the Eko-In Temple in Ninomiya, just near Doho Park. Read the comment to the post on Joya no Kane for more details.

But if you are not up to facing the frost, or if you`ve got little kids, you can just spent new Year`s Eve as most Japanese do- watching TV! The most popular show to watch is NHK`s KOHAKU UTA GASEN which features the music of this past years most popular performers in several genres ( which makes large portions of the show boring for certain age groups- i.e. the enka for young people, or hip hop for older folks, as well as some old favorites.

While watching it is common practice to chain-peel mikan oranges.

No matter what you choose to do tonight- enjoy

Have a Happy New Year !