When the Smoke Clears Away ( on Saturday January 25th) at the HIRASAWA KANGA (平沢官衙遺跡) What SPECIAL WORD Shall Be Revealed ? (weather permitting) 22 January, 2020 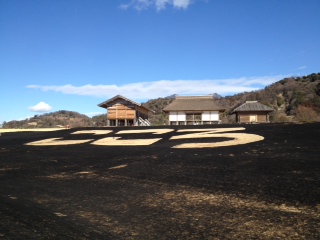 (From a past year) The grass in front of the reconstructed buildings of the HIRASAWA KANGA was burned- except for a few patches which spelled the word KOKORO (heart, or spirit)

By Avi Landau
The local farmers tell me that in the morning hours there is LITTLE WIND during Tsukuba`s winter season- which is usually the windiest time of year here. I guess that that is the why the SHIBA YAKI (芝焼き) grass burning ceremony held in front of the HIRASAWA KANGA  ISEKI- a beautiful reconstruction of official Nara and Heain Period Storehouses in Tsukuba`s Hojo district, is scheduled for an early  9 AM start on a Saturday morning (the actual burning will not actually get underway until 10!): the calmer conditions help keep the fires from getting out of hand. 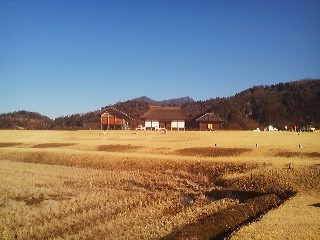 The Hirasawa Kanga site with the twin peaks of Mt. Tsukuba in background (The grass-burning ceremony will be held on Saturday January 25, 2020) 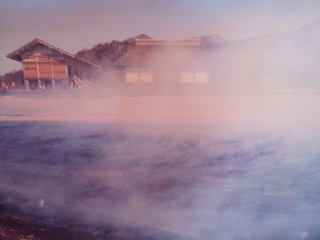 (The event as I experienced it in a past year)
It was a beautiful, crisp morning- with blue skies as far as the eye could see. On any day, the the site of the old KANGA (government offices)  is one of the most impressive in all of Tsukuba City. And when the weather is as perfect as it was, it is even more special.
So it seemed a bit odd (and ridiculous) when the sixty or so of us who had gathered there for the event were soon engulfed in a thick shroud of smoke!
What we were waiting for, however, would be revealed when the grass fires finally died out and the smoke cleared away-  a word, specially selected for this year- which was left on the slope (by outlining the letters in lime).
The word was KOKORO (こころ)- heart or spirit, and it replaced last year`s KIZUNA (きずな)- the ties that bind. 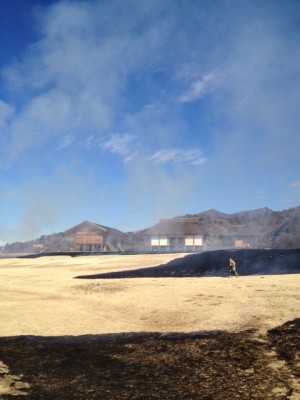 Why burn the grass at all ? I guess in a way you can say that the custom is a throwback, a reminder of the days when thrashing and burning was the way agricultural fields were prepared. Even when farming techniques became more advanced it remained the habit (and still is) of farmers to burn away what was leftover of last year`s vegetation and agricutural waste in and around the fields. Not only did this clear the field for fresh growth, it also killed the eggs and larvae of pests and the ash could be used as a soil enriching fertilizer.
And why burn the grass in a non-agricultural space? Well, in Japan one of the most difficult things to deal with- if you have a house with a garden- is the overwhelming power of the summer greenery. The plants overwhelm everything- and quickly- if you don`t take firm control of the situation. Haven`t you ever wondered why Japanese Zen Priests filled there gardens with sand and stones? It stops the weeds from growing- and decreases the number of insects! Burning the winter grass was another way of reducing the amount of weeds and insects to be dealt with in summer. It became an important pre- or early spring rite.  In some places, such as the Korakuen Garden in Okayama City or Akiyoshidai in Yamaguchi Prefectire, annual SHIBA YAKI (grass burning) events have become major tourist attractions (while here in Hojo, Tsukuba, it  has not yet caught on very much)
Still I`m sure you don`t feel very bad about having missed all this excitement. And you shouldn`t. Thats because the word (KOKORO) will stay emblazoned there for a long, long while and you can appreciate it anytime you happen to head out to Hojo to admire the reconstructed buildings and the rustic setting of the HIRASAWA NO KANGA- something that you probably should sometime during your stay in Tsukuba. 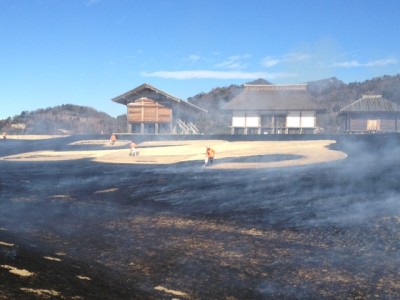 With blow-torches, the staff works on the bits that did not burn well- and eventually created the word KOKORO in the scorched earth 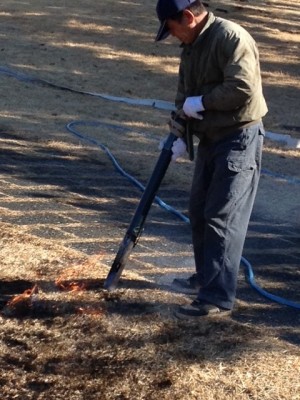 Setting the grass on fire at the HIRASAWA KANGA SITE 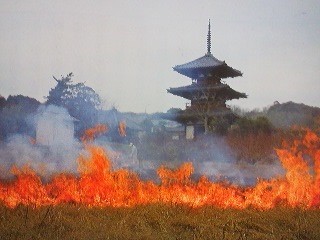 Burning the grass near a temple in Nara Prefecture

Way back in 1975, while carrying out a routine archaeological survey before the construction of a planned housing development, it became obvious that there was had once been  a set of very large structures at the site. This was evident from the presence of foundation stones, which gave a clear picture of the layout of the buildings- which exhibited a size and design rarely found among Japanese ruins. 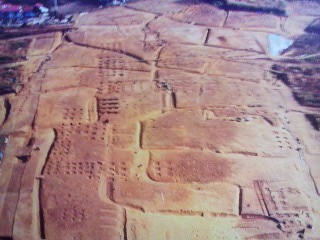 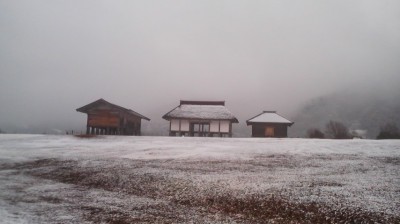 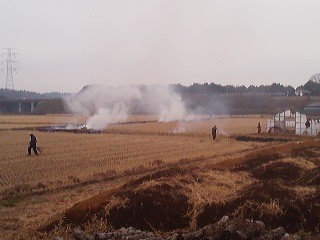 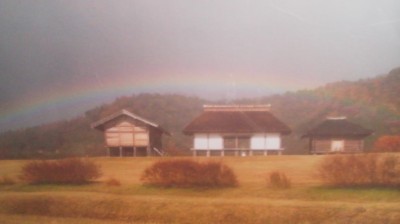 Hirasawa no Kanga with a rainbow 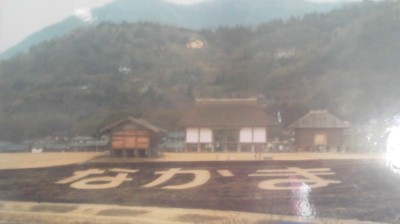 The special word for 2014 was NAKAMA- colleagues, associates, comrades, friends 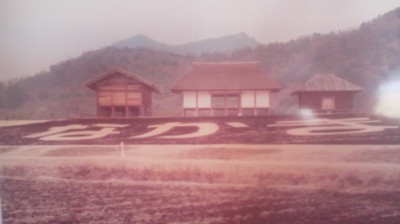