Coming-of-Age Ceremonies (Seijin Shiki, 成人式) to be held in Tsukuba on Sunday January 12th in 2020- and around Japan over this holiday weekend- A closer look at the evolution of SEIJIN NO HI ( Coming-of-Age-Day) 12 January, 2020 Outside Capio Hall in Tsukuba, after the Seijin Shiki (Coming-of-Age-Day Ceremony- if you`d like to take pictures of this year`s crop of new adults all dressed up (many in extravagant kimonos), head to Capio Hall near Tsukuba Center, for this weekend`s  ceremony (January 12th 2020) will be held from 1:30-3:30. Due to violent disruptions that have led to arrests in recent years there will undoubtedly be some beefed up security for today`s event !

Before 1877 (Meiji 9), when it was set at 20, there was no set LEGAL AGE in Japan for achieving adulthood. For the children of the nobility and the samurai class there was a coming of age ceremony known as GENPUKU (元服), for which there was NO specifically set age, though which usually took place when boys were in their early teens (from 12-16). The ceremony was performed when certain academic (knowledge of Buddhist Sutras and Classical Chinese Texts) and height (150 cm, or 4′11″) criteria were met. For Crown Princes and future Shoguns, the GENPUKU rites were sometimes held much earlier, when the boys were still 7 or 8 years of age. 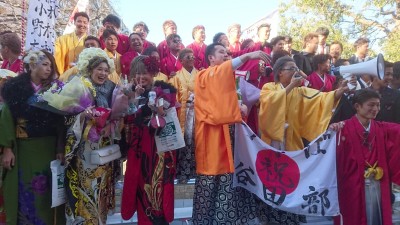 The Tsukuba Seijin Shiki offers an amazing contrast – a real sociological showcase- the nerdy, conformist, young adults (almost all of whom are now university students) from the Science City area schools- and the wild, rowdy, biker-types, who graduated Tsukuba`s rural high-schools (almost none of whom are in university). Some of the latter attended with children of their own.

The word GENPUKU (元服) came to Japan in the Heian Period (794-1185) along with the ceremony itself from China, though the characters used to write it, and of course the way it is pronunced have changed. The way it was written in Chinese was 冠衣, which means CROWN and ADULT ROBES, which were the symbols of having attained adulthood and which were donned for the first time at the GENPUKU ceremony. Another key feature of the ceremony was the bestowing of a new ADULT name on the young person. 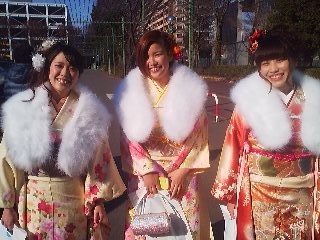 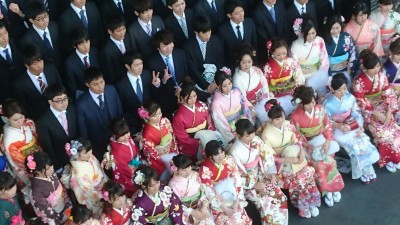 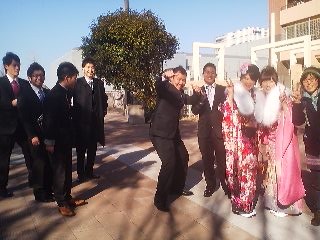 There is plenty of preening, posing, posturing and clowning around inside and around the venues at which the Seijin Shiki are held

Twenty-year-olds (and those who will turn twenty before the beginning of this April) with official residency in Tsukuba City, received a postcard inviting them to attend this year’s SEIJIN SHIKI, on Sunday January 7th at Capio Hall from 1:30-3:30. 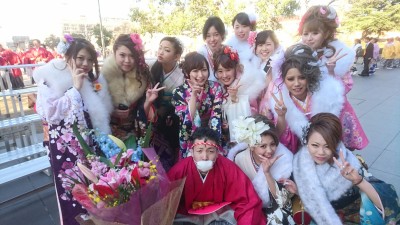 As Japanese society has been changing over the years, and the youth have become less submissive, it has become more and more common for incidents of unruly behavior to liven up, or mar (depending on how you feel about it) the ceremonies. The most famous place for rowdiness is certainly Okinawa, but these days such cases crop up all across the country. 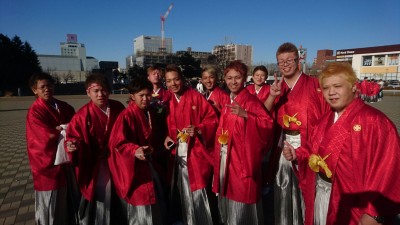 Tsukuba, with its high (though steadilly dropping) percentage of academically oriented, nerdy, goody-two-shoed young people, is considered a paragon of good seijin shiki behaviour. I guess that is why Ibaraki television now often keeps its Coming of Age Day coverage exclusively of Tsukuba. 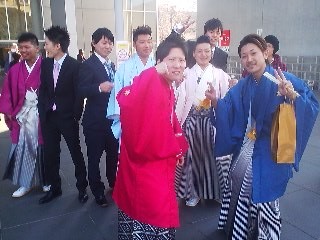 In recent years things have almost gotten out of hand, however. Two years ago,one  NEW ADULT grabbed a mike and started to address the crowd with an emotional “KORE DE II NO KAI?” (Are you satisfied with this — or with the way things are?). He was quickly whisked away by the staff. After the ceremony, when everyone was gathered outside Capio, this young man was still trying to get everyone’s attention. A sign of things to come? Unfortunately for him (or maybe for everyone) no one was listening. 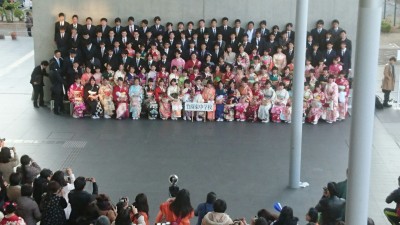 There is also a ceremony held at age 13, which is called JUU SAN MAIRI. I have written about it here

The Seijin Shiki Ceremony is a great PHOTO-OP, with all the 20 year-olds dressed to the nines- either traditionally or very eccentrically. Obviously there is also lots of good cheer in the air.

In Tsukuba the Sejin Shiki will be held this coming Sunday ( January 7th) at CAPIO HALL from 1:30-3:30. If you hang out in front of that venue before and/or after the closed ceremony, you will be able to get some good shots. 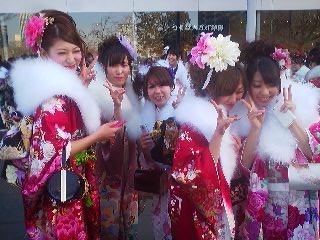 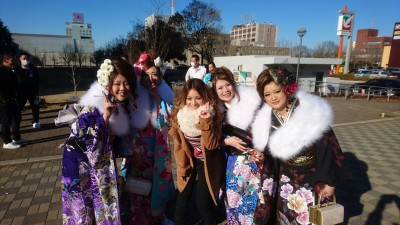 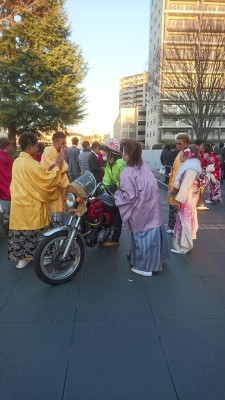 This year, as soon as the police left the scene, some motor-cycle gang members rode through the crowd revving their engines noisily