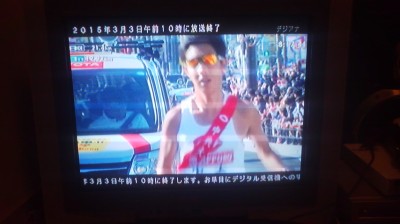 By surveying a large sample of random Japanese I was able to determine that watching the Hakone Ekiden Long Distance Relay Race was the most satisfying of the typical Japanese New Year`s activities (This will be especially true in Tsukuba this year as Tsukuba University is fielding a team in the race for the first time in 26 years!)

(I wrote this two years ago – but since the Ekiden starts today, and Tsukuba University will be participating after a very long absence, I thought it would be appropriate to re-post it)

My days off for O-Shogatsu, the Japanese New Year`s- so few, so precious, so looked forward to. What happened to them? Lost in the daze and delirium, the sweat,the stink and the chills of the flu. Ah –  All the best laid plans of mice and men…………..

But what is lost is lost- and can`t be brought back, so I am not going to cry over spilt milk. And in anticipation of next year`s O-Shogatsu I have been doing a little research, a little survey- all very unscientific, about how my friends and acquaintances spent their holiday, and how they felt about what they did- while I perspired, shivered and groaned.

Here is what I learned about how the Japanese spent a ‘TYPICAL’ O-Shogatsu and how they rated their experience: 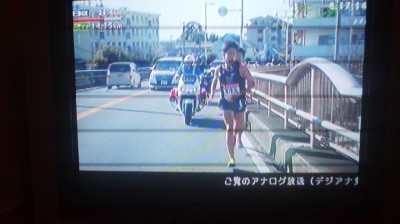 The Tokyo-Hakone Round-Trip College Ekiden Race, founded in 1920, is a marathon relay race held over a two-day period (the first day from Otemachi in Tokyo to Hakone- 108 km, and the next next day a return trip of 109 km). The course is divided into five segments each way. Interesting to Tsukubans and Tsukuba University alumni is the fact that the winner of that first Hakone Ekiden, run 100 years ago, was the Tokyo Koto Shihan Gakko,a teachers college that eventually came to be named Tsukuba Daigaku (Tsukuba University)!

1) Travelling (either domestically or abroad)- Exhorbitant holiday prices and mind-numbing crowds make even the most exciting and exotic New Year`s destination an exhausting ordeal – you need a rest after you get back home!

2) Getting together with relatives ( after journeying  for hours on jam-packed trains, planes, or highways) – the in-gathering of children, grandchildren, cousins,nieces and nephews turn a house into Grand Central Station. This can lead to exhaustion, shattered nerves and strained relations.

3) HATSUMODE visits to  temples or a shrines- freezing temperatures and long lines to the donation boxes can make these pilgrimages torturous.

4) Watching the first sunrise- losing precious sleep and enduring early morning frosts only to find that the sky is overcast.

5) Watching the end-of-the-year musical variety show KO-HAKU UTA GASEN- realizing just how cheesy Japanese pop culture can be. This iconic program can be a true test of endurance and ones sanity.

6) Checking the Results of the New Year`s Jumbo Lottery (to which you have bought 10,000 Yen woth of tickets)- You lose ! More money down the drain !

7) Eating traditional O-Sechi dishes- you pay 20 thousand Yen for a little box bought at a department store or spend 50 thousand trying to make the dishes yourself. Anyway with all the sake, soba noodles, and MOCHI rice cakes, your waistband will be rapidly expanding while you wallet (and bank account) slim down.

8) Buying a Lucky Bag (FUKUBUKURO) at your favorite shop- you find yourself with some more crap that you dont need – and with less cash (which you DO need ) !

Sounds pretty bad up to this point,,, right? Made me feel less bad about having caught the flu – but I did find that there were TWO very enjoyable ways to spend O-Shogatsu :

The first is called NESHO-GATSU （寝正月）- literally SLEEPING NEW YEAR`S, and it involves just that- plenty of rest and relaxation, mainly in the form of shut-eye (possibly fulled by alcohol).

The second, and what I found (based on my survey) to be the most fully satisfying way of spending ones O-Shogatsu holiday was watching the HAKONE EKI DEN – a long distance relay race in which universities located in the Kanto and Chubu Regions of Japan* compete over a two day period- January 2nd and 3rd. Broadcast on TV (starting at 7:30 AM and finishing at about 3 on both days) the race is watched by many millions and it is even said that over a million people gather along the coarse over the two day period to cheer the runners on.

It really surprised me to find out how many people I talked to watch this race every year ( though it really shouldn`t since in my own country- the U.S, millions also New Year`s  Day – and Thanksgiving Day, for that matter, watching college football)- and even more about how both men and women excitedly discuss it – its results, the individual runners, the strategies of the different coaches, the history of th event- even the rules of the sport itself, even long after it has finished.

Several years ago the EKIDEN was especially exciting, with first time (and underdog) winner Aoyama Gakuin University providing the heroics and and a new star- a petit runner with the unlikely name KAMINO DAICHI ( when the broadcasts say this name it sounds like they are saying God`s Great Earth!- and his mother is apparently a well-known sumo fan who can allways be seen sitting in the special MASU box-seats at the Nagoya Tournament).

This year, though, the hundredth anniversery of the Ekiden`s first run, has many Tsukubans excited (there were actually buses that took supporters to the race venue leaving from Tsukuba U. this morning).

So my New Year`s holiday was might be lost this year- but I`m looking forward to watching the EKIDEN – and rooting for Tsukuba U. !

* It was interesting for me to here that people from Osaka purposely avoid watching the HAKONE EKIDEN (even if they are great sports fans) because it is an exclusively Eastern Japan event – univerisities from other parts of Japan are not allowed to participate.