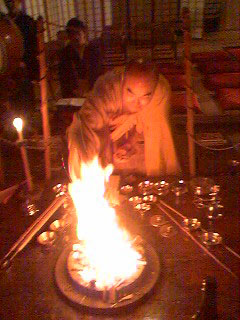 A Goma Taki fire-ritual on New Year`s Eve at midnight – at the Tofuku-ji Temple in Matsuzuka, Tsukuba. This ancient practice, which has its roots in India, is an important feature of Shingon Esoteric Buddhism, the most important sect in Tsukuba city, and the area around Mt. Tsukuba.

When a living organism or seed is carried by winds, ocean currents, or an animal host to a new and distant environment, it might fail to take to the unfamiliar surroundings and perish. On the other hand, there is some chance that it might take root in its new home and maybe even flourish.

The same holds true for the seeds of culture. It can probably be said that the mechanisms determining the success or failure of cultural transmission are even more complex than they are in the biological sphere.

Among the various types of vessels which can transport the spores of culture beyond their original boundaries, we can note invading armies, caravans of merchants, and very often, highly
influential individuals.

One such outstanding figure, Kukai (known commonly in Japan by his posthumous Buddhist name-Kobo Daishi 弘法大師), was single-handedly responsible for introducing to Japan certain ancient Tantric rites which originated in India more than 3000 years ago. These practices were carried across the Himalayas, and over the centuries spread throughout South-East Asia and also, puzzlingly, in Confucian China, whose cultural background would seem to have been hostile soil for most subcontinental concepts.

It was in the Tang Chinese capital of Chang-An in 804 AD that Kukai came into contact with the Master of Esoteric Buddhism, Huikuo (Keika,in Japanese), who believed that the Japanese monk was destined to bring the ancient Indian teachings to distant Japan where they would come into full bloom.

And this he certainly did, in the form of Shingon Buddhism, which has had an impact on almost every aspect of Japanese culture. 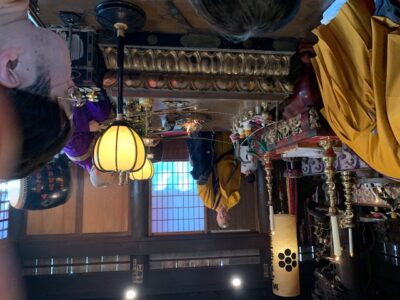 A Goma Taki ceremony at the Keiryu-ji Temple (KOSODATE KANNON) in Izumi, Tsukuba

This New Year’s Eve, if you are curious, patient, and impervious to the bitter cold, you can experience first-hand, one of the most important Tantric rituals brought to Japan by Kukai, the Homa fire ritual, or as it is known in Japan-Goma Taki (護摩焚き). There is no more impressive way to see how the cultural torch transported by Kukai continues to burn brightly.

The ritual will be performed, as it has been for centuries, at the Tofukuji Temple (東福寺) in Konda, Tsukuba.

Originally founded in 1249, this temple is worth a visit ANY TIME, for its graceful roof and interesting carvings. Inside the Main Hall you might be surprised to find that the entire ceiling is a large overhead Mandala, symbol of the Buddhist universe. Also, some people are excited to hear that the Jizo carving on the alter is said to have been carved by Prince Shotoku himself (hmmmm).

The best time to visit the temple, however, is the night of December 31st, when the priest and his wife get a bon-fire going outside the main hall for visitors to keep warm by before the ceremony begins. Amazake and snacks are usually offered as well. 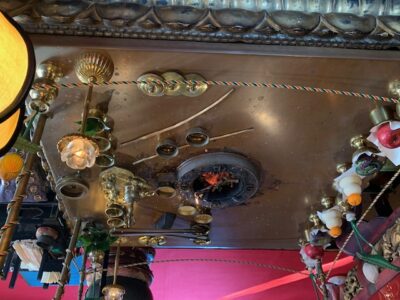 A closer look after the fire has gone out

As it gets closer to midnight, the handful of locals who show up start getting edgy from the cold and the excitement. When the priest opens the doors to the Hall, I would recommend grabbing a seat near one of the kerosene heaters because it ain’t much warmer inside, and the ceremony is about an hour long.

At the Tofukuji Temple, the rite is carried out as a New Year’s blessing and purification ceremony.

As the priest creates the fire using sundry mysterious ingredients including a variety of woods, seeds and grains, his sons chant and percuss for the shomyo incantations, which are worth coming out for in themselves.

When the fire is properly going the priest calls all visitors to burn their wish tablets (100yen) and then to apply the sacred smoke to any body parts that might need it.

When everything is over head back out to the bonfire for more amazake and treats. 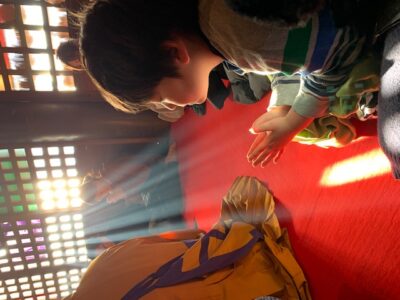 If you happen to be in Tsukuba on New Year’s Eve, this might be the place for you to cross over into the new year. Don’t forget to give a thought to Kukai and his impact on Japan.

Read more about the impact that Shingon Esoteric Buddhism has had on the the Tsukuba area – and on the Hindu roots of this sect – in Dr. Junichi Saga`s unique book: KANGITEN, which I have translated into English.