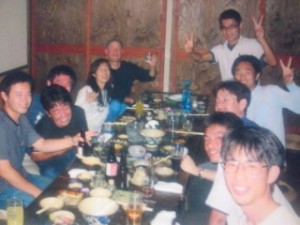 In Japan, there is a time of year when :

At night: the Japanese restaurants and IZAKAYA are fuller and more boisterous than usual , while outside taxis and DAIKO ( surrogate driver services) predominate on the roads.

And later into the night, you are SURE to find more than a few salary-men lying passed out somewhere, especially in entertainment districts, around train stations, or on the trains themselves!

Yes, it is December, and Japan`s BONENKAI ( Year-end Party) season has come rolling around again, lightening your wallets ( and heads), weighing down your tummies, and filling up your schedules. And except for those who want to diet or save money, in other words, those who attend out of obligation (GIRI)- there are lots of good times to be had.

As you might have guessed from the above, these parties, which might be held anytime in December ( and in recent years even in late November- when its cheaper!), always involve lots of eating and often ( especially for those held at night) the consumption of LARGE quantities of alcohol. They could be held at either lunchtime ( for housewives) or at night, at Western-style restaurants or much more frequently at IZAKAYA- Japanese-style restaurant pubs.

Since these parties are held by GROUPS, and the Japanese often consider themselves as belonging to several groups at once- company sections, clubs, hobby groups, teams or classes, family, a circle of old friends or even just a pair of friends, etc…, one person can often have a heavy load of BONENKAI at the end of the year.

For a foreigner living in Japan with a few hobbies, a job and some private English classes on the side, the party frequency can reach dangerous levels, sometimes with a string of days doubled up for lunch and dinner! Not very good for the liver or the cholesterol levels!

Since these parties ( especially the nocturnal ones), involve so much eating and drinking ( with the total cost usually being added up and split evenly among the members without regard to how much you actually ate or drank), you usually end up spending a lot of money. Seven thousand yen for one night is not unusual. New arrivals to Japan will often be shocked to find that they will have to pay ( and not be treated) for the BONENKAI of certain company English classes ( the companies might subsidize the classes, but not the parties!). Many foreigners trying to save up some money try to avoid these parties, but my advise would be, if you want to experience Japan to the fullest- go with the flow and shell out the dough!

Bonenkai （忘年会) literally means a Forget-the-Year-Party, and the Japanese dictionary explains that its intended function, as expressed in the name, is to help participants forget all the troubles and hardships of the past year.

Looking deeper at the expression BONENKAI, we can find, as we can with so many things Japanese, a Chinese source. The great Philosopher Chuang Tzu ( 369 BC-286BC), So-shi ( 荘子) in Japanese, advised his disciples to FORGET YOUR AGE ( forget the years), FORGET DISTINCTIONS (忘年忘義…）! Wise advice indeed, for those seeking the way!

So it seems that Bo-nen (忘年) might have originally meant to forget your age, as the Chinese character for year and age are the same. It is also interesting to note that traditionally in China and Japan EVERYONE celebrated their birthday at the New Year. Thus we can imagine the aristocrats and noblemen of ancient capitals of Nara and Heian-Kyo ( Kyoto) , emulating Chinese culture by forgetting their age at the end of the year, just before they aged another year, with plenty of wine, food and song.

Over the years, however, this original meaning has become completely lost, and though BONENKAI participants certainly DO forget a lot with all the drinking they do, these parties probably involve alot more reminiscing than active forgetting.

What Bonenkai do reflect, in my opinion, is the strong consciousness in Japan of making a clear spiritual distinction between calendar years ( as opposed to school years or fiscal years) . I am still surprised how in early January, Japanese would refer to two weeks earlier in late December as LAST YEAR etc. This expression, along with -NEXT YEAR- in English, usually connote a long time into the past or future, while in Japan the days before and after New Year Day are a year apart.

Anyway, what I want to say is that with each of their social CIRCLES, the Japanese like to make a clear symbolic ending for the new year, and will often meet again with the same friends for SHINENKAI- New Year Parties.

Another word you might want to remember is a NO-KAI ( 納会), which is a company`s or other organizations official end of the year party, at which a toast will be made by the boss saying- thanks for your efforts- OTSUKARESAMA DESHITA- and then all present will clap their hands in three rapid sets of three, And with that the year is officially closed.

I would like to go on and on like this about Japan`s unique year-end parties, but as you might guess I have a BONENKAI tonight and have to get ready!

To all readers of Tsukublog, a hearty Otsukaresama deshita !

and enjoy your BONENKAI!

This is truly a year that we would like to GET OVER WITH quickly……..