A Fine day For Fire-Walking at Mt Kabasan (加波山) ! Feeling the heat on the Winter Solstice Day ! 22 December, 2019 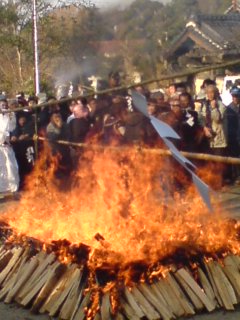 It is ironic that with Japan’s often gloomy summer rainy season, there is usually plenty more sunshine in mid-winter than there is in mid-summer. And so, though today, the To-Ji (冬至), or winter solstice was certainly the shortest day of the year, it was also one of the sweetest — with clear blue skies, no winds, and temperatures which were neither too hot nor too cold. In other words, a perfect day for fire-walking, which is what was going on today at Makabe’s Kabasan Jinja Shrine, just as it has been on every winter solstice day for more than five hundred years. 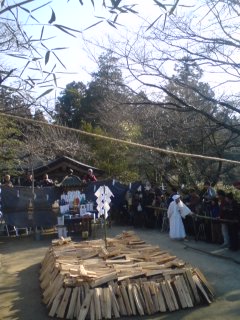 When I arrived at the shrine at noon, a dense and excited crowd had already gathered tightly round the area which had been marked off earlier in the day with sacred bamboo (imitake) and rope (shimenawa). Standing on tip-toes (I am not your stereotypical TALL gaijin) I could have a look at what was going on within the sacred space. At the far end, a portable shrine had been set up, with various offerings from the sea (umi no mono), from the fields (yama no mono), and plenty of O-Miki (ritual sake) neatly arranged on an altar which was also adorned with branches of sacred sakaki, which would attract the GODS to this spot. 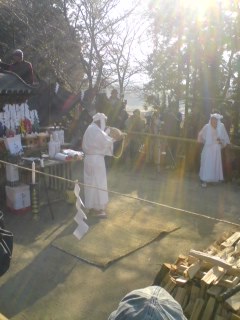 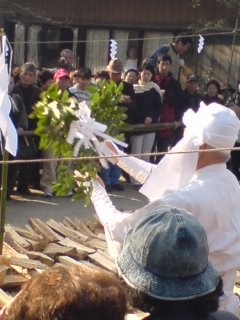 In the center of the cordoned off space was a neat pyre of chopped pine wood, with some ritual paper representing the deity of the shrine placed on top in the center. Five men, two of them younger, and three much older who were dressed in white robes and head-dresses more reminiscent of the Sahara or Arabia than China or Japan, were busy with various preparations. The oldest gentleman, who I later learned is in his mid-80s, was performing various purification rituals, consecutively waving sakaki, a sword, and blowing a conch (hora-gai).

Quickly tiring of standing on tip-toes, I set about exploring the precincts of this venerable shrine, which legend says was first founded by the semi-mythical barbarian subduer Yamato Takeru, who supposedly prayed at this site for victory in his campaigns of Eastern conquest. Today scores of parishioners clad in white HAPI coats and head-bands were busy chatting in the various shrine offices. Other visitors, from far and near, were buying votive tablets, tossing coins into the main offering box, taking pictures, or just waiting around impatiently for the ceremony to begin.

I was also able to chat with some of the shrine staff about the history of the shrine and the fire walking ceremony (Hi-Watari), which I will relay to you later. But now it was time to get into position for watching and photographing the ritual, and relying on plenty of pent up New York wile and CHUZTPAH I was able to manoeuvre myself into a favorable spot. 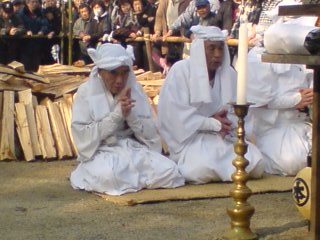 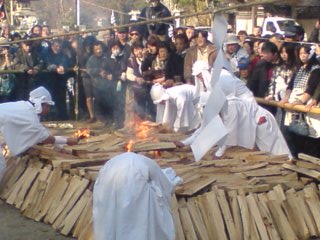 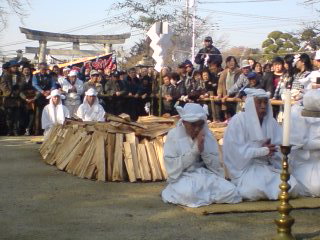 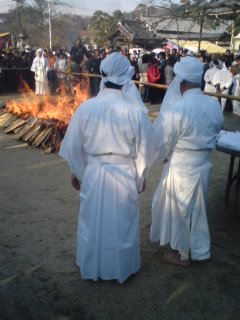 At this point, the old men in white were kneeling in front of the altar, muttering incantations with great concentration and solemnity. They then went ahead and lit the pyre, which on the windless day burned beautifully. The crowd watched the flames, as if intoxicated, for more than thirty minutes, as the old priests circled, chanting to themselves, and going through what looked like martial arts KATA (pattern practices), sometimes miming sword strikes which included strong KIAI (cries of EEII). They also would occasionally take colorful amulets from their belts and hold them up to the fire as they circled, looking as if they were seeking the fire’s weak points which they would  attack. 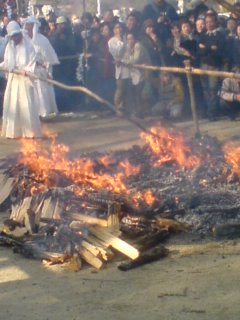 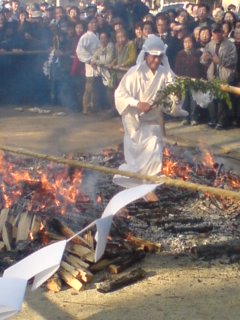 As the fire burned down, the younger men used long sticks to create a path down the center of the pyre. When this was ready, the oldest man drew his sword and performed another purification ritual. Building up his courage he let out a strong kiai as he passed through the center of the flames. He then stopped in front of the altar acknowledged the KAMI (Gods) and took a swig of O-Miki. He was quickly followed by the other white-men. 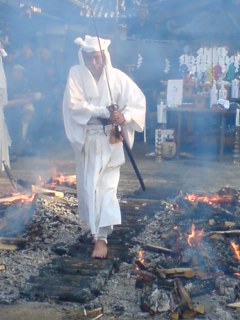 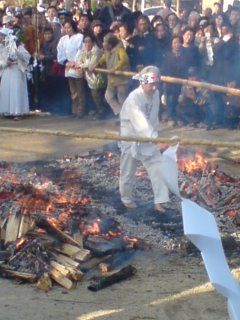 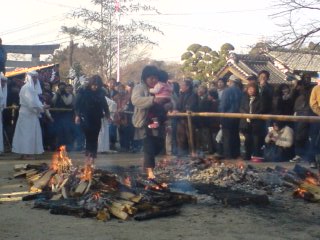 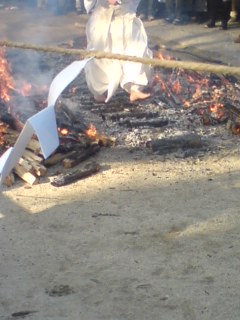 When they were finished, it was the parishioners’ turns. They all filed through the fire, and then on to the altar, as if drawn uncontrollably to the sacred SAKE. 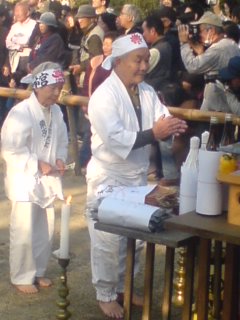 After leaving the sacred area these locals proceeded to the shrine office where they cleaned their feet, received a certificate of having participated and settled down for some beverages and snacks. After all the parishioners had passed through the flames, it was time for anyone else who wanted to to do so.

This took quite a long time, as all sorts of folks, young old, mothers carrying babies, passed through the fire.

When I asked those who had just passed through if their feet burned, they all seemed to agree that more than hot feet, it was their faces that felt the heat, from the flames on both sides.

When the last person FINALLY passed through, the old man called out – FINISHED. Then pandemonium broke out; as the crowd rushed into the sacred compound. 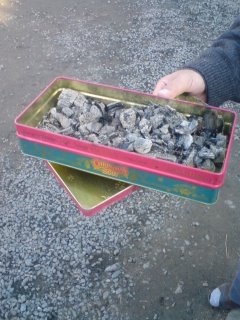 Many locals bring metal containers into which they put some burnt wood or embers from the fire. They then keep this in their houses for one year as protection from colds. The mad scramble for these red hot pieces of wood seemed very dangerous, but luckily no one seemed to have gotten burned.

The Mt. Kaba Shrine Fire Walking Ritual had come to an end, and everyone seemed very satisfied indeed. 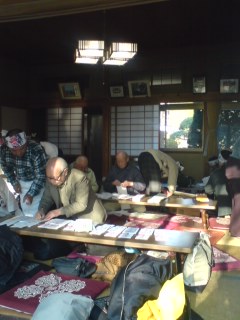 In the shrine office

In 1394, the abbot of the Enryaku-Ji temple, which protects Kyoto from the unlucky North-Eastern direction and is probably Japan’s most influential temple, travelled the country making pilgrimages to its sacred sites. One place he and his entourage of monks visited was Mt Kaba, which was supposed to have once been used for sacred rites. This priest, Genkai-Shonin (源海上人), carried out various esoteric rituals which were part of the Tendai Sect and had been brought to Japan from India and perhaps Persia, by way of China where the sect’s founder Saicho had come into contact with them. It is from these ancient practices that the current Mt Kaba Shrine’s Fire Walking Ritual have evolved, and that is why they have such an exotic air. Please keep in mind that until the Meiji Period (1868-1912) Buddhism and what is now called Shinto (native religious practice) were often combined in a syncretic form of worship.

The fire walking ritual is believed not only to cleanse all those who undergo it of one year’s worth of impurities, but also helps to invigorate the sun, which until the day after the solstice gradually becomes weaker and weaker in the sky.

I myself almost took off my shoes and passed through the flames. I was seriously contemplating it… but I got cold feet. 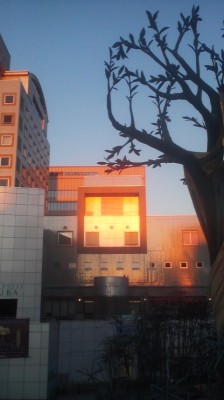 And back in Tsukuba: Once a year, on the day of the winter solstice, just before sunset, the “Sun-box” at the Tsukuba Center Complex lights up like this. The past few years have been a bit cloudy- but this year I was able to take this photo- Thanks to Dan for telling me about- another of Tsukuba`s curiosities!