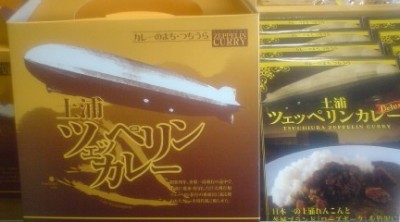 One of Tsuchiura City`s typical souvenirs- Zeppelin Curry – commemorating the arrival  of a German airship to the old Tsuchiura Naval Aviation Base on August 19th 1929. Curry rice, one of Japan`s most popular dishes was especially important to the Japanese Navy which to this day, serves it on its ships every Friday (as did the British Navy). 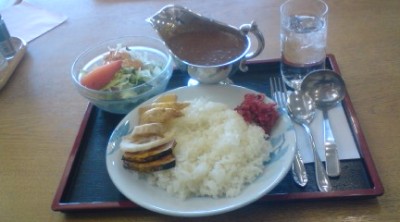 I have never forgotten this- my first ever Zeppelin Curry- at the old hotel in Suigo Park which had to be demolished after the big earthquake of 2011.

After having arrived in Japan many years ago as a student, I soon learned that so much of what I had IMAGINED Japan to be like- was mistaken.

One thing that particularly surprised me was the popularity- the IMPORTANCE- of curry in Japanese food culture.

Like many others, I had long been under the impression that in Japan people almost always ate SUSHI, or at least some of the other traditional Japanese dishes I had read about or tasted at some of the cheaper Japanese restaurants which we had back then in New York City,

I had never thought that a dish I had always associated with INDIA would be one of, or perhaps THE most  popular dish in Japanese home-cooking, what the Japanese often think of when remembering the food their mother`s made for them- and the food they had at school, as well.

But that is what Japanese curry rice is- one of Japan`s KOKUMIN SHOKU (国民食)- Foods of the People (the other of these being another foreign derived dish- RAMEN). Served in countless variations, but usually containing what are know as the THREE PILLARS of CURRY RICE: potatoes, carrots, and leeks (negi), the CURRY itself, which is served over rice, is much thicker ( more like beef stew gravy) than its Indian counterpart- and usually not as spicy.

In fact, it is said that when Indians are given a taste of Japanese curry rice they react by saying: ” This is delicious ! What is it ” ?

(There are, of course, AUTHENTIC Indian restaurants which have in fact been increasing with the popularity of ethnic food (which Japanese curry is not considered to be- it is considered YO-SHOKU- 洋食- European food ! ). In fact, just after the completion of the TX Line connecting Tokyo and Tsukuba in 2005, 18 new Indian restaurant (run by expatriots from the subcontinent) opened within the Tsukuba City limits- many are still in business, and a few are thriving.) 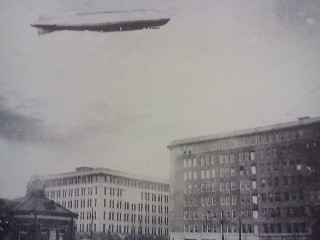 Ten years ago, as part of its efforts to revive the local economy and culture (and it sure does need plenty of revitalization ! ) the city of Tsuchiura (Tsukuba`s neighbor to the east) has started holding a major curry rice event in which dozens of the country`s greatest curry chefs battle it out in a competition to make the year`s most exciting curry. There are also numerous stands set up at which visitors (and there are lots of them in this food loving country) can sample different curries and other famous dishes (so-called B-Grade Gourmet dishes) such as Fuji no Miya Yaki Soba (fried noodles) and Yamagata Imo Ni (tasty boiled potatoes!) and Furano Omelletes and rice.

Adding to the excitement, there will also be an airshow featuring small propellor planes (see utube link below). 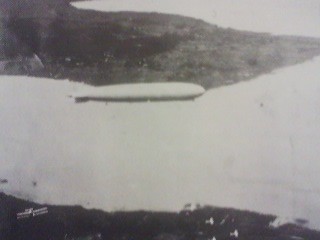 The Zeppelin as it flies over Lake Kasumigaura (August 1929)- people thronged to the Tsuchiura Naval Aviation Base to welcome the crew – who a meal of the local CURRY RICE when after they had landed.

The Connection Between Curry Rice, airshows, and Tsuchiura City

Choosing to have a curry festival with an airshow in Tsuchiura was not a random act- and the connections between these seemingly incongruous entities are significant.

Curry, as the Japanese eat it- with the sauce thickened with flour, was actually introduced to Japan by the British- in great part by the Royal Navy.

(Though the Anglicized curry (thickened with flour) had been avaliable in certain restaurants and hotels in Osaka and Tokyo, it was in the Imperial Army and Navy that the general (male) population developed a taste for this delicious, nutritious, and easy to make dish. Many enlisted men, after being discharged, went back to their hometowns and taught their wives and mothers how to prepare it.).

To help sailors keep a sense of calendral time while at sea for months, the British Navy served curry- a variation of the food served in its most important colony – on its ships every Friday. The Japanese Imperial Navy adopted the practice.

And while the most important Japanese naval base was in Yokosuka, south of Tokyo, in Kanagawa Prefecture was where this Navy Curry (KAIGUN KAREH) was first introduced, Tsuchiura City became home to a Naval Aviation Base and a Naval Flight School- at which the training for the attack on Pearl Harbour actually took place (though these were both actually located in what is now Ami Town). That means that for decades there was a large population of curry eaters (and lovers).

That history gives Tsuchiura an obvious connection with curry. And because of its history of Naval Aviation it is understandable why there would be an air-show.

The only problem is this. Since Japan`s defeat in the Second World War and the subsequent adopting of the “Peace” Constitiution, Tsuchiura CANNOT harp on its military past as a sense of pride. That is why the navy is hardly mentioned in connection with the curry festival or the air-show that was held last weekend.

Instead, what is emphasized is something which took place in the summer of 1929- one of the great events of Tsuchiura history- certainly its greatest spectacle: the arrival of the German Zeppelin air-ship as one stop on its spectacular round the world voyage (interestingly, the hanger at which the Zeppelin was sheltered during its stay in Tsuchiura (actually Ami) was built with war reparation money paid to Japan by Germany ( in the First World War Japan fought on the side of the Allies).

The organizers of the event are promoting the story that when the Zeppelin landed, its crew was fed a festive meal of curry rice made with local ingredients- and thus we have the Curry Festival, and Tsuchiura`s most famous “souvenir”- packets of Zeppelin Curry. 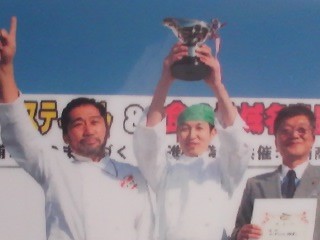 Get an idea of what last weeks airshow was like from this utube clip:

Here is a map showing the location of the Kawaguchi Undo Koen Park:

Besides driving (parking could be a problem), you could walk to the park from Tsuchiura Station- which you can get to from Tsukuba by bus

If you do plan on going to this event (and it should be good) I would strongly recommend skipping breakfast- you definitely want to have plenty of room in your stomach in order to sample all the amazing curries they will be serving! 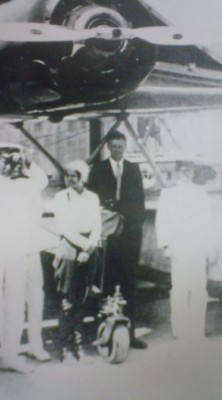 Another famous stopover in Tsuchiura on a round-the-world air voyage: Charles Lindberg and his wife.

As I have already told you, curry and rice was being served at select restaurants and hotels in Tokyo and Osaka even back at the end of the 19th century. The Imperial Army and Navy put the common-man in regular contact with the dish, and many developed a taste for it.

In the years building up to the Second World War, Japan`s Curry rice culture suffered a serious setback- something of a Dark Age for Japan`s curry fans.

Access to the raw materials, mainly the various spices which had to be imported from India or Indonesia became extremely limited- and subsequently preparing curry rice become a prohibitively expensive or impossible undertaking.

During the war years and the extreme suppression of the use of the Enemy Tongue- English, the word curry (KAREH) was even banned.

It was only after the war, in the 1950`s with Japan`s return to normalcy, easy access to spices, and most importantly- the development by several food companies of easy to make packets of curry roue which were promoted aggressively with the help of new advertising media- television. All Japanese of a certain age look back with nostalgia on the old curry and rice ads from the 60`s and 70`s. One of the most memorable is actually featured on the poster for the Tsuchiura Curry Festival- in the top right corner. There is a caricature of an Indian with copy that reads (INDOJIN MO BIKKURI SURU)- Even Indians will be surprised!

But when answering the question of why curry rice became so popular in Japan, the best answer might be the simplest- its cheap, easy to make, nutritious- with vegetables, meat, rice and spices, and of course, delicious in its many many manifestations. 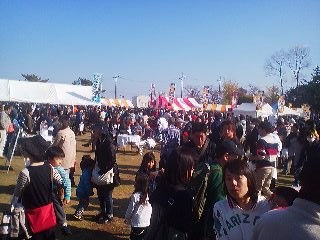 The Curry Festival in past years has featured warm air, clear skies aaaaand LONG LINES. It was easier to get any food other than curry. 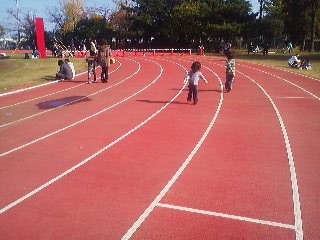 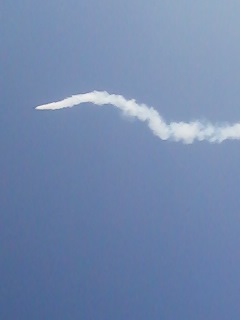 The single propellor plane which performed a dazzling air-show drawing crazy patterns in the sky. The sound and maneuvers evoked images of Zero Fighters in combat 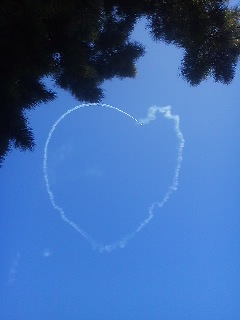 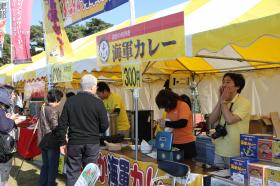 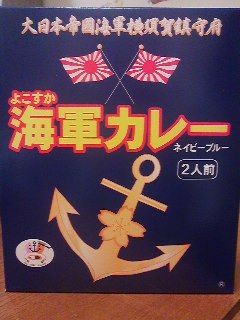 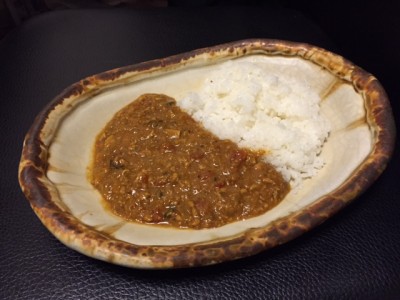 The other day, the door-bell rang – and when I opened the front door I got a special surprise – a batch of Mamoru Shimizu`s curry with a Japanese twist – a sublimely tasty konbu dashi base! 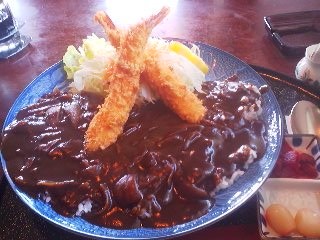 For those who can`t or don`t care to make it to Tsuchiura this weekend (or ever!) here are my tow favorite Japanese-style curries in Tsukuba. This one is served at the New Takane Restaurant in Oda, Tsukuba- and costs a hefty 1,400 Yen