In November Shichi-Go-San Celebrations are held Throughout Japan- and but they are especially extravagant in our very own Ibaraki Prefecture! A deeper look! 5 November, 2019 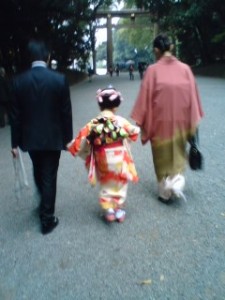 One of the questions most frequently asked  by Japanese people you meet for the first time is- HOW OLD ARE YOU?  This can  be a little disconcerting for you once you get beyond a certain age, but don`t let it make you paranoid- its not that you look SO OLD or SO YOUNG- its just that in Japanese culture being aware of others` ages is extremely important. You could even say that in Japan there is a CULT OF AGE.  By this I do not mean one of youth or old age ( though youth IS highly regarded in itself). What I mean is that in Japanese culture, one`s age, no matter what it my be, bears with it great significance.

The foremost reason for being aware of anothers age for the Japanese is to determine who is senior and who is junior, since in this Confucian influenced society this  might affect the character of the relationship formed and the form of speech which will be used . 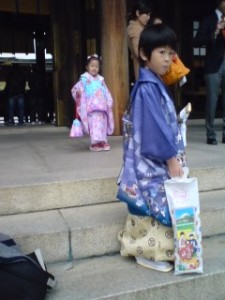 Besides this, in Japanese culture, certain ages represent certain MILESTONES or TURNING POINTS in one`s life. These include the many UNLUCKY AGES ( yakudoshi, 厄年), the main ones being ages 42 for men and 33 for women. (interestingly these age related events are mirrored almost perfectly for The dead, with memorial services on the 1st ,3rd, 7th, 13th 33rd etc.- year anniversaries)

Most of these special ages, however, beginning with a baby`s official naming on the 7th day after birth, are happy occassions culminating in the  special longevity celebrations at 60, 70, 77,80,88,90,99 and 100.

Since it is now November, today I will discuss one of Japan`s most popular, and probably, with its minions of adorable kimono-clad-kids escorted  to atmospheric shrines by beaming parents and grandparents- its most photo-friendly rite of passage event- SHICHI-GO-SAN ( 七五三), literally the 3-5-7 celebration.

Today, this event is typically celebrated by families with 3 year old or seven year old girls and five year old boys. These families buy or rent FESTIVE WEAR ( HARE-GI- 晴れ着), traditionally meaning Japanese style kimono (though you will often find boys in suits), going to the photographers studio for commemorative portraits ( often in different styles of dress) and then visiting a shrine to pray for the child`s growth and health. The child will also usually carry a bag of special candy called CHITOSE AME ( 千歳飴- thousand year candy), beautifully decorated with symbols of long life- cranes, turtles, pine, bamboo and plum as well as auspcious chinese characters.

Optimally this should take place on the 15th of November, though anytime in November is appropriate ( however, I HAVE heard that before the 15th is better than after).

In Ibaraki Prefecture ( yes, it seems that it is true ONLY here), the event is often celebrated with much more extravagance- especially by families from traditional hamlets. After, visiting the shrine, relatives and friends are invited for a reception at a restaurant or even a fancy hotel. Emcees and photographers are invited, speeches are made. Gifts of money are presented to the child. It is not very different from a wedding.

I have even heard that when children celebrate a shichi-go-san, their family changes the tatamis and shoji doors ( which is also a custom for weddings). 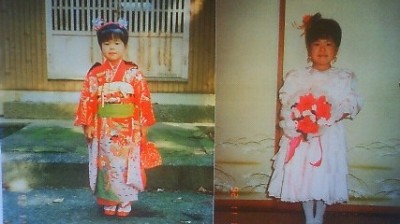 All dressed up for their special day! Asako Seo`s daughters celebrated their Shichi-Go-San first by going to their local Kashima Jinja Shrine and then they had a reception for close relatives- about 29 years ago 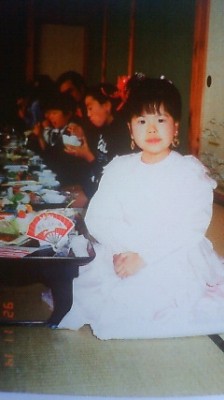 Now just what is the origin of these customs? Well,  as is the rule with Japanese culture, the sources are diverse and the evolution intriguing.

As I have often mentioned (in previous articles) in relation to Japanese festivals, ODD NUMBERS are considered auspicious ( this concept was introduced in the 6th century from China). Thus, the Doll Festival is on March 3rd ( 3/3), Childrens Day May 5th (5/5), Tanabata July 7th ( 7/7), etc.

It is thus understandable why the aristocrats of the Heian Period ( and subsequent generations of Japanese)would hold rite of passage ceremonies for their children on ODD NUMBERED years.

Another important concept behind the 7-5-3 ceremony is the fact that the Japanese did not consider children to be full members of the community until they were seven years old. By this I  mean that children were not registered as part of the population ( in the NINBETSU-CHO), until they were seven. Those who died before that age were not given the usual funeral or buried in their family graves.

Thus, attaining the age of 7 signified becoming a member of the community and of becoming a  full-fledged PERSON.

Still, in the years from the Heian Period (794-1185) to the end of the Edo Period (1600-1868), there was no standardized SHICHI-GO-SAN, as we know it today. The noble and samurai families DID have special ceremonies for 3 year old children ( KAMI-OKI) after which their hair was allowed to grow out instead of being shaved. Five year old boys had a ceremony for wearing their first HAKAMA ( special trousers) called HAKAMA-GI. And then for seven year old girls there was the ceremony for tying their first OBI sash, called the Obi-toki.

These ceremonies DID NOT necessarily take place specifically in November.

As I have written many times before, the Japanese populace always admired the higher classes and aspired to their ways. Thus, during the Edo period and the growth of a prosperous and thriving merchant culture, these customs were taken on by the townspeople and farmers as shrines , kimono makers , and sweets makers all promoted this event. It was a huge hit and had a huge commercial impact, hinting at things to come with Valentines Day and Christmas in contemporary Japan.

Just why Shichi-Go-San came to be celebrated in November, and especially on November 15th, remains unclear. Some say that this was the celebration day of one of the children of the Tokugawa Family ( which ruled during the Edo Period). Another explanation for the celebration being on the 15th, which when I first heard it put a smile on my face, is that 3, 5 and 7, added up make 15!

Anyway, being just after harvest season, it is a perfect time for rural Japanese to celebrate their childrens growth and health in style.

I have also written about Japan`s traditional longevity celebrations ( choju no iwai, 長寿の祝い). You can see the article here:

The Tori no Ichi (酉の市) Rooster fairs, which are held in and around the precincts of shrines dedicated to the mythical warrior Yamato no Takeru (日本武尊)- usually called O-washi Jinja or O-tori Jinja on this month`s DAYS OF THE ROOSTER (the next one will be on November the 17th  2015 – and then once more on the 29th) are colorful, exciting, photogenic, and CROWDED places to visit. They are a good way to experience the spirit and energy of old Edo, as it was customary, since at least the early 19th century, for the merchants, as well as the women of the Yoshiwara pleasure quarter, to flock to these markets to buy lucky ornaments- most famously, the decorative rakes called Kuma de (熊手), which symbolize making money, or moe aptly put- RAKING IT IN.

And as usual, I would like to recommend going to Meiji Shrine in November. I have written about why in my previous post.