Riding the Tsukuba Express (TX) on a weekday- a True Story 1 October, 2019

Despite the refreshingly cool and fragrant autumn air, so welcome after the long months of relentless and stultifying heat, I was exhausted. And though the ride back to Tsukuba would take less than an hour, I was in no mood to be standing for most of the way. I dont know what was wrong with me, but for the past few weeks I just hadnt been feeling that old power and stamina, that old ZIP that I had always taken for granted. So now while all around me were the lights and hustle-bustle of one of the world`s most vibrant cities, my own body seemed to move as if slogging through a bog . All the neon illumination and frenetic human and mechanical movement only had me seeing things in a blur.

It had been quite a while since I had been to Tokyo on a weekday, so when I got to the station at Akihabara and ran into the  rush-hour crowds I got a bit irritated and even a bit claustrophobic as I jockeyed myself into position in front of the ticket vending machines.When I finally slipped my way up to one, I had difficulty getting enough change out of my sweaty, overstuffed pants pocket, and clumsilly fumbled some of the coins that I was able to claw out. Getting my ticket and passing through the turnstiles I summoned up my last bits of strength and propelled myself down the escalators, which seemed to me endlessly deep at that moment,( like the Moscow or St. Petersberg subway stations which were built to double as air-raid shelters) hoping to get myself a seat on the train.

Finally reaching the platform level, I instinctively headed for the front car, having always believed that  part of the train to be  the least crowded. Also, as someone who takes a keen interest in Japanese culture, I have always tended to ride in the front car, standing up looking out ahead as the train drove on and enjoying the drivers POINTING and CALLING- the unique gestures and cries ( quite amusing to the foreign eye) which have helped keep Japanese public transportation and factories so accident free.

Much to my relief, the doors to the train were already standing open and I COULD easilly get a seat in the first car. WHEW. It was great to get a load of my feet, and the backpack full of books which I always lug around, off my back. When I settled onto the bench, I leaned back and noticed a poster hanging across from me promoting Mt Tsukuba as a POWER SPOT ( a place at which one could take in positive KI energy!?), and I thought to myself that I had better try to get to that mountain sometime, instead of just admiring it at a distance from my stairwell window. I was definitely in need of some recharging.

Letting all my muscles relax and taking in a deep breath,I brought my line of sight back down to eye level. I noticed something. Every other passenger in the sparsely settled car besides me was a WOMAN. ” Hey! This is not bad at all “, I thought to myself. Especially compared to some  of the hellacious rides that I remembered on last-trains back to Tsuchiura in the days before the TX, on the Joban Line, jam-packed with inebriated salary-men.

Trying to remain unfazed and under control, I reached down into my book bag and pulled out some reading material. I have to admit, though that while I was staring at the pages I could not concentrate on the what was printed on them.  Instead I found that I was trying to pose myself , and starting to make those silly faces one makes when trying to look cool while looking in the mirror. This is because I realized, much to my consternation, that most of the women in the car, were unmistakably LOOKING AT ME- in other words: giving me the eye. It had been a long time indeed since anyone had CHECKED ME OUT, and I was thinking-” Hey! For some reason I must have gotten back the ol` charm for tonight! The ol` magic!”

I tried to remain cool and keep my eyes in my book,but I couldnt resist glancing around at all the women who it seemed could not help but glance over at me. This was gonna be a sweet ride home.

Just as I started to scour my mind for some of the old lines I used to know which were always good for breaking the ice and opening up a conversation, my heart almost stopped! One of the women sitting across from me had tentatively gotten up and had started moving towards me- maybe to introduce herself- Avi! Get a hold of yourself , I thought! Keep your cool!

The woman looked at me nervously, and seemed as if she wanted to communicate with me but not knowing whether I spoke Japanese or not, was searching for just the right English words to introduce herself. It seemed she couldnt think of what to say, and she finally resorted to a gesture.  She  pointed at a sign on the wall. It was pink and had Japanese and English writing on it.

It read:  WOMEN ONLY

and then in very small print: On weekdays first car heading (to) Tsukuba for women only from 6:34 PM until the last train

The blood rushed warmly to my face. I swept up bag, and mind a blank, slipped out of the women-only compartment, head down,muttering a few SUMIMASENS ( excuse me), propelled more by the hot air being let out of my quicky deflating ego than by muscular force. The next thing i knew I was standing in the next car. Naturally, there were no seats open there. But somehow I didnt feel so weak anymore anyway. I  held onto one of the cold, metal poles  to keep my balance and dazedly stared up at the electronic information board. I watched as the little round lights which represent the stations along the line, lit up, one after the other, after the other- as we hurled forward towards the last stop. 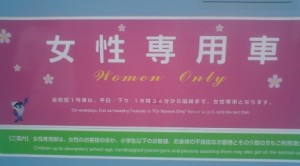