Kaki (persimmon) is the Color (and Flavor) of Deepening Autumn in Rural Japan 29 October, 2019 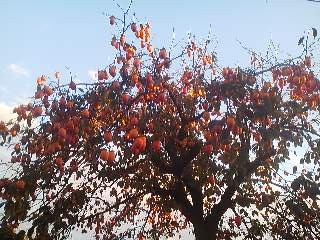 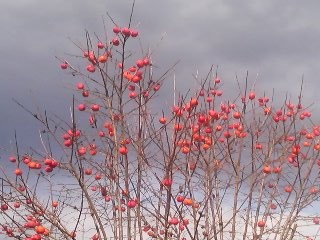 KAKI on a tree in Saiki, Tsukuba 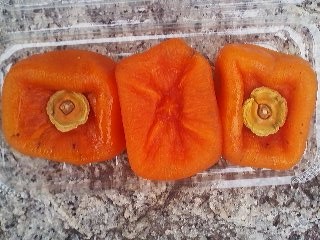 Dried persimmons (HOSHI GAKI) purchased at a Tsukuba supermarket in November. Despite their name, they are soft and quite wet. Interestingly Japanese people will often say that men do not like these extremely sweet treats

Autumn foliage comes late to Tsukuba. It is already early-November, and the ginkgo trees (itchoh) have just begun to turn yellow. It has been a few weeks, though, that we have been able to enjoy what is probably the most representative color of autumn in the Japanese countryside – the reddish-orange glow of kaki (柿), persimmons, which seem to grow in the gardens of almost every home in the old neighborhoods of Tsukuba. 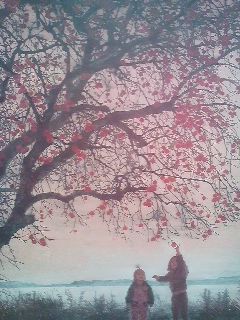 Already in late September these warmly hued fruits can be seen hidden among the still verdant leaves of their trees, but by now with most of the foliage gone, the kaki hang heavily on the bare branches, like so many little Halloween ornaments (they could be mistaken from afar for tiny pumpkins). With light conditions just right, they can be absolutely breathtaking. In all the years I’ve been trying, I have never quite been able to adequately capture their special beauty on film. 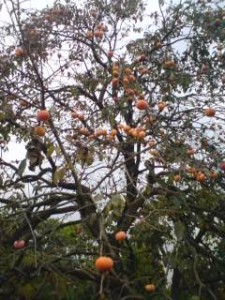 Though it is possible that some species of persimmon are native to Japan, it is commonly believed that these fruit were introduced to this country from China, probably via the Korean Peninsula sometime during the Heian Period (794-1185). There are legends of how a Buddhist monk wandered Japan on foot, subsisting mostly on the light-weight and nutritious dried persimmons he was carrying, spreading the seeds to every village he passed through ( a  Japanese Johnny Appleseed ! ). These legends also stress how people were impressed by the persimmons curative (anti-bacterial) powers. 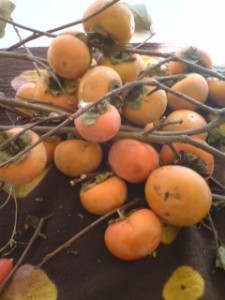 Whatever the truth is, the persimmon did in fact spread throughout the land, with more varieties now in Japan than in any other country in the world. It has become an essential part of Japanese culture (in several ways).

As I have said, there are numerous varieties of persimmon in Japan. However, it is important to know that there are two basic types. First there are sweet persimmons (amagaki,甘柿) which can be eaten right off the tree (when ripe), and are sold fresh at stores (in season). Then there are astringent persimmons (shibugaki, 渋柿)), which cannot be eaten raw (they taste chalky!), but can be made edible (and sweet) by drying, heating, or soaking in a little alcohol. These shibugaki are often longer from top to bottom, while amagaki are flatter and wider (though this is not always true!)

If you have any friends who are locals, you are almost certain to get a gift of homegrown kaki. Your friends will probably tell you how sweet they are. If you try one and it is inedible, you can put a dash of alcohol (shochu, for example) on it (and the rest of the batch) and close it up in a plastic bag. By the next day they should be delish. Soaking them in your hot bath will also do the trick.

Since heat is a factor in making them sweet, global warming has been changing the nature of Tsukuba’s kaki culture. Until about 40 years ago, I have heard that shibugaki could be seen drying in the sun from almost every house in Tsukuba. Now, since local trees are producing sweeter and sweeter fruit, it is no longer necessary to dry them for eating. In more northern or mountainous parts of Japan persimmons strung up in the sun are a common sight, harking back to the days when dried persimmons were one of the most important sources of nutrition for farmers, and just about the only sweets their kids ever tasted.

Over the centuries the Japanese found many ways to use persimmons and the Edo Period (1600-1867) could be said to be the Golden Age of Kaki. During this period the fruit was an important ingredient for many dishes which no longer appear on menus or in peoples’ homes. And as I have mentioned above, it was a staple food for the masses. Fresh off the tree, dried or slightly roasted. The leaves were (and still sometimes are) used for tempura, and the caps (boiled with ginger) a cure for hiccups.

Before the development of plastics, the tannins removed from persimmons were used to create a water-proof coating for a variety objects (umbrellas for one!)

In this area I have heard it said that pregnant women and new mothers should not eat persimmons- as they chill the body, and all old people remember being told that if they fell out of a persimmon tree they would soon die (this was a way of keeping kids from climbing the tree, whose branches are in fact easily broken).

And of course, all Japanese, when asked about kaki, remember the poem by Masaoka Shiki (because it is in all school textbooks) which goes:

Munching on a kaki, Horyu-Ji Temple’s bell resounds (my translation).

There are numerous other poems and proverbs related to kaki which I would also like to mention, but maybe I will leave them for next year.

Enjoy your kaki, sweet or astringent! 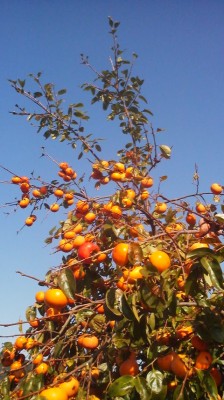 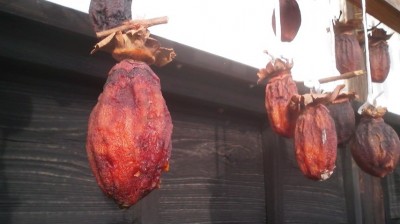 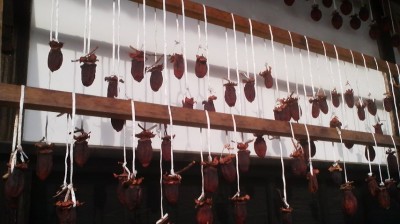 Persimmons hanging to dry at the gate of Sakura Azumao`s birth house in Yasato, Ishioka 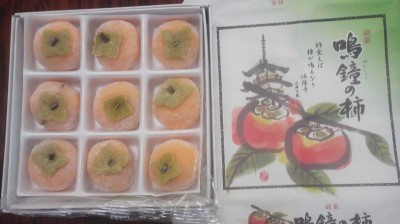 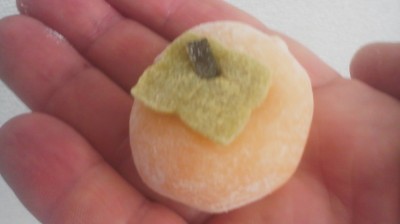 A closer look ( before I consumed it !)