In Japan`s PEANUT COUNTRY ( parts of Chiba and Ibaraki Prefefectures), you can discover the delights of Fresh, Raw RAKASEI (peanuts) boiled with salt- tasting like the BEANS they really are! 6 October, 2019 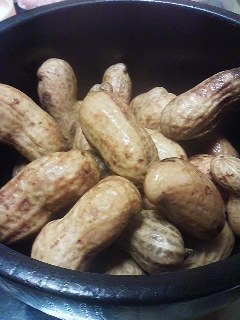 What is the most delicious way of enjoying peanuts? Freshly harvested and boiled in their shells with salt: Fresh raw peanuts are available in the tsukuba area from September through November

Nearly 90 percent of all Japan`s peanuts are grown in the two prefectures just to the north and east of Tokyo- namely Chiba (74%) and Ibaraki (13%). And though this crop had not been introduced to the area until 1876, it has become an important part not only of the regional economy, but also of the regional CULTURE: in these prefectures many throw peanuts instead of soy beans on the day of February`s SETSUBUN Bean Thowing Festival, and more strikingly- peanuts in this area can be served as the MAIN PART of a meal- the OKAZU (topping for the rice)- instead of meat or fish, in a dish called Misopi.

(interestingly peanut oil is NOT commonly used in this area, as just as in this the rest of Japan, people here prefer to use  sesame oil)

So I guess you could call this part of Japan its PEANUT COUNTRY. And since I grew up in the United States loving peanuts and eating lots of them, living here in Ibaraki Prefecture suited me just fine.

The great variety of peanut snacks- there are some specialty shops in the Tsukuba area (in Ushiku City to be specific) which sell dozens of different delicious products, – and the misopi (peanuts in miso) itself, have kept me happy (and kept my waistline continuously expanding!) for as long as I`ve been here.

I have written about  MISOPI in a previous post (link provided below) and posted the essay and some pictures on TsukuBlog. 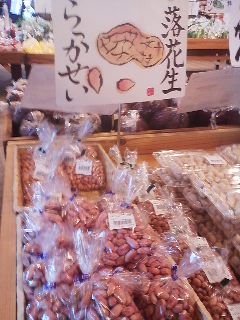 Apparently one of my students had read that article. A few days after it had been posted, one fine October day, she was waiting for me outside my classroom holding a medium-sized cardboard box.

” I recieved these from my friend in Chiba Prefecture “, she said, handing over the box. Having no idea what could be inside, I opened it. It happened to be that my student was blocking the light, and there was a shadow was cast over the  now opened container. Before I could see anything, I could smell it- the rich aroma of soil- the GOOD EARTH !

My eyes adjusted to the light- peanuts ! ” Yipee”, I thought.

I dug my hand inside. The peanuts were cold, damp, and dirty. They were also very LARGE.

” You can`t eat these like this”. my student explained. ” They are raw. You will have to boil them with some salt. I think you will enjoy these peanuts even more than MISOPI ” !

When I asked how long I would have to boil them for, she replied: ” About an hour ” 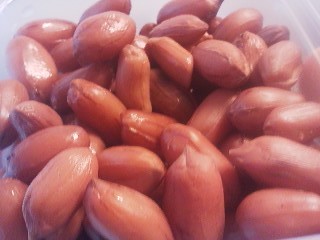 Boiled  shelled peanuts- almost as good as those boiled in the shell. You have to eat them quickly, though, as they will spoil in a couple of days- even if refrigerated.

Boiling peanuts for that long seemed quite troublesome (for a person as impatient as myself) and to tell the truth, I doubted at that moment that I would do it.

But I did- and it was an eye opening ( and highly caloric) experience. In fact, I can even say that it was the first time that I had come to know peanuts for what they really were: BEANS !

While all peanuts I had ever had up until that evening seemed more similar to pecans, cashews, macadamias or other tree growing nuts than to its true  relative- the soybean ( like most most English speakers, I mistakenly assumed that peanuts were nuts- because of its name and its inclusion in any packet of assorted nuts peanuts are BEANS), these soft hot deeply flavorful peanuts were more like EDAMAME (the green soy beans Japanese people eat boiled and salted).

More than any other type of peanuts I had ever had, these were the most difficult to STOP EATING ( which is not good news for the weight conscious, since a high percentage of  each peanut is oil!).

And it goes without saying, that after that experience, I became an addict- a veritable boiled peanut nut.

Luckily, they are not available all year-round, The window of opportunity for the most delicious raw peanuts IN THE SHELL is very narrow- from September through mid October.

But after that, you can still get raw SHELLED peanuts at certain stores in the Tsukuba area through November. These are almost as good. 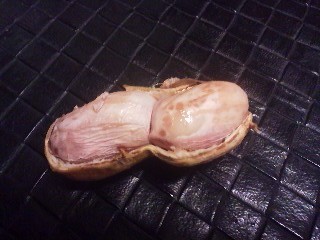 A freshly boiled peanut in its shell Eating peanuts like this reminds one that peanuts are BEANS, not nuts.

So now, each September. I join the local legions of peanut lovers who REJOICE when the first fresh raw unshelled peanuts hit the market. They are available at JA (Japan Agriculture) outlets, and at other green grocers in Tsukuba and the surrounding area.

I even have these shops call local farmers to reserve my peanuts so as to make sure I get them! 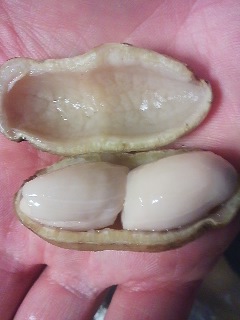 Another way to guarantee your supply of raw peanuts is to grow them yourself- since the climate of this area is obviously quite good for it.

Not only will you get your beans (if you do a good job), but you will also learn a lot about this very interesting, even AMAZING plant.

The most surprising thing about the peanut plant for me was finding out that the part we eat – the bean – grew UNDERGROUND ! This fact probably took me aback because I always associated them with tree growing walnuts and almonds (as well as all other nuts).

But what happens with the peanut plant is this- it sprouts leaves from its slender stem and then blossoms with yellow flowers (in July in this area). 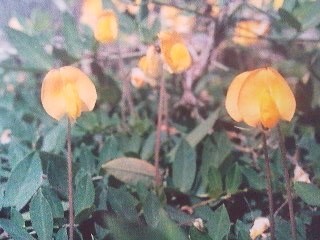 The flowers of a wild variety of peanut. These flowers wither, drop down and bthen bore in the ground eventually turning into the peanut beans

These flowers then start to wither and the stalks to which they are attached begin to lower the flowers down to the ground and then bury into the earth! It is then that the peanut bean and its shell begin to form!

PEANUTS IN JAPAN- a history

Peanuts originally evolved (as far as we know) in South America, at the foot of the Andes Mountains where there are still many wild varieties.

The pre-columbian natives of that area used peanuts as both a food and medicine and the plant came to be propagated through Central America and Mexico.

Spanish and Portuguese traders where probably very pleased to come across these beans in the 16th Century as they took control over (and ravaged) Central and South America. Peanuts were a very useful commodity for them- as they were very nutritious and could be stored (when dried) for long periods of time. (A dark episode in the peanuts history was its use a staple food on slave ships).

The cultivation of the peanut as an important crop soon spread to counties around the globe.

They were first brought to Japan in the year 1706- but they did not catch on here until more than 150 years later.

They did,however, soon become an important crop in the Ryukyu Islands (Okinawa) where they were called JIMAMI  ( ground beans) and were used to make peanut tofu (Ji-mami dofu).

It was only after the Meiji Restoration of 1868, in the year 1872 to be exact, that a man who had received peanut seeds in China, began cultivation in what is now Kanagawa Prefecture (just south of Tokyo), and then in 1876 the pracitce was taken up in Chiba and then Ibaraki- and the rest is history.

WHAT TO CALL PEANUTS IN JAPANESE

While peanuts found in chocolate, cookies, cakes and other snacks (including packs of mixed nuts are simple called PEE NATSU in Japanese (and most of these imported from China), the peanuts which are eaten as a vegetable (or as a dry roasted nut in a shell) are usually referred to as RAKKASEI (RAH KAH SAY) whose three characters mean: flower dropping life-form- a testimony to the way the peanuts grow.

Even though it is already mid-October, you will still be able to find raw RAKKASEI at JA outlets and other fine green grocers in Tsukuba (you might even be able to find some IN THE SHELL if you are lucky).

Boil them for about 50 minutes with 20-30 grams of salt per liter of water.

Here is my post about MISOPI, which is available at all Tsukuba supermarkets throughout the year: