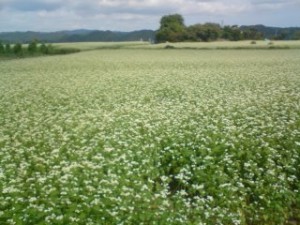 “Snow”,  I thought in amazement, as still half-asleep and bleary eyed, I gazed out the window of the farmhouse in Ibararaki Prefecture`s hilly North-West to which I had arrived late the night before. Squinting with disbelief ( it was already late September), my eyes slowly began to find their focus, and my mind snapped into  a slightly higher state of alertness. I then realized that the WHITE  which stretched out before me was not an extremely early winterscape, but a carpet of flowers, rolling with the wind, all the way to the horizon. It was the prefectures now highly regarded ( ranked no.1 by some) autumn buckwheat ( Hitachi  aki soba, 常陸秋蕎麦 ), a variety first developed only in 1978, which would be ready for harvest within a couple of weeks. In Tsukuba, I had seen plenty of little SOBA (buckwheat) fields, here and there, but certainly nothing on this scale. I quickly washed up and went out for a closer inspection. 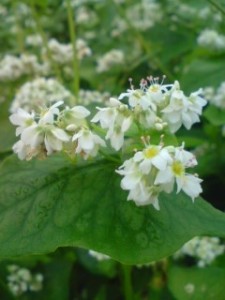 Close-up of Buckwheat flowers in Saiki, Tsukuba ( buckwheat which has strayed and gone wild can be found growing in Tsukuba, even in the most unlikely places. Remembering what its this flower looks like will help you spot any rogue plants in this season)

Before reaching the edge of the fields, I was quite overwhelmed by the powerful musk which these flowers gave off ( in fact, I first thought it was manure), and I was actually feeling dizzy. Crouching down to get a good look at the plants, I saw heart-shaped leaves and dozens of flowers on each stalk ( in fact hundreds bloom on each stalk over the growing season). When most of these blossoms s  start to give way to seeds ( which contain the part of buckwheat which we eat), it is time for harvesting. This is about 75 days after planting. 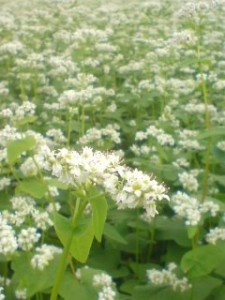 Because of this short time it takes to produce yields and its amazingly high nutritional content ( its packed with protein, amino acids, rutin and vitamins, especially E), buckwheat  has long been considered  an important emergency food in Japan. In fact, when SOBA was first mentioned in written records ( in the year 722), it was by the Empress Gensho commanding that buckwheat and barley be quickly planted for relief, as that time a famine seemed imminent.

This understanding of buckwheat`s health promoting powers might very well have been brought over to Japan from China or India. The reason I say this, is that the the Buddhist monks of the Tendai Sect (天台宗) , the founder of which, Saicho (最澄), had studied on the continent, had to undergo incredibly gruelling asceticisms. One of these is the GOKOKU-DACHI, a one-hundred day fast during which the monks could eat virtually nothing but buckwheat ! This makes it clear that Buddhists ( who had obtained so much wisdom from China and India) had a deep knowledge of buckwheat`s nutritional value and its ablilty to keep a man alive on IT alone ( even if just barely!).

Japanese warriors or travellers too, would carry buckwheat flour with them in case of emergency. This is because simply mixing it with cold water and drinking would provide anyone, even those  without  equipment for cooking, with adequate temporary nutrients.

So, while rice was THE most important crop, around which Japanese civlization ( culture, economy, politics) revolved, soba grew to be an important supplementary crop, not only for times of emergency, but for everyday nutritional balance as well. The fact is that the white rice which the ruling classes were so fond of, simply did not provide enough vitamins and soba helped them acquire what they lacked.

Nowadays, when we think of soba, we first imagine noodles, and in fact the word soba can actually mean noodles (as an alternate meaning- for example shina soba 、椎名そば, literally Chinese noodles, means RAMEN、while at festivals you can eat YAKI SOBA, literally grilled noodles, which are not made of buckwheat at all!). However, buckwheat was not served in noodle form until probably, the late 16th or early 17th centuries. Before that it was cooked using the whole grains to make porridge, or ground into flour and made into dumplings ( soba gaki- which were served to me once near Mt Tsukuba).

When soba noodles were developed, it was probably at a temple, which were repositories of many things Chinese, and China certainly had long been the noodle capital of the world.

The fact that buckwheat noodles later came to be identified with SHINSHU ( Nagano Prefecture), and especially the Togakushi ( 戸隠) Area is also perfectly logical, as  higher elevations, and areas with poorer soil, are perfect for growing soba. It was probably the great Feudal Lords and their retainers who  passed through this area on their way to Edo ( Tokyo) for their mandatory stays in the capital, who developed a taste for these noodles and led to the demand for the soba noodle restaurants which sprang up throughout the city.

Besides being considered merely nutritious, the Japanese ( and Chinese) also recognized certain medicinal properties related to buckwheat ( as they did for just about every plant and animal). The effect it seems to have been most famous for was clearing out the bowels. This is actually the reason that the custom arose ( sometime in the Kamakura Period 1185-1333) of eating soba at the end of each year- to cleanse the body of the past year`s accumulated impurities! And though originally this end-of-the-year soba was probably taken in porridge or dumpling form, today it is exclusively soba noodles ( toshi-koshi soba, the eating of which is one of the most popular New Year`s customs making the end of December by far the  busiest time of year for soba noodle makers) which are eaten. It is interesting that since the long noodles are now said to represent long-life and long-term good luck, the original purifying significance of the soba has been mostly forgotten.

I could go on and on about the history of this important crop and the many ways it can be enjoyed. But time is running out for the soba flowers in the fields. Id better upload this article RIGHT NOW so you can get out their and have a look at them for yourselves! Once again, I wont tell you exactly where they are, because the search is a big part of the FUN!

If after that ( and after hearing all about soba`s great nutritional value) you want to partake of the noodles themselves, remember- drink the soba water- SOBAYU, that they serve you towards the end of the meal. It contains most of the nutrients! 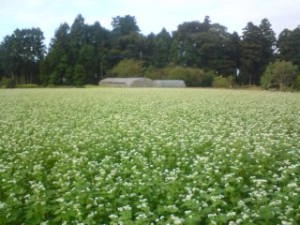