Garagara Sendo (ガラガラ千度)- an Annual Ritual in Which the Local Kids Have Been RAPPING for Centuries – Sunday September 8, 2019 8 September, 2019 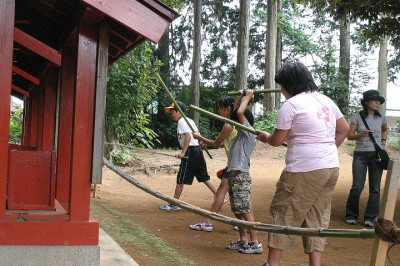 The children of Takasaki in the part of Tsukuba once known as Kukizaki, children beat the Yasaka Shrine, and all the sacred stones within its precincts with bamboo !
This year the ritual will be carried out this Sunday  September 8th

According to local lore, during the summer of 1574, an epidemic broke out in the hamlet of Takasaki ( now part of Tsukuba City`s Kukizaki Area). The village leaders dealt with this emergency in the way the Japanese had been dealing with the problem of pestilence for centuries- they opened up a branch of Kyoto`s Yasaka Jinja Shrine.

You see, in the summer of the year 867, during the Heian Period, the Capital had also been the subject of a raging epidemic- not surprising when considering all the waste and refuse which must have been festering in Japan`s sweltering summer heat. The Imperial Court took action which ( by chance) proved to be highly effective. They paraded large floats, which were brought out of the Yasaka Shrine, throughout the town. These contraptions had large antenna-like pole sticking out of them ( called HOKO), which were believed to suck up all the impure energies which were thought to be causing all the sickness.

The dramatic way in which the epidemic suddenly lifted after the performance of these rituals had a profound effect on the psyche of the Japanese, and in subsequent generations, branches of the Yasaka Shrine were opened up throught the country ( including dozens which still exist here in Tsukuba).

The impression was so deep that even 700 years after the first ritual cleansing ( noe known as the Gion Matsuri) was held in fever-ridden Kyoto, the best option for the people of Takasaki in the 16th century was of course deemed to be opening up a branch of the venerable Yasaka Shrine.

And what do you know! Shortly after the opening of the Takasaki`s Yasaka Shrine, the epidemic was cured ( according to local lore)- and the village was saved!

This story is given to explain the roots of a curious custom which has survived in Takasaki ( aroud the Yasaka Shrine for centuries.Each year, on September 19th ( though now it is the second Sunday of September), local children gather, and at 9 AM they begin to rap on the shrine and all the nearby sacred stones with bamboo poles. As they do this they chant: GARAGARA SENDO O-MAKA SENDO, HOI HO——-I !

But what does all this mean?

Well, first lets get back to the original Gion Festival and its incarnations found all over Japan ( usually carried out in July). After floats or portable shrines have been paraded through the streets ( supposedly sucking up impurites), they are cleaned, or refreshed- with water ( not unlike changing a vaccuum cleaner bag so that more dirt to be cleaned up).

Since the villagers of Takasaki believed that the shrine and its sacred stones protect them from sickness, fter summer has passed, they knock away all the bad energies and impurities by rapping on them with bamboo poles ( nit unlike beating on a dirty carpet!)

The chant itself means RATTLE RATTLE A THOUSAND TIMES AND A THOUSAND MORE-  HOI  HO-I !

It is my opinion that there is also a connection with the rapping and chanting to prayers for good harvest, As Tsukublog commentor Hanamizuki has recently pointed out, in the hamlet of Hakke, in Tsukuba City, young boys and girls go from house to house on the night of the full moon in September and beat the ground with bundles of straw. They also chant a similar ( in sound) song.

Anyway, no matter what it all means, it sure is strange and LOTS OF FUN!

For more ( and much better) pics of this ritual, see;