Ancestors Remembered Around the Autumnal Equinox ( and some photos of the O-Higan scenery from a bike-ride through Teshirogi, Tsukuba) 20 September, 2019 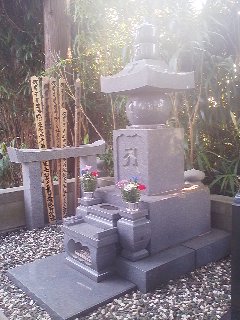 The grave of a former head priest of the Henjo-In Temple in Teshirogi, Tsukuba- with offerings of flowers and incense for O-Higan. The grand tombstone takes the form of GORIN TO monument with the five layers symbolizing earth,water,fire,wind and sky. Note the Shinto Torii gate and the SOTOBA wooden memorial slabs engraved in Sanskrit and Kanji, a reminder of the days before the Meiji Restoration, before Shintoism and Buddhism had been separated

The Japanese never go very long without taking care of their ancestors or departed loved ones. In fact, there are many who pray and make offerings at their family altar (butsudan) every single day. In addition, as part of the annual cycle of events, there are four times a year (besides individual memorial days) for special ceremonies in which extra efforts are made for family members who have passed on: New Years, O-Bon (in August) and then the week around (three days before and three days after) the equinox days. In fact, there are national holidays in March and September making it possible for anyone who wishes to do so to visit their family graves for O-Higan (for more detail see my article). 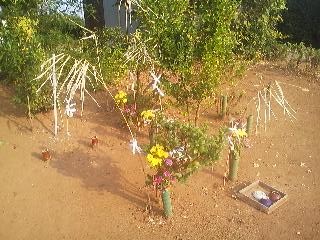 Flowers left at old mound-type graves at the Henjo-In Temple, in Teshirogi- which was once the headquarter of the Anti-Tsukuba Science City Development Movement.

Since higan-iri (彼岸入）, the first day of O-Higan which was htis past Sunday, I have noticed, on my morning walk that the graves in all the old neighborhood cemeteries have been swept and decorated with offerings of seasonal flowers. 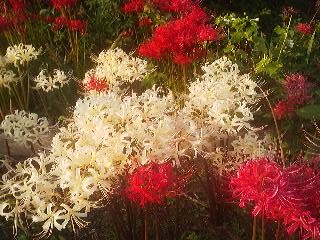 Red and white spider-lilies (HIGAN BANA) grow in a cluster outside a graveyard in Teshirogi, Tsukuba

In and around these graveyards, and in many other places as well (the gardens of old houses, parks, or even along the road), are the amazing higanbana. These flowers are so named for the very fact that they appear, each year, during the higan season. 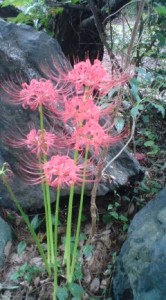 At convenience stores, department stores and traditional sweet shops, O-Hagi are on sale. These are oval shaped mochi-rice cakes, covered with a layer of sweet beans, soy bean powder, or black sesame. You can buy them individually, or in sets. The name of these traditional cakes during the autumn o-higan is o-hagi because hagi are a typical flower of this season, while the same sweet cake in spring is called botan-mochi, after the peony, a typical spring flower. 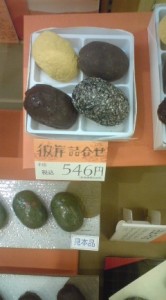 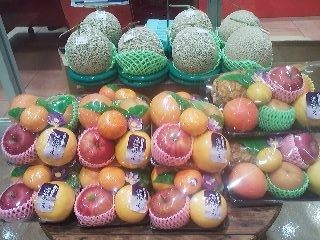 You will notice that many Japanese, when talking about the weather will use the expression- atsusa samusa mo higan made (hot and cold until O-higan), which I guess means that the equinox days (spring and autumn) are seasonal and climatic turning-points. With the crazy weather we’ve been having who knows when it will get cooler. One thing is for sure, though, the nights will start getting longer and longer, until next spring’s equinox. 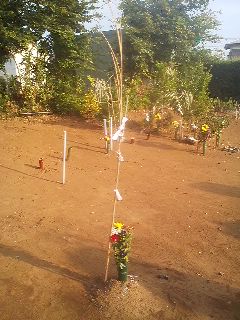 While most people in Japan today are cremated after death, the deceased were actually buried under these mounds in Teshirogi, Tsukuba- these poles, derived from the Shinto YORISHIRO, act like antennae, attracting the souls of the deceased back to their graves from the world beyond. 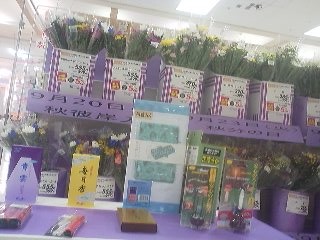 Flowers, incense, candles and packs of fruit are on sale at supermarkets and department stores for O-HIGAN 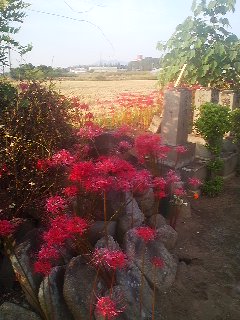 HIGAN-BANA at an old grave-yard in Teshirogi. The cluster of old sacred stones are a typical feature of temples,shrines and graveyards in Japan. The stone, rendered homeless by road construction or other types of developmnet are moved to “sacred places” instead of being disposed of. 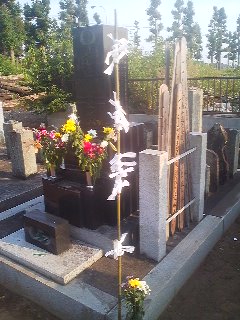 Grave with offerings in Teshirogi, Tsukuba 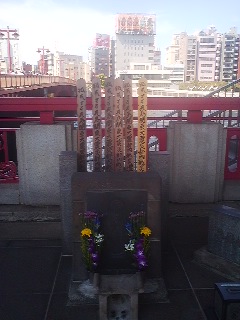 A day earlier, at Muko JIma in Tokyo (across the Sumida River from Asakusa) a memorial to the victims of the Great Kanto Earthquake of 1923 with offerings of flowers and incence for O-HOGAN