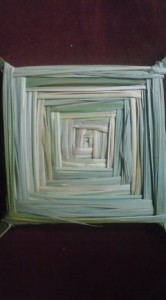 Traditionally, the summer O-Bon Festival, in which Japanese families celebrate the return of  the spirits of their ancestors, has been , along with winter`s O-Shogatsu ( The New Year Festival), one of the two most important events of the year. It is also one of the busiest, especially for those living out in the country, who until recent decades, not only had to do lots of cooking and cleaning, in preparation for return of numerous family members ( both living and deceased!) but also actually MADE, by hand and using readily available materials, the festive decorations needed for properly greeting, celebrating, and then sending off the ancestral spirits. 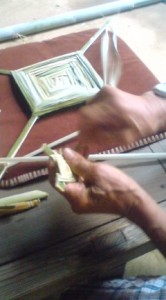 Startng to work on the lantern

In recent years, however, with the ready availability of these O-Bon related GOODS at shops throughout Japan ( including the deep countryside), even those who still do try to keep the O-Bon traditions alive, DO NOT make the paraphanalia of the festival themselves anymore. And though this means that preparing for the festival is much simpler, and certainly less time consuming, the store bought goods are quite standardized, meaning that all the great variety which existed in these implements and decorations between EACH VILLAGE and EACH NEIGHBORHOOD has been or is being lost. 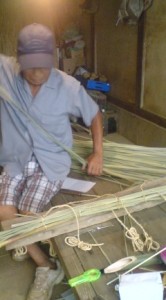 Yaguchi-San working on the O-Za, a mat for o-Bon offerings

Also, in Japan, where EFFORT ITSELF is seen as a form of affection, it can be said that buying cheap and chintsy products from the store instead of making them with care at home, shows much less devotion to the spirits of ones ancestors than had existed in past ages. 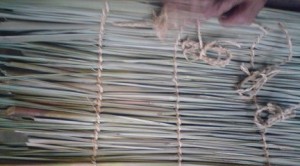 A closer look at the mat, made of Makomo- Manchurian rice gras, and home-made twine

That is why it is so impressive to visit  the home of the Yaguchi family on August 12th ( the day before the ancestors are greeted at the cemetery), for the senior Mr. Yoshiro Yaguchi ( 81) is the the last remaining person in Tsukuba`s Kami-Hiro-Oka neighborhood to still fashion by hand the distinctive local style  of O-Bon ware-  a tray ( O-Zen) for carrying offerings to the graves, a mat ( O-ZA) for placing the offerings in front of the family`s Buddhist Altar ( Butsudan), and a small, hand-held lantern with which to guide the spirits back to the graveyard (and beyond). 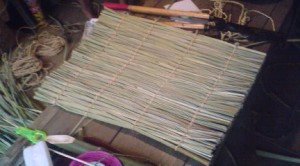 When I arrived at his home yesterday, the cordial Yaguchi-San ushered me to his work area in the back, where I found placed on a bench, a bundle of the long and thick wild grass called MAKOMO ( Manchurian wild Rice, Zizania latifolia), which he had gathered that morning from along the banks of the Hanamuro River. 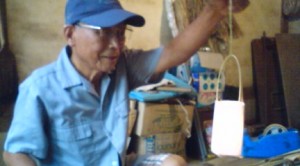 The lantern- finished and lit! 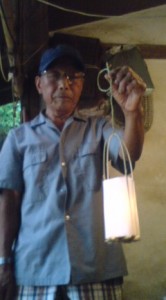 Yaguchi-San used blades of this grass, along with thinly cut strips of bamboo he had also just harvested and a little Japanese paper, to make a small lantern. The concentration and dexterity he exhibited was startling, and I would even say moving, since all these efforts were being done out of devotion to his ancestors and with the spirit of keeping his local traditions alive. When lit, the lantern looked uniquely delicate, one could say perfect for guiding ancestral spirits back to the other world. 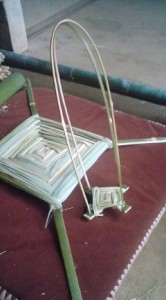 The O-Zen ( tray) and the foundation for the lantern

The same grass was used to weave a tray for offerings at the graves, and then in a much larger effort, to make a mat, on which offerings- this years fruits and vegetables will be offered.

Watching Yaguchi-San work, using only wood, grass and straw, made me lose my self in time, and I imagined myself being in some distantly past age.

One more thing which Yaguchi-San made was a flower vase. A segment of freshly harvested bamboo slit on top in a diagonal cut- perfect.

As I left the Yaguchi`s to the rest of their busy O-Bon preparations, I realized that next year I would have to come back with a video camera. To preserve for posterity ( though Im sure Yaguchi-San will be around for many years to come) Shimo-Hiro-Oka`s unique O-Bon decorations. 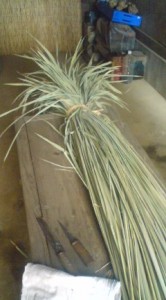 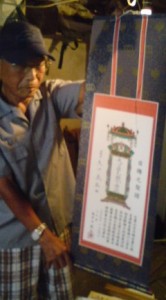 Yaguchi-San showing me one of the hanging scrolls, which he brought back from one of his 3 pilgrimages to the Hase-Dera Temple in Nara Prefecture, which he will hang in the alcove ( tokonoma) during the O-Bon period

This evening people around Japan will be going to the cemetery to greet their ancestors and guide them back home. 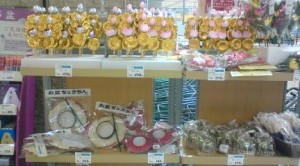 O-Bon goods at a supermarket 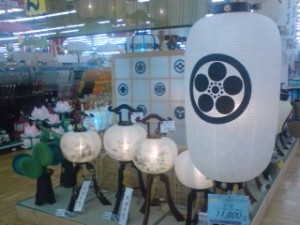 O-Bon lanterns on sale at a Home Center

In Tsukuba, there are some unique and fascinating ways of doing this.