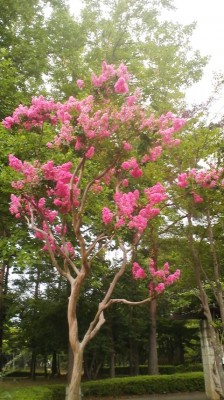 By Avi Landau For years I had been under the mistaken impression that this ubiquitous summer-blooming tree was called a salisbury tree, always thinking that perhaps it had been introduced from England. This was just my assuming that SARU SUBERI was the katakana influenced pronunciation of the well known British Cathedral town (and in fact that is exactly how the Japanese WOULD pronounce that place name). 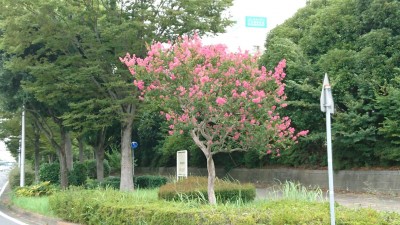 A sarusuberi tree at the corner of Nishi O-dori and the Tsuchiura Gakuen Line (August 29, 2018) provides the only color (besides green) in the entire surrounting area.

I felt a bit embarrassed when I finally discovered the true meaning of the Japanese tree name, saru (monkey), and suberi (slide). It seems that this unusual moniker came about as a reference to these trees’ smooth, barkless trunks, which would probably make it difficult even for monkeys to climb. Thus it is the MONKEY-SLIP tree, and not the Salisbury. 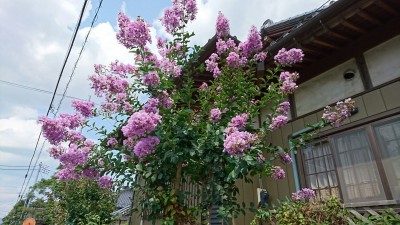 Sarusuberi looming over a fence in Karima, Tsukuba.

These trees originally came from Southern China and became popular in Japan during the Edo Period (1600-1868). Though they are still used in Japan, the Chinese characters used for this tree have a completely different meaning (and usual pronounciation) from monkey-slip : 百日紅 literally means “one hundred days red “, and would normally be read in Japanese as HYAKU NICHI KO, though as is the case with so many flowers and trees in Japan, a completely different reading must be memorized. 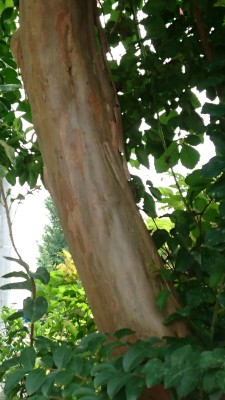 The sarusuberi trees have distinctive trunks, so slippery that not even a monkey could climb (thus its Japanese name: the Monkey Slip Tree). The trunks look more like plastic.. or varnished wood than natural wood.

These Chinese characters were selected for good reason. The sarusuberi (crape myrtle in English) is a very long blossoming tree. One of the longest, in fact, and that is why you have one-hundred days of red (though, the tree can also have white, pink or purple flowers). This tree`s wood is very hard and slow growing. Sometimes the trunk  is used as a post in the alcoves (tokonoma) of Japanese style rooms. But the sarusuberi is most noticeable  in the intense heat of August. While most other flowers wither away, it will be keeping the neighborhood alive with full-color. Just don’t try to climb it! 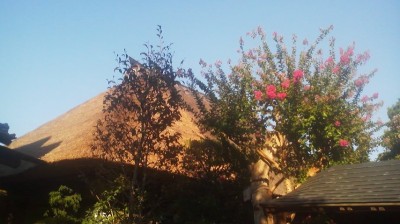 A SARUSUBERY (crape myrtle) tree blooming in front of a thatched roof house in Saiki, Tsukuba