Gone With The Dew- The tiny, blue blossoms of TSUYUGUSA (露草) Appear Before Dawn and Vanish by the Afternoon (again) 26 August, 2019 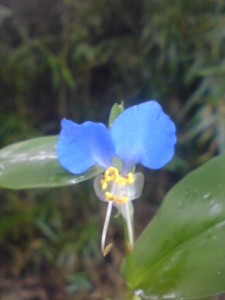 Tsuyugusa ( a dayflower) in Tsukuba

It was thanks to having a dog, that one summer years ago, I first noticed the TSUYUGUSA in Tsukuba . Going out for our early morning walk, I  saw that the paths we took through the fields were lined with little, low lying  flowers- strikingly blue, which seemed to grow in loose clusters. Later the same day on our evening stroll along the same course, with field guide and camera in hand, I hoped to identify and photogragh the  blossoms. Much to my surprise- THEY HAD ALL DISAPPEARED !

I sifted through the grass searching for fallen petals at the spots where I was sure the flowers had been, but alas, there were none to be found. I soon noticed  hints of blue swallowed up tightly by the green leaves of the now blossomless plants.I realized then that the flowers had closed up and were now hidden away. Checking again and again  throughout that August, I was able to determine that the blue blossoms would already be out  by the crack of dawn, and would be gone sometime around noon. I had also by then already learned that in Japanese these flowers were called TSUYUGUSA (literally dew grass), because like the dew, they appeared at dawn and faded away  with the passing of the morn. 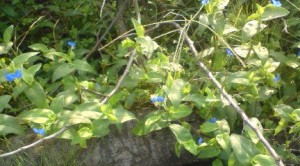 It should come as no surprise to anyone familiar with Japanese culture to learn that this  plant should have become a symbol of early autumn (yes, August, the hottest month, is early fall according to the traditional calendar), and more importantly an image used by poets to evoke THE PASSING NATURE OF ALL THINGS. This is not only because of the flowers` daily midday disappearing act, but also because the light blue dye made from their petals which were used to color textiles or paper, very easily fades with exposure to water or sunshine. 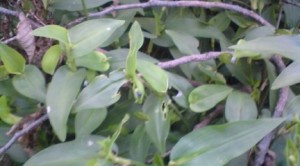 The Manyoshu, the earliest collection of Japanese poems actually refers to the same flower by the name TSUKIGUSA (月草), which though written with the character that means moon, actually derives from the word  TSUKU (着く）which meant to dye fabric by rubbing it  with flowers. It seems that in ancient times, before sophisticated dyeing techniques were developed, this was actually how garments were colored, and tsuyugusa ( tsukigusa) was commonly used for that purpose. The result was beautiful, but short lived.

Here is a poem, from the Manyoshu, which compares the prospect of starting a love affair with a certain person to dyeing cloth with the fast fading blue dye of the TSUYUGUSA: 月草に衣色どり摺らめどもうつろふいろと言ふが苦しさ  ( TSUKIGUSA NI KOROMOIRO DORI NARAMEDOMO UTSUROU IRO TO IU GA KURUSHISA) – which I roughly explain ( I dont want to say translate) as- I am thinking of dyeing the fabric with the color of the TSUYUGUSA, but imagining the pain which would be caused by the color quicky fading away, makes me hesitate to do so. 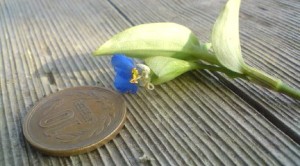 Early wood-block print artists also used the tsuyugusa for their works (before Prussian Blue was introduced from Europe), though the beautiful color still faded away , as did painters in other styles, as well as potters.
In preparation for writing this post I asked some friends and neighbors about any recollections that they had regarding tsuyugusa. Interestingly, several women mentioned how when they were little girls they would make COLORED WATER (iro mizu) from it. 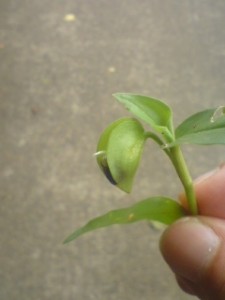 The flower closed up at noon.

You will find tsuyugusa ( Asiatic Dayflower in English) in the shadowy spaces along roads and paths throughout Japan from June to September. I have heard that some consider it a pest because it can spread so quickly, but it would take a hard heart indeed to uproot this beautiful and thought provoking plant. 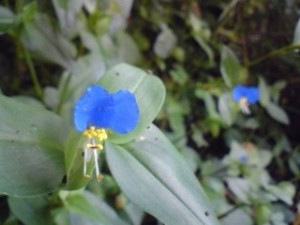 And if you are wondering why it hides away at noon…. well, isnt that what we all want to do on summer afternoons in Japan?