The Night of August 18th Should be a Magical One on Mt Tsukuba at the Omido Temple`s Mando-Sai (大御堂万灯祭) 17 August, 2019 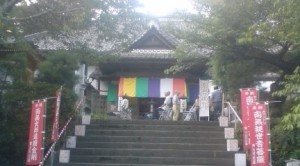 The Omido Temple, just below the Mt Tsukuba Shrine ( where the temple`s Main Hall once stood)

Most visitors to Mt. Tsukuba  make a stop at the large Shinto Shrine  called the Tsukuba-San Jinja, where the spirits of Japan`s mythological First Couple- Izamagi and Izanami are enshrined. There, prayers can be made for finding a good match ( EN MUSUBI) or for marital harmony ( FUFU WAGO). The shrine in way, has become the most famous SIGHT on the mountain, a MUST SEE for all tourists to the area.

Few now know, however, that from the 8th century until the late 19th century, the area on which the great shrine now stands was the site of a large BUDDHIST TEMPLE COMPLEX ( which also contained several shrines) called  either Tsukuba-San Dera, Chisokuin-Chuzen-ji (知足院中禅寺), or just plain Chuzen-Ji (中禅寺）.

According to local lore , the temple was first founded in 782 AD by the Priest Tokuitsu (徳一), of the Hosso Sect ( one of the Six Sects Of the old capital of Nara), said to be a surviving son of Fujiwara no Nakamaro ( who along with most of his family was put to death for attempting a coup d`etat in the year 764). Tokuitsu had been living at temples ( including Todai-Ji) since childhhood and went on to found numerous temples throught eastern Japan. 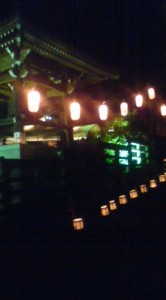 When you think about it, it was only natural that Mt Tsukuba be selected as a site to open a Buddhist temple. Since ancient times the mountain itself ( in its entirety) had been considered sacred, most probably because of its TWIN PEAKS, which for the ancients represented the male and female forces. The mountain had long been the site for KAGAI ( also called UTAGAKI), a kind of MATING festival which was held twice a year ( at a site not very far from where the Mt Tsukuba Shrine now stands and at other sacred moutains around Japan as well). Numerous poems describing the experience of this ancient rite can be found in the Manyoshu ( the oldest collection of Japanese poems).

When Tokuitsu arrived at Mt Tsukuba, as a representative of (at that time) the religion which had been adopted by the Emperor and the court, he was able to link the concept of the MALE and FEMALE forces of the mountain with the officially sanctioned histories of the Imperial Family and the Yamato People, by introducing the story of Izanagi and Izanami ( who are enshrined at the mountain today). Buddhist referred to these deities as Nantai no Gongen and Nyotai no Gongen, respectively.

Though Tokuitsu was a fierce and vocal opponent of the newer (to Japan) types of Buddhism which were becoming popular in Japan during the Heian Period ( the Tendai and Shingon Sects), not long after he founded his temple, the great priest Kukai ( Kobo Daishi) is said to have visited and converted it to the Shingon Sect. The multi-talented monk is said to have carved the temples main image, a SENJU KANON ( 千手観音- Thousand Armed Kanon), at that time ( though this should be taken with a grain of salt, since their is no proof that Kukai ever travelled further east that the Izu Peninsula !). 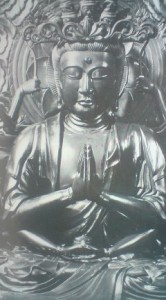 A close-up of the Senju Kannon, the Central Image at the Omido Temple (大御堂) on Mt Tsukuba

Anyway, the temple DID become connected with the Shingon Sect.

In the following centuries, the Chuzen-Ji Temple and Mt Tsukuba itself became a well know training ground for Shugendo(修験道), which combined elements of Buddhism and native beliefs and involved severe asceticisms which were supposed to bring magical powers to practioners. Women were stricly prohibited from ascending the mountain. The killing of any living creatures and the drinking of alcohol were also forbidden.

Political control of the mountain ( and temple grounds) over that period was at first in the hands of the Hata Family, most notably Hata Tomoie ( 八田知家), whose descendants long ruled the area under the name of Oda.

It was with the ascension of the Tokugawa Family and the subsequent Edo Period ( the Tokugawa Period  1600-1868) that the Chuzen-Ji Temple came to have its Golden Age. 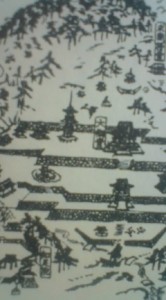 Chuzun-Ji Temple on Mt Tsukuba in its glory days. The three tiered pagoda and Main Hall ( to its right) were destroyed along with most of the other structures depicted here in thr early Meiji Period

The reason for the temple`s sudden rise in importance was its location- to the north-east of Edo Castle, the seat of Tokugawa power. It has long been a belief in Japan, that evil or misfortune come from that direction, and it is considered important to protect oneself. That is why in the same way that the great Enryaku-Ji Temple on Mt Hiei near Kyoto was built to protect the Imperial Palace, the Chuzen-Ji Temple on Mt Tsukuba was built up to protect the Shogun.

A new abbbot was installed by the Shogun and the temple was given a generous annual allotment. The 3rd Tokugawa Shogun, Iemitsu, was especially interested in Chuzen-Ji`s upkeep, and beginning in 1626, seven years were spent renewing the various temple structures ( which included some shrines, as well).

When the Shogunate was on its last legs in the 1860`s, it was at Chuzenji`s Omido Hall that Fujita Koshiro (藤田小四郎) and his band of Tengu-To (天狗党) warriors from Mito set up a base camp from which  to fight their battle to Revere the Emperor and Expel the Barbarians ( Sonno Joi,尊王攘夷). Fujita and his ill-fated men soon headed off to try to meet the Emperor in Kyoto but were captured and tortured to death by samurai of the Kaga Clan.

The eventual fall of the Shogunate, however, sealed the great temple`s fate. The new Meiji government issued and order to separate Buddhism from Shinto (神仏分離, Shinbutsu Bunri) and also enacted a policy to suppress Buddhism in general ( 廃仏毀釈, Haibutsu kishaku) as being an ideology of alien origin.

Most of the structures which belonged to the temple were destroyed ( only one gate and the unique sacred bridge- shinkyo、 神橋 survived) in the iconoclastic fervor ( dont forget that this was a temple especially favored by the fallen regime). Numerous statues and other paraphanalia were thrown into Bonfires. 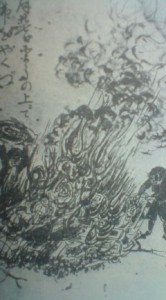 Buddhist treasures being tossed into bonfires on Mt Tsukuba in the early Meiji Period (1873?)

Importantly, however, local believers were able to hide away a few important images, including the Senju Kannon Statue. This was kept buried underground for decades until it was deemed safe to bring back out again ( and it can be seen today in the Omido Temple`s Main Hall.

Other surviving images can be seen at various temples around Tsukuba. The most impressive of these probably being the Nio Guardians which can be seen at the Tofuku-Ji Temple in Konda, Tsukuba.

On the site of the old Omido, the main hall of the Chuzen-Ji Temple, the Tsukuba-San Shrine was built, and in 1873 it was designated as the prefecture`s premier shrine ( it is now the Kashima Grand Shrine which holds the honor of that title).

In 1930, a small temple was built just below ( and to the left of) the Mt Tsukuba Shrine. A much more considerable structure was erected in the 1960`s- what is now today`s Omido (大御堂) Temple, a shadow of its old self, but still dignified and certainly worth a visit ( though few tourists to the mountain do- compared to the throngs that visit the shrine, though the temple is number 25 on the Bando 33 Kannon Temple pilgrimage circuit).

Two years ago, on August 18th 2011, I was lucky enough to be at the Omido for what turned out to be a truly magical evening. It was the night of the Mando-Sai ( Lantern Oferring Ceremony) and when I got there at about 5:30 pm, worshippers were writing there wishes on the paper linings of lanterns which they then placed along the temples pathways are in its pond. 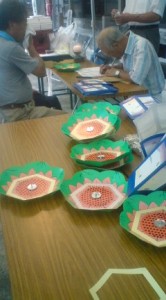 The wishes that I saw being inscribed were mostly for household or traffic safety, for health and for business success. 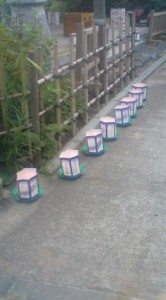 The worshipers then proceeded to take a seat (outdoors), to wait for the onset of prayers for the consolation of the spirits of thos who died in the recent earthquake and tsunami. 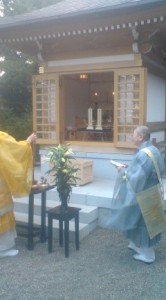 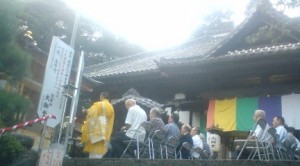 Getting ready for the IREISAI, a prayer to console the spirits of the those who died in the disaster of March 11th 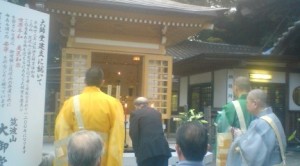 This ceremony (ireisai, 慰霊祭) was conducted by two young priests and an older nun. Their sonorous chanting harmonized hypnotically with the hum of the cicadas roosting among temples impressively old ( and huge) trees. 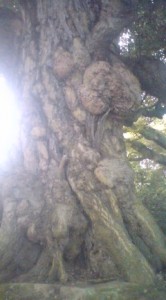 One of the grand old trees within the temple`s precincts

After about 30 minutes we all stepped into the temple, and took a seat ( Japanese style) in front of the temples main image- the Thousand Handed Kannon.

The ceremony which then began was special indeed, for believers it was said to be as effective in gaining merit as it would be visiting the temple on 46,000 normal days. I guess that is whty the place was packed. 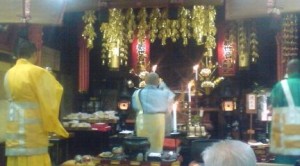 Inside the Omido`s Main Hall for special prayers to the Senju Kannon ( equivalent in merit to 46,000 such prayers on regular days!)

The proceedings were led by the nun, who as joined by the young priests in what was surprisingly melodious chanting. 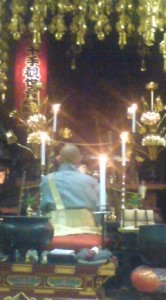 After this ceremony ( and all the merit gained!) we stepped outside into the beautiful night again. Though in my case I should say that I HOBBLED out, since my legs were completely numbed by the long sit Japanese style. 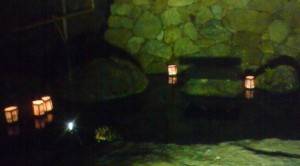 Painfully making my way down the staircase to the temples plaza like space below, I saw Juha (樹波）, Tsukuba`s great Wadaiko ( Japanese drums) ensemble, setting up.

I knew that we would be in for some thrills.

And despite the fact that there were fewer listeners than drummers, Juha did not disappoint, dazzling me with rhythms that summoned up all my primieval emotions and carried me away……..

The lantern light and lightning flashing off in the distance made the whole experience even more mystical.

After kindly going their set ( we were less than ten people!), they even went on to lead us in some wild Bon Dancing. while three of Juha`s members went on to perform an absolutely crazed percussion improv. 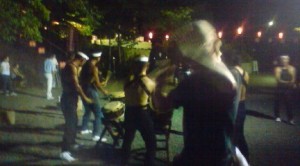 I guess they understood that the few of us who were there, really appreciated their talents. 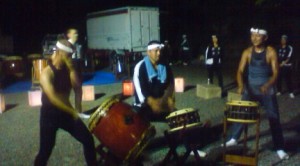 With plenty of thank yous, lots of merit, and a head spinning from the rhythms and beer, we took our leave, knowing that we would HAVE TO come back next year! 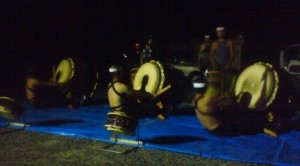 And dont forget. When you do visit Mt Tsukuba and its famous shrine, dont forget to make a little detour to the Omido Temple, and think about the mountains very COMPLEX religious history.