The Japanese, In General, Are Surprisingly Talkative When it Comes to the Subject of WHALING- but, unfortunately they miss the Key Point- Whales Need To Be Protected from Whalers of ALL NATIONS, or they will hunted to extinction 15 July, 2019 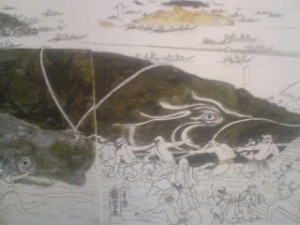 It could be said that ABOVE ALL the Japanese value harmony. That is why, in comparison to many other countries, it is rare in Japan to hear strong opinions voiced on any topics other than the weather or food ( ESPECIALLY food!).

That is why it is always a bit surprising for me when Japanese students, friends or aquaintances of mine, speak out so strongly and confidently on the subject of whaling, asserting that restrictions on Japanese whalers are unfair and insensitive to Japanese culture. They do this even though they  know very well ( in the cases of students and friends) that I am a firm opponent of whaling and a supporter of strong international treaties and laws protecting dolphins, whales and other wild creatures. Still they do not shy away from direct confrontation when it comes to this subject .

You could say that one reason  the Japanese might feel comfortable with this topic, is that for them, it too is a FOOD ISSUE, since many Japanese are fond of eating whale meat.  But what really gives the usually diffident Japanese the confidence to talk out so firmly on whaling is that they dont really have to develop any line of argument on their own. They merely have to parrot the OFFICIAL SPIEL which has been drilled into their heads by the government, the media and their teachers over the past few decades, an argument which  makes the international whaling ban seem to be a case of Japan being unfairly bullied into submission by foreigners who are not only arrogantly insensitive to Japan`s unique culture, but  also ridiculously hipocritical.

In recent weeks, I have been hearing this standardized opinion ( which I will soon detail) , in much greater frequency than usual. This is because the issue has been IN THE NEWS, with there having been unpleasant  incidents involving Japanese whaling ships and sea-borne anti-whaling activists AND with the film The Cove, about a Japanese town`s annual dolphin slaughter, winning the academy Award for best documentary ( the Japanese are VERY Oscar conscious, but dont count on this film turning up at your local video store soon, if you live in Japan!). 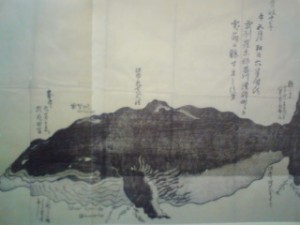 A chart showing the choice sections of a whale

The Standard Japanese Spiel on The Whaling Ban

Japanese government propaganda makes the international whaling ban seem like a blatant example of foreign ( i.e. American) hipocracy and of Japan being treated unfairly or even bullied.

How many times have I heard it ( in nearly the same words):

You foreigners are strange! You dont eat whales because you say they are intelligent. But you eat pigs! Aren`t pigs intelligent! You say you love whales and want to protect them- but what about cows and sheep! THEY are OK to eat? But are they not gentle and noble creatures as well ?

The argument then continues:

We Japanese not only eat the whales meat, but we use EVERY part of the animal in some way, wasting nothing!

Many who grew up just after the war also reminisce fondly about the delicious whale meat that they would often be served as part of their school lunches, saying that they would like to be able to continue to enjoy that traditional fare every now and then. 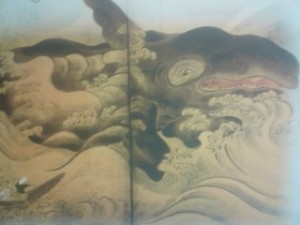 A whale pursued by Japanese whalers

My Response To These Arguments

First and most importantly, it must be pointed out that the ban on whaling does not target Japan in particular. It was enacted to protect whales from the whalers of all major whaling nations, including that greatest whale slaughtering country of all time The United States.

No, all Americans do NOT love whales. There are many, who are chomping at the bit, waiting for a chance to catch some whales and sell them to the highest bidder. Whales would mean BIG BUCKS for anyone who caught them.

( I have even heard of Native American tribes who have applied for special permits to hunt whale for what they say are traditional religious ceremonies. After going through the motions of some newly revived, or created rite, they promptly sell the animal to Japanese companies for sums of at least 100,000 dollars)

Whales are not being protected because they are intelligent ( and I wish that conservationists would not stress these animals mental capacity). In fact, the reason that they MUST be protected is that, in a way, they are TOO STUPID and have no way to cope with the MODERN TOOLS OF WHALING- most importantly the technology to easilly locate the large mammals and get to them and kill them quickly.

With all the money involved, there is NO WAY that whales, especially the larger ones will be able to survive if whaling were liberalized. They would NOT only be hunted  by Japanese whalers, but by whalers of many nations.

It is not only Japan which has a great tradition of whaling. How about the United States? Why was Hawaii so important to the US that it had to be occupied? For Whaling! Why did Perry come to Japan, an event which eventually led to the opening up of Japan and the fall of the shogunate- for whaling!

What I want to say is that the  ban on whaling was not enacted to single out the Japanese and curb their traditions. It was implemented to prevent all those of ANY nationality who want to profit by killing whales from doing so.

It is ridiculous to compare whales with cows, sheep or pigs. Not because whales are more intelligent, but because the populations of the latter animals can be controlled, and in fact their numbers are many, many times greater now than they were in past centuries ( not that these domestic animals do not suffer terribly in many cases while being raised and then later when slaughtered).

If whales could be hunted freely they would very likely DISAPPEAR. Would the Japanese suggest that ONLY JAPANESE whalers should be allowed to hunt?Now THAT would be unfair. It might be true that the Japanese would use every last bit of the whale for some purpose or other. But believe me, any modern company of any nationalitiy would squeeze every last possibble cent out of any whale that they caught. Surely nothing would be wasted.

As for those Japanese who nostalgically look back on their whale meat school lunches, I can only say: You Dont nned it ! Now youve got more ( variet and quantity), and tastier foods easilly available than you could have ever imagined in those desperate post war years.These days walking through a Japanese supermarket at night before it closes can bring tears of shame to my eyes from looking at the huge quantities of unsold food which will  goes to waste! You dont need whale. (If people were starving that would be a different story).

And anyway it has always surprised me how despite the ban on whaling, ther is SO MUCH whale meat available at shops or restaurants, especially in certain prefectures- Nagasaki, Shizuoka, etc. Just where does all this whale meat come from? 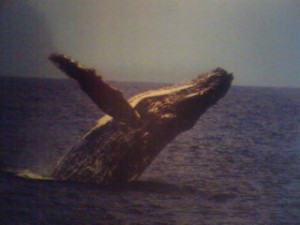 You could say that it is noble how the Japanese government stands up for it fishermen, even against all the foreign criticism. But with all the traditional trades that are fading fast or have already died out it seems strange to me that the whalers would be given so much support. What is most shocking is that in Japan, this country which is so exceedingly concerned about food safety ( especially when it comes to food from China) whale and dolphin meat, known to contain high amounts of mercury, are proudly and patriotically consumed by those who do it a s a point of national pride! 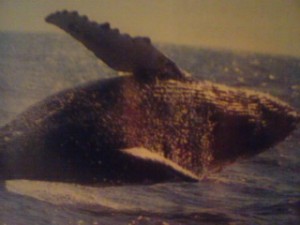 If the Japanese government want to move with the times they would try to turn the whalers into whale watching guides. This would be a healthier, more sustainable and much greater contibution to the country than just providing proteins.

What can be more thrilling than seeing a LIVE WHALE IN THE WILD. I have  spent a great deal of time in my life nature watching. I have been to The Gallapagos, the Masai Mara, The National Parks of India, Malaysia, etc.

There have been many great moments. But what could compare to walking along a beach in Hawaii looking out at the sea and suddenly seeing a humpback whale breaching out in the distance. The crowd grows and cheers with each leap, twist and splash.

My greatest whale story, though, took place right here in Japan. Well, in a remote part of it- The Ogasawara Islands.Out on a whale-watching tour we came up to a group of 18 sperm whales- females and babies!  They were not jumping or playing- just drifting. The most astounding and unforgetable thing about the encounter, however, was the breathing. They all seemed to be inhaling and exhaling in unison- a long deep resonant series of wwwwwwwwwwwwwwwwwwwwwwwwooooooooooooooooooooooooo

I think it is important that we ensure that future generations can enjoy similar moving encounters with our fellow creatures ( and with cows as well! Though cows on the farm will surely always be around) . We have destroyed enough of the earth, and we , in Japan, certainly have more than enough to eat.

Japan DOES have a great whaling tradition which I would like to write about in a future posting. But lets leave this to the history book and museums to preserve. The whalers have to change with the times and turn in their harpoons on their ships for binoculars and cameras, the tools of the new generation of WHALERS.

And dont get me wrong. I do not want to seem as if I am singling out Japan as the only country in which people are taught to memorize simplicistic notions which back up the actions of its fellow countrymen. I mean when I was growing up in New York I often heard even the most intelligent and logical people defending the dropping of the atomic bomb, which instantly vaporized a hundred thousand people, and then slowly poisoned through irradiation countless other men women and children, by saying- Well…they attacked Pearl Harbour!! Pretty scary logic. Wouldnt that mean that Vietnam would have been in the right to nuke the US!

Anyway. I hope that people all over the world will try to think more carefully about the issues instead of just eating what they are fed.

And I hope the Japanese remember- they are not the only ones targeted by the whaling ban. The restrictions are NECESSARY not ridiculous! 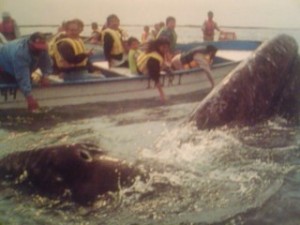