Taking a Closer Look at a Typical Shrine ( the Yasaka Jinja in Karima, Tsukuba) – and it`s Summer Festival (this year on the evening of Sunday July 21st) 21 July, 2019 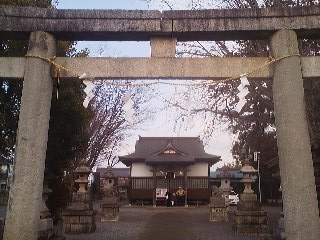 The Yasaka Shrine in Karima on a usual day. You can see the typical shrine entrance to a shrine- the TORII gate (a passageway to a sacred space that is always open) that distinguishes it from Buddhist temples. The rope and paper (shaped like lightning) also demarcate sacred space. Lighting represents contact between the deities and the earth- in fact the Japanese word for it: INAZUMA (稲妻) means the Bride of the Rice, as the lightning bolts are believed to bring the “life force” to the paddy fields. 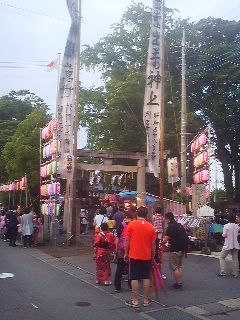 In front of the same shrine on the day of its summer festival. Note the banners raised on the high poles to proclaim that the matsuri is “on” and the colorful lanterns (which have the names of sponsors written on them). 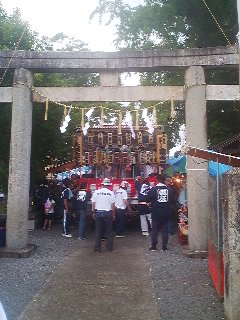 Struggling to get the hefty MIKOSHI (portable shrine) through the torii gate.

I pass the Yasaka Jinja Shrine in Tsukuba`s Karima neighborhood nearly every day. It lies along the old road that runs through Karima, a narrow fhoroughfare lined with grand old houses-  in large walled and gated compounds, many with finely tended Japanese gardens.

The Yasaka shrine is not large or grand- it is a typical local shrine- but very often when I pass it I notice a worshiper or two, standing in front of the hall (and the coin box!) with hands together in prayer. 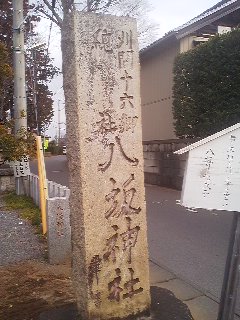 The unique feature of Karima`s Yasaka Shrine is this large stone marker from the late Edo Period – the engraving is said to be based on a inscription written by Hosokawa Akitsura (1833-1907) the lord of the Yatabe Domain- of which Karima used to be a part of.

Since this weekend is the shrine`s main festival: the Gion Matsuri (similar festival will be held in dozens of other neighborhoods in Tsukuba, as well, tommorow), I` d like to tell you what the shrine is like on a REGULAR DAY (KE NO HI) instead of a festive one (HAREH NO HI)- which might be the only time you visit it. 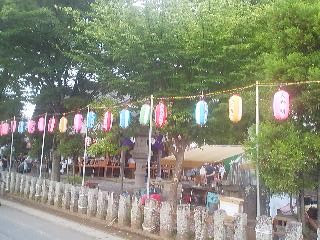 These colorful festive lanterns (with the names of sponsors written on them) are put up a few days before the festival day. 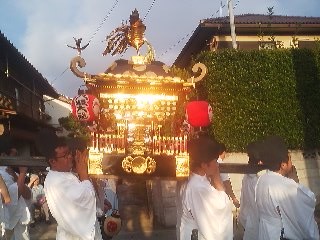 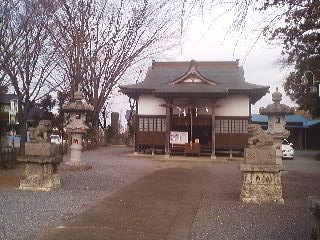 The Yasaka Shrine in Karima the pathway to the shrine is lined with stone lanterns and KOMA INU (Guardian dogs- actually mor like Guardian lions!) which are distinct from the fierce looking Nio gurdians that protect temples (though both KOMA INU and NIO represent AH and UN- the first and last syllables in Sanskrit with one open mouth and one closed. 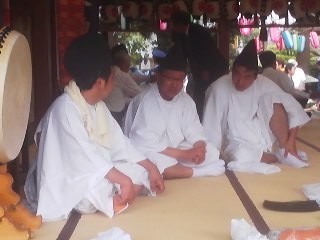 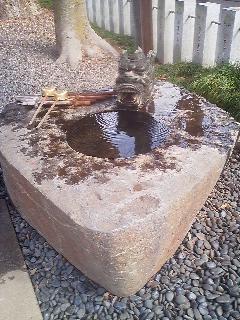 Shrines almost always have a basin for ritually cleansing the hands and mouth. Very often the faucet is rendered in a dragon motif- since dragons are closely connected with water in oriental culture. 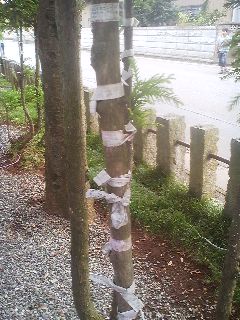 On the day of the summer festival, many revellers draw their fortunes (OMIKUJI)- after reading of their fates on the small strips of paper, many tie them to the branches of trees or around railing within the shrine`s precincts. Interestingly, some Japanese people will tell you that they only tie bad fortunes at shrines and take good ones home with them- while others will tell you that they tie good fortunes- and there are yet those who tie any fortune they get to a branch or rail at the shrine at which the fortune was drawn. 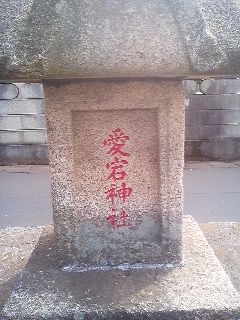 While the chielf deity at any Yasaka Shine is SUSANOO NO MIKOTO, and the main power (GORYAKU) is believed to be preventing illness, there are other deities enshrined in smaller hall, or stones- this is a small ATAGO SHRINE- which is believed to help prevent fires. 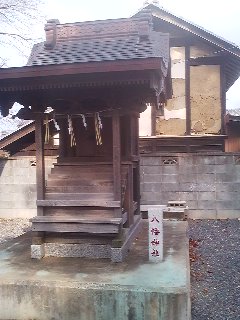 Behind the main hall are several smaller halls. This one is dedicated to Hachiman ( in fact the most popular deity in Japan- a god of victory). 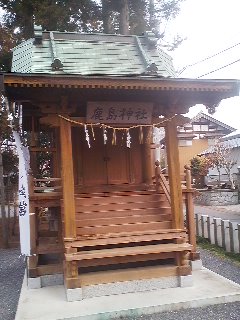 A small Kashima Shrine- dedicated to another god of victory in battle. Kashima Shrines are the most common shrines in Tsukuba City and in past ages represented loyalty to the empire and the emperor 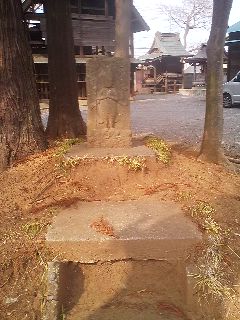 Another unique feature of Karima`s Yasaka Jinja is the presence of this Koshin-zuka.The stone carving is of Shomon Kongo, a deity who was believed to prevent small-pox (making a perfect match, in fact, for the deity of Yasaka- Susanoo-no Mikoto- who also prevent disease. These Koshin Tsuka can be found in almost every old neighborhood in Tsukuba (though usually not on the precincts of shrines) and in the Edo Period represented a popular and interesting custom- staying up all night every 90th day for an evening of prayer, story-telling, eating and drinking (it was believed that if one fell asleep on those nights, a worm that dwells within each and every one of us: the SANSHIN NO MUSHI – would rise up to heaven to report on that person`s sins- and thus shorten their lives. 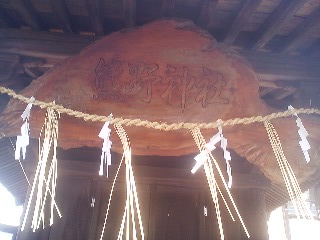 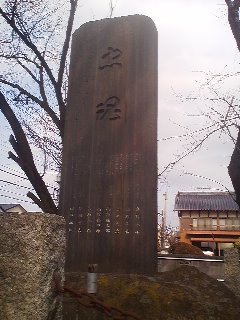 Almost every village shrine or temple has a memorial to the war-dead like this one. The names of local boys who died as soldiers might be inscribed. Inside the shrines hall might be pictures of recruits gathered there to be blessed before being sent off. 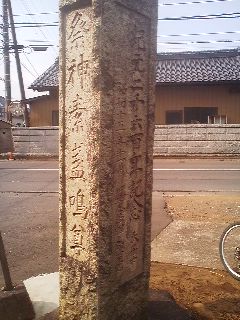 The stone-marker a seen from behind. It reads: Susanoo-no Mikoto is enshrined here. According to shrine lore, however, the god of the Shimo-Kamo Shrine in Kyoto was first enshrined here in 1471 by a retainer of the Oda Family that ruled the Tsukuba area from the early 13th thriugh the late 16th centuries. 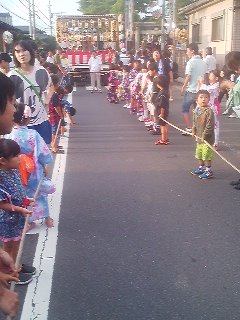 Children pulling a float (DASHI) along. On the float are the festival musicians and dancers. 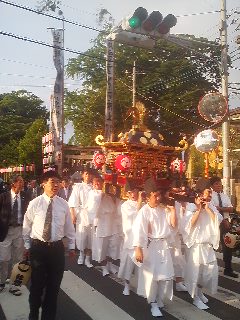 Carrying the OMIKOSHI (portable shrine) through the neighborhood 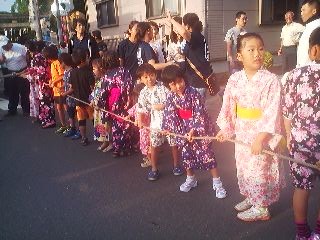 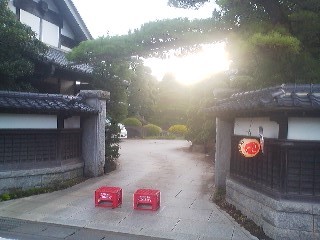 One of the many grand houses that line the road along which the procession moves. These two cartons at the gate of the compound will be used as chairs to view the festivities. Note the festive lantern- there is one at the gate of each UJIKO ( parishioner) 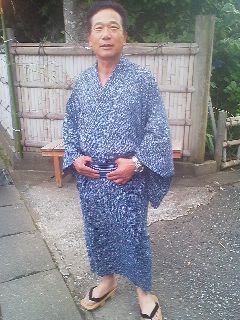 Looking spiffy on the evening of the summer festival