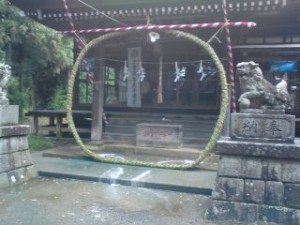 A ring of straw (CHINOWA) set up for Saturday’s rites at the Hie Shrine in Tanaka, Tsukuba ( July 30th)

Has Japan`s summer heat got you beat? Have you got a dose of NATSU-BATEH, the term the Japanese use to describe the lethargy brought on by this season`s Amazon-basin-like temperatures and humidity? Well, these last days of July provide Tsukuba residents this year with at least two TRADITIONAL WAYS of steeling yourselves against the elements until things cool down. First, there was Dohyo no Ushi, the day on which the heat stricken multitudes fortify their bodies with nutritious and succulent eel ( UNAGI). Then, on Tuesday evening ( July 30th, 2019)  there is the spiritual cleansing and revitalization of CHINOWA KUGURI (茅の輪くぐり) which can be had at Tsukuba`s Hie Shrine. There, under the guidance of Dr Osada, the Kanushi (Shinto Priest), you will be able to experience one of Japan`s oldest living traditions, passing through a magical straw ring, as part of the ancient summer purification rites. I wouldn’t pass this chance up if I were you!

Let me tell you a little more about it. 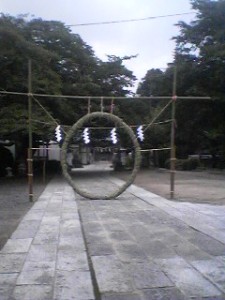 Another straw ring (chinowa), set up at the Mt. Kaba Shrine in Makabe.

Ritual purification has LONG been popular in Japan, and over the centuries, a curious array of occasions has come to be considered appropriate for going to a shrine, or calling a priest to come to you, for harae (祓), or as this character is now more commonly pronounced (O)harai. The birth of a child, the onset of a construction project,the purchase of a car or appliance, turning an unlucky age, or just a plain ol` string of bad luck are among the times at which one might have the kanushi wave his wand and utter incantations (norito) to drive away misfortune and cleanse oneself and one’s possessions of impurities, sin, guilt and any unwanted spirits. Ablutions can also be carried out on one’s own (without calling a priest), with the proper application of salt or water. In addition to these personalized, purification-on-demand ceremonies, there are two great national oharae, one in the winter (toshikoshi no harae) and one in summer (nagoshi no harae) which were decreed by the imperial court in the Nara Period (710-794), in an effort to standardize rituals within the Yamato realm, and have the populace spiritually cleansed every six months. These have been taking place for more than 1000 years, at the end of December and the end of either June or July.

As I have already pointed out (and as you know all too well) summers in Japan tend to sap people’s energy and were also historically a likely time for epidemics to run rampant. For extra purifying and energizing power at the summer harae rites, many shrines around Japan adopted the practice of placing a large ring of reeds (chinowa)across the path leading the the main worship hall, through which those who desired to, could step through, in a ceremony that has come to be called chinowa kuguri. The belief in the efficacy of these rings originates in the ancient Chronicles of Bingo Province (now Okayama Prefecture) in which the simple hero, Somin Shorai, was advised by one of the gods (Susano no mikoto, who somin had been kind to) to protect himself from an epidemic that had been raging, by fashioning a hoop out of reeds and wearing it around his waist. Since this recommendation had come from the mouth of a great god, it was taken for granted that such straw rings had some protective and purifying powers. You might see such rings around the waist of a sumo Grand Champion or see its horizontal reflection in the sumo ring itself.

In Ibaraki Prefecture, there are several shrines at which one can perform chinowa kuguri, though only one of these is in Tsukuba. Hie Shrine (日枝神社）in Tsukuba`s Tanaka district offers a chance to encounter this old custom (called wakuguri by the locals) on July 30th of each year. As a bonus, you will aslo be able to hear a live performance of the local traditional festival music, Tanaka Bayashi, which has been designated by the prefecture as an important intangible property. After the music and  the masked dancing which it later accompanies, rice-cakes will be thrown out to the crowd. Be carefull not to get hit in the face. 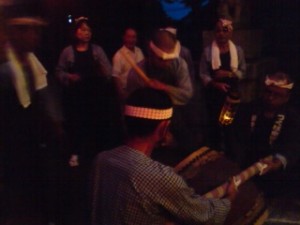 With the heavy, sultry air, the whirring of the cicadas and the colorful yukata clad crowd (almost 100 percent local), this small village festival can give you a glimpse of what a festival was like more than a century ago. When it gets completely dark its like entering a time slip. 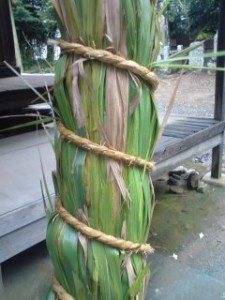 A close-up of the freshly made CHINOWA at the Hie Shrine in Tanaka, Tsukuba

The straw ring  at Hie Shrine will be open for worshipers to pass through from 5:30-8:30 and the music will begin at 7:00. For the ceremony to have full effect, it is the custom at this shrine to walk through and around the ring to the left and then around and through again to trace a figure-eight with your path. Tossing a coin in the votive box would also be appreciated! 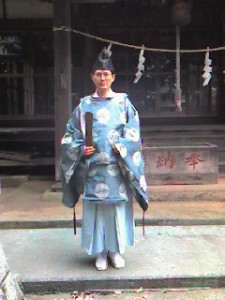 Dr. Osada, the priest of the Hie Shrine in Tanaka, Tsukuba

Pulling off Nishi-Odori just past the Hokubu Kogyo Danchi, into Tanaka, you enter into another world, with huge old houses with imposing gates and majestic trees all around. Upon passing through Hie Shrine’s torii gate, please note the small shrine (Mikazuki Jinja) to your left. Priest Osada, who has also happens to be a dentist, explained to me that inside the tiny sanctuary there are some small stones which can be borrowed, taken home and applied to the body to get rid of bruises, warts and moles. There is a small roughly hewn stone tablet commemorating the time a crew from Fuji TV came to do a story about the stones. Dr. Osada added, with a straight face, that the stones were not 100 percent effective. 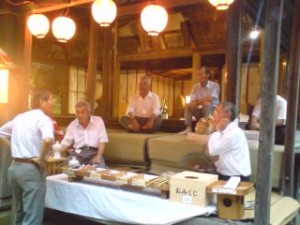 The village elders pour O-Miki (sake) for those who pass through the ring.

A stroll around the shrine`s precincts will reveal a fascinating variety of stone Buddhas (sekibutsu). Dr Osada informed me that except for a memorial tablet for the war dead, just to the right of the main hall, the stones are not worshiped anymore. However, I would recommend you have a look, especially at the tablet just to the right of the war memorial. It is one of the approximately 50 so-called HANA NO OKII NO DAINICHI-SAMA ( large-nosed Dainichi-Nyorai), which can be found throughtout this region. They are distinctive in that the figures carved on them look unusually foreign, with some of them looking not unlike Central American carvings. It is not known who made them. I will be writing in more detail about these sacred stones in the near future. 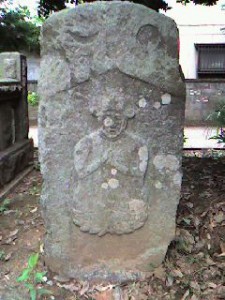 One of this regions mysterious LARGE-NOSED DAI-NICHI SAMAs, on the grounds of the Hie Shrine in Tanaka, Tsukuba 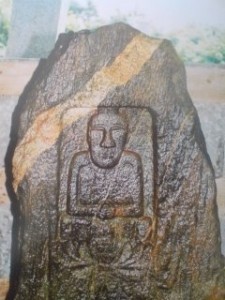 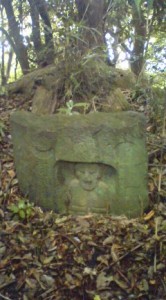 And yet another LARGE-NOSED DAINICHI- this one deep in the woods just near my house.

With summers getting hotter and hotter these traditional midyear customs will probably undergo a revival, as even air-conditioning cannot keep NATSU-BATEH  effectively at bay. Maybe I`ll see you at Hie Shrine on the evening of the 30th. Remember, opportunities like this dont usually ring twice!

I have written more on this topic- specifically the same ritual as performed at the Mt. Kaba Shrine (加波山神社- Kaba-San Jinja), here:

Here are some pictures I took of the scenery around the Hie Shrine in Tanaka: 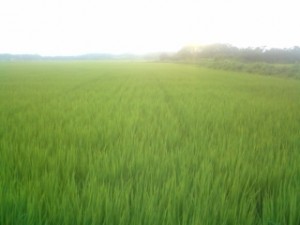 Rice fields (tambo) as seen from the edge of the village 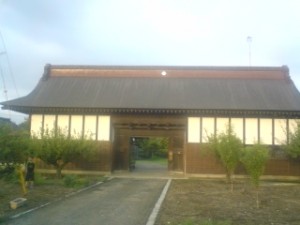 The gate to one of the traditional houses in Tanaka. In this area, large houses with such gates are called MON DACHI NO IE 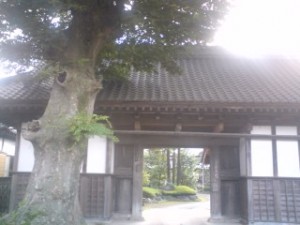 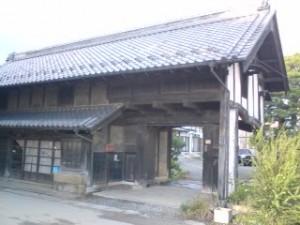