Okinagusa (翁草)- though no longer common in the wild in Japan, the OLD MAN GRASS still strives in gardens and yards 3 July, 2019 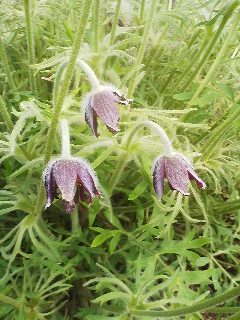 In spring their stems sprout out of the ground and grow about 10 cm high. When  their buds appear these stems droop over, and when their unusual BROWN flowers open up, they face sideways or downwards. This bent over posture, along with the fact that the stems and flowers come to be covered in a silver fuzz, is why the most commonly used Japanese name for this flower (among several regional variations) has been OKINAGUSA(翁草), which translated character by character  comes to mean VENERABLE OLD MAN GRASS, in English (while the scientific name- pulsatilla cernus- derives from the Latin: pulso- to ring out, which must derives from the flowers bell-like shape). 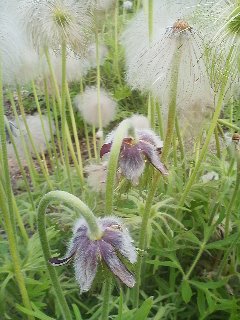 OKINAGUSA- when the flowers fall away ( what you see are not petals but calyces!) long and fuzzy seeds stand out like dandelion seed heads gone wild 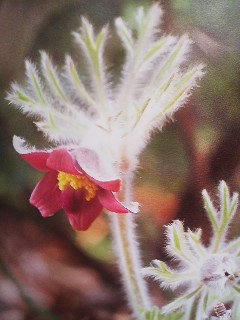 A better view of the silver fuzz

Besides being covered in white fuzz and their flowers being brown, these plants have two other interesting features. First, they have no petals, only sepals (the most outer part of flowers- something like the  shell of the opened bud- called a calyx). And then when each brown sepal has fallen away, long and fuzzy seeds remain behind  creating  large, round, frizzy orbs- looking something like super-sized dandelion seed heads (lots of fun for kids!) 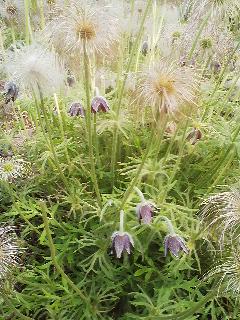 OKINAGUSA- the leaves, the flowers, and the seeds

These plants had long been a common feature of Japanese spring (in all the main islands except Hokkaido) growing in well sunned meadows in hilly areas and along river banks. Sadly, however, in recent decades they have become very rare in their natural habitats. No one is sure why-various environmental changes, over development, OVER PICKING, the lack of ability to compete with numerous invasive species, – or a combination of all these. Whatever the reason, OKINAGUSA are now listed in the enviromental Red Book as a vulnerable species.. 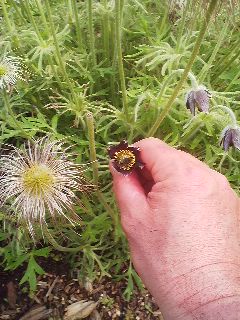 And though you will probably not find this interesting plant in the wild anymore, they seem to be doing very well (and are very popular) at Japan`s botanical gardens (including Tsukuba`s- check out those that are thriving in the clematis section) and in the gardens (or planter pots) of Japanese homes as well. 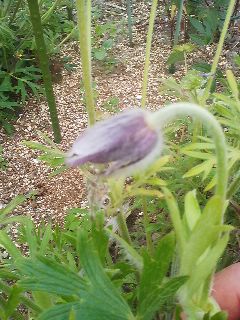 As with most other popular native flower species, there are MANY different local ways of referring to the plant now referred to in Standard Japanese as OKINAGUSA (see an extensive list of the different names here):

Interestingly, the dialect names for this flower used in the Tsukuba area indicate that it white fuzz suggested not age- but BABY FUZZ or a calligraphy brush: FUDEKUSA (writing brush grass), in the Yasato area, and KARAICHIGO, which derives from KAWARA OCHIGO (河原お稚児)- meaning: riverside babies. 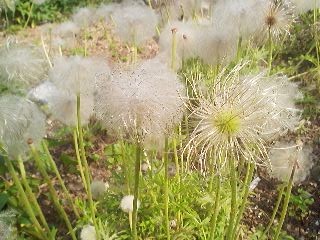 And because in some parts of Kagoshima Prefecture this flower is called ONEKOGUSA or variations of this name, some scholar believe that a flower- NETSUKO GUSA- mentioned in one poem in the MANYOSHU ( compiled in the 8th century- the earliest collection of Japanese poems), is none other than OKINAGUSA.

whose general gist is: If I had never come along to meet you, I would never have come to love you…….

…..though these scholars could, of course, very well be wrong about the NETSUKOGUSA of the poem being todays OKINAGUSA. Anyway, since the poem makes no symbolic use of the way pulsatilla cernua looks like a very elderly gentleman or of any of its other features, it does not seem to me to be an interesting poem about that plant. 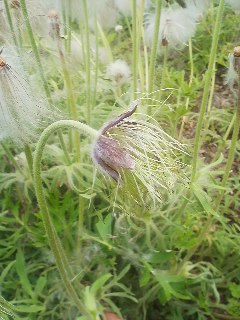 It goes without saying that there are many haiku poems using OKINAGUSA as a kigo keyword for spring and which use its bent over shape and silver haired look symbolically (translations forthcoming).

And then there are just some works which express the JOY of encountering these unusual flora in the wild:

But still, irrespetive of what we call this plant or what we think it might symbolize in a poem, it would be nice to come across it some day while hiking someday- as opposed to seeing it at the Botanical Garden.

If YOU happen to find some wild OKINAGUSA, be sure to let me know- and send dome pics! 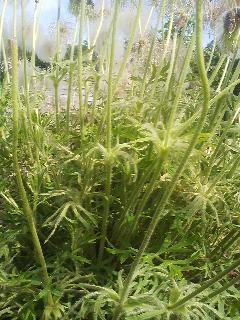 OKINAGUSA- the leaves and stems 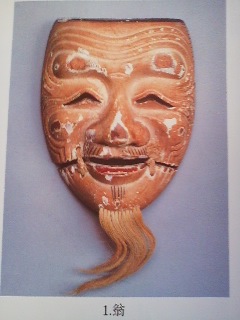