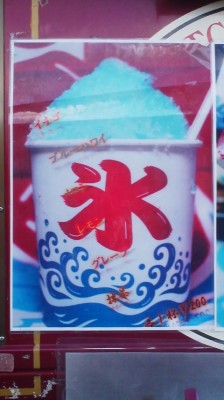 Just in case you happen to have the misfortune of finding yourself  out in the oppressive heat of a Japanese summer day, there is one Japanese character that you should remember- and be on the lookout for on the many banners and signs which bear it:  氷  (KO-RI)- which means ICE.

Now, in the U.S. where I grew up, an advertisement for ice means that bags of ICE CUBES are available for chilling drinks and cocktails.

In Japan, however, the character for ICE on an advertisement banner, sign, or menu,  usually means that KAKI GO-RI: SHAVED ICE- is on sale-   served covered with colorful, flavoured syrups and maybe with some sweet and creamy condensed milk, or  a variety of other toppings.

Usually it is the KAKI GO-RI stands which have the longest lines at Japanese summer festivals (NATSU MATSURI). The shaved ice served at such events is sometimes roughly ground (instead of delicately shaved), and has to be crunched (which can be fun in itself- who doesnt love to chew ice, especially on a scorchingly hot day!), and the syrups- red (strawberry) , green (melon), yellow (lemon) and blue (Blue Hawaii???) tend to blend unevenly with the ice (concentrating on the bottom of the cup). It can also be challenging, and slow going, eating your cupful of ice with the special straw you are given- one with one end opened out like a spoon!

Still there can`t be anything that you`d much rather be holding in your hands (besides a cold beer, of course) at a steamy Japanese summer matsuri! (Though you have to always be careful to eat slowly in order to avoid painful bouts of BRAIN FREEZE!)

It was interesting that when talking to Japanese friends about their Kaki Go-ri memories, many pointed out that red (strawberry) was for girls, and blue for boys.One man now in his forties told me how as a kid he had always wanted RED but had been too embarrarassed to ever order that color. 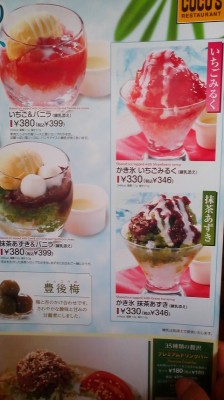 For much more sophisticated versions of the same treat, you should sample some of the KAKI GO-RIs available at a so-called Japanese family restaurant ( chains like Cocos, Gusto, and Denny`s, for example).

Here the ice is more finely shaved. It is light and airy and melts in the mouth. The toppings and syrups are of a higher quality and portions bigger and more beautifully presented.

I would recommend to anyone wanting to try a more classical JAPANESE taste in their shaved ice to order an UJI KINTOKI (宇治金時), which has a topping of green tea syrup and a dollop of sweet azuki beans. At some retaurants this flavor is called MACHA ADZUKI.

The only problem with ordering shaved ice at one of these family restaurants is that after you start eating , you actually start to get chilled- because of the strong air-conditioning

(I have always wondered why Japanese restaurants and buses are not kept at normal temperatures ALL YEAR ROUND instead of being over-cooled in summers- chilly for those in t-shirts- and over heated in winters- too hot for those in sweaters!) 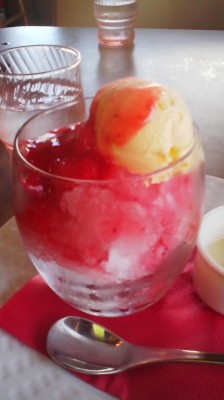 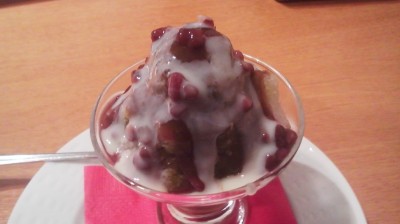 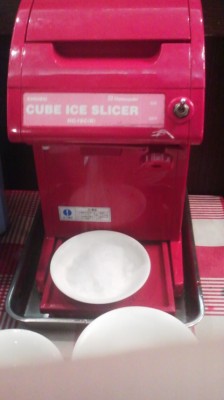 Make your own KAKI GORI at Shakey`s in Tsukuba with this ice shaving machine! 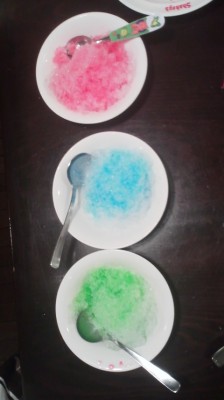 Make it yourself KAKI GORI at Shakey`s in Tsukuba

The Long History of Eating Ice in Japan

The Japanese aristocracy has long enjoyed eating (and holding!) ice in summer. Sei Shonagon, who wrote the Pillow Book (in the early 11th century) writes of how a dish of shaved ice with some sweet syrup was one of her favorite things. And besides also containing references to ice being served as a refeshment, there is a memorable ( and quite erotic) scene in the Tale of Genji ( Genji Monogatari)- which is considered by many to be the world`s first true novel (also from the early 11th century)- of the Empress`s ladies-in-waiting fondling ice and rubbing it on their bodies to keep themselves cool in summer.

Besides being special summer treats, the stored ice was also apparently used in certain court ceremonies and for divination.

The fact is that having ice for summer was considered very important by the Imperial Court ( something which like so much else was an influence from China). Special underground chambers lined with thatch for preserving ice through the summer (HIMURO, 氷室) were established and managed by agencies of the Imperial Court, and later particular families- especially the priests of the Kamo Jinja Shrines ( in what is now Kyoto). The ice houses built by the Emperor Nintoku are even mentioned in Japan`s second oldest extant text- the Nihon Shoki (720).

Records from the Heian Period ( in a book called the Engi Shiki,of 927 AD) show that there were 21 officially run HIMURO near the capital and 540 other places referred to as ICE PONDS (氷池), which were the places where the ice was actually gathered for storing.

In Nara Prefecture, you can visit a shrine which is at the supposed site of  the oldest ice house (himuro) in Japan. It is called the Himuro Jinja Shrine and it is dedicated, as you can well imagine, to the Ice Deity. Its festival, held on May 1st,  involves a pillar of ice and it is attended by anyone who means anything in the Japanese ice and refrigeration industry. See more here:

The Shoguns, the warlords who for much of Japanese history were the actual rulers of the country,, would not be outdone when it came to having access to ice in summer. They too established their HIMURO. Interestingly, while all the hundreds of local rulers (daimyo) would send various annual gifts  to the Shogun in Edo during the period of Tokugawa Family rule (1600-1868) , the richest clan in all of Japan (  the Maeda Family in what is today`s Ishikawa Prefecture) would send a large supply ice, each year on the first day of the 6th month according to the old calendar ( which would usually be sometime in early July) ! So I guess it could be said that ice was considered the most extravagant of all gifts at that time.

Still, during the later Edo Period, the first above-ground stone ice-houses were built. Though ice was still something for the most upper-levels of society, ice did become available for cooling the water on sale at MIZU YA (水屋)- the shops or vendors which sold water in the parts of Edo where there was no good drinking water readilly available. The water sold by the MIZU YA was apparently river water cooled with ice. Not very hygienic in a huge city like Edo during its steamy hot summers.

(Many, especially the elderly, got some sort of food poisoning from drinking this chilled water and that is probably the origin of the common Japanese saying: TOSHI YORI NO HIYA MIZU (年寄りの冷や水)- which literally means- COLD WATER FOR THE ELDERLY, but is used when an old person does something dangerous by not considering his/her age.)

There was also a custom among the Edo townsfolk to eat rice cakes which they had frozen and stored during winter. This took place on the first day of the 6th month ( now sometime in July) and was called Ko-ri no Tsuitachi (氷の一日).

One interesting  late Edo Period text, by the writer Santo Kyozan (山東京山) contains an amusing description of an encounter with ice served as a treat during the summer, up in the moutains of Echigo (now Niigata Prefecture), in the town of Yuzawa.  Knocked out by the heat, the writer and his son dropped into a tea shop. They were served something which much to their surprise was a bit of snow or ice topped with some soy bean powder (kinako). The proprietor told them that even in summer there were certain valleys in which ice or snow could be HARVESTED all through the summer.

It was not until after the fall of the Shogunate and the disolution of the old imperial ice keeping system (sometime after 1868) that the custom of eating shaved ice took hold among the people.

The first Japanese ice company was established in Tokyo in 1888.

The first ice treats consisted of chipped ice in water, but soon someone had the idea of using a planer ( a tool used for shaving wood) to shave ice which would be sweetened with sweet syrups.

The original shaving planers were eventually replaced by hand cranked machined ( many of them very beautiful) designed especially for making Kaki go-ri. Many elderly people who had shared their childhood memories with me have mentioned how the loud sound these machines made was  an important part of their childhood soundscapes. The crushing and grinding itelf would bring about a feeling of cool relief.

While Japanese food culture has started to take the world by storm in recent years ( back in New York there seems to be a Japanese restaurant on every corner now- and there is sushi at Yankee Stadium!) back in the late 19th century the greatest impact the Japanese had on world food culture was in the Hawaiian Islands. Japanese immigrants, many of them plantation workers, took with them from Japan the idea of shaving blocks of ice and then adding some toppings. I have read in some histories that in the early days in Hawaii the shaving was done by some with their old family swords- though this must surely be a legend! They must have used their machetes!

A few enterprising Japanese American businessmen began to sell these refreshing and beautiful treats from their grocery stores.

To this day, shaved ice or shave ice has remained THE most iconic food image of Hawaii`s North-Shore, and a stop at Matsumoto`s for a Rainbow Shaved Ice is a MUST for anyone visiting that part of the world. 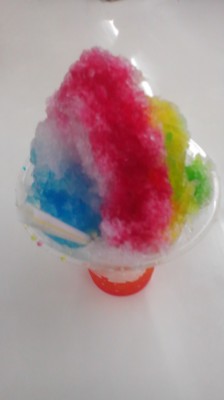