For lovers of traditional Japanese culture, photographers looking for the perfect shot, or anyone who enjoys getting caught in the middle of a huge crowd surging dangerously with unbridled passion, there was no other place to be last weekend than Asakusa, where the Sanja Matsuri (三社祭) was held. It is on the 3rd Friday, Saturday, and Sunday of May that every year the descendants of the old Edo Townspeople put on their colorful festival wear and throw off all their inhibitions as they join local gangs of yakuza and troups of geisha to put on what is probably the biggest block party and the most exciting rave in the world. 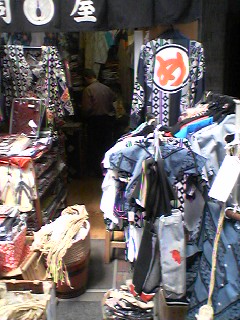 My first Sanja encounter, years ago,I was a little hesitant about going. I had heard it announced that the climactic portion of the festival, Sunday evening’s wild procession of the three huge and ornately decorated omikoshi (お神輿),or portable shrines, would be cancelled. This was said to be because during last year’s revelry, certain yakuza members had disobeyed direct police orders and climbed on top of the sacred palanquins proudly displaying their full-body tattoos. It was emphasized that not only did this constitute civil disobedience, but was also by having exposed buttocks on top of the vehicle of the Gods, highly sacrilegious. 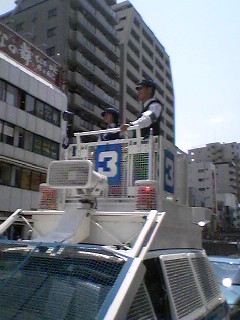 A Sanja Matsuri without its famed finale did not seem very attractive to me. The only thing that gave me the impetus to get up early on Sunday morning was the TX, which has made getting to the festival so fast and convenient.

I was surprised to find that the train line itself (quite new at the time!) had already become connected with the famed and ancient festival, with groups of participants, already tipsy at 9am, boarding the train at Kita-Seju station and using the TX Asakusa Station as their changing room. 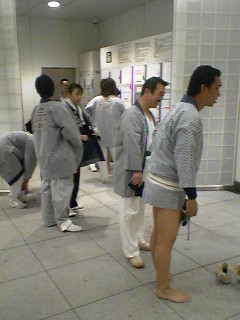 The police were certainly intent on keeping order and had actually set up observation posts with video cameras to record any possible violations. Just next to one of these police posts, a group of yakuza had gathered, dressed according to their rank. The boss’s wife was dressed in a festival coat (hapi) which still revealed at the nape of her neck, her full-body tattoo. I heard the boss greet his men, warming them to cause no trouble this year. I guess the other bosses urged the same, as this year’s bacchanalia was not as raucous as in past years. 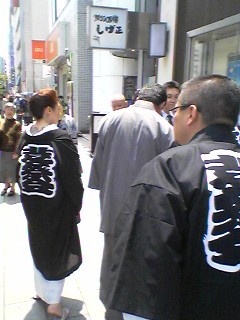 Instead I tried to observe little details which I will write about in future entries. One interesting thing I did learn, I would like to mention now. I was wondering why almost no people who lived in apartments with balconies facing the festivities were watching from above. I was thinking about maybe asking someone to let me take pictures from their balcony. 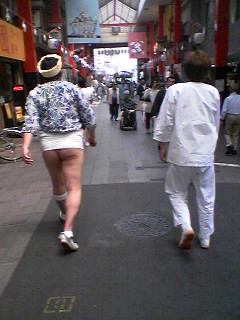 By asking, I learned that since the Gods were supposed to be riding the omikoshi, it would be disrespectful or even sacrilegious to look down on them from above.

Since that year, Sanja Matsuri has been back to normal – and more popular than ever.

If you can`t make it, though, there is always my favorite festival, which is held nearer to Tsukuba (though more difficult to access (you have to go to Tsuchiura first and get on the Joban Line): the 3 day Ishioka Festival which takes place in September. I will tell you more about it before then.