Ibaraki Prefecture is Japan`s No. 1 Melon Producer – try some of the unique varieties and melon based snacks! 31 May, 2019 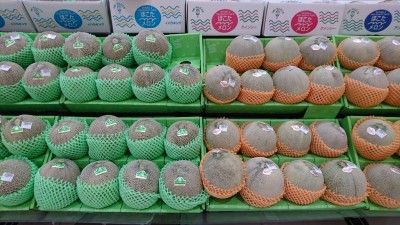 It`s the end of May  and this year`s melons are already in!

Something that leaves an indelible impression on anyone who visits Japan is the sight of a beautifully boxed 200 dollar (or more) melon at a gourmet fruit store or department store in Tokyo. For people like me who grew up eating melon almost every night (as an appetizer*), it is hard to imagine paying so much for a single fruit – of any variety. What you have have to understand, though, is that since the late 18th century, melons have been considered a treat of the highest rank. Since Japan`s hot, humid and rainy climate is not conducive to growing it, special greenhouses were imported so that musk melons could be produced for the imperial family. The great Zaibatsu magnates (the Sumitomos, the Mitsuis, the Mitsubishis, and the Yasudas) followed suit, having their own greenhouses built to keep themselves supplied with the soft, juicy and fragrant fruit.

Interestingly, Japan`s elite class appreciated melon not only for their taste, texture or aroma- they enjoyed the beauty of the patterns on the outside of the rind (Japanese call melons with such patterns “net-melons”). Something else uniquely enjoyed by the Japanese later when high-quality melon became affordable for the general public as a luxury gift item was the two-pronged stem that was left attached to the fruit after removing it from the vine (see the photo in the photo below). This reminded them of the CHONMAGE, the hairstyle worn by samurai of the Edo Period or the pincers of a stag beetle (which are also prized in Japan in this season) 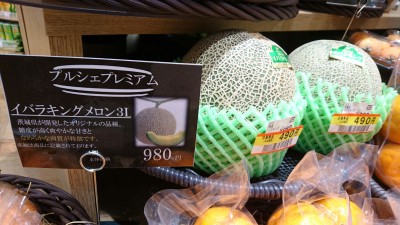 Even as the years passed ans the greenhouses and vinyl tunnels needed for growing melons in this country became more affordable melons still kept their image as an “elite” fruit – and it really DID require an inordinate amount of care. Something else that can explain the prices of the most expensive melons is that they are the fruits of the first flowerings of each vine – and are said to be by far more delicious than the fruit born on the same vine after them. Another thing that foreigners might not understand is that those most expensive of melons are not meant to be consumed by the buyer – they gifts… very special gifts – fit for an emperor, you could say! 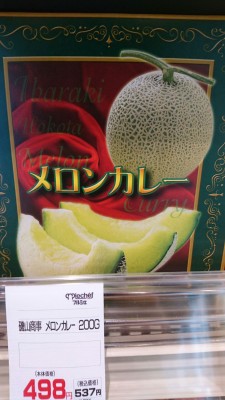 A packet of melon curry ! What will they think of next?

By mid-20th century more prosaic melons had become become cheap enough in Japan to be consumed on occasion by the common folk – though they remained relatively expensive (and  certain melons continue to be sold for insane prices of millions of yen!). Japan is a country of  great plant breeders. This is evident in the amazing array of cultivars now available for many fruits – including melons. In the early 1960`s, JA Ibaraki, the local branch of Japan`s agricultural cooperative decided that the narrow strip of land between Lake Kitaura (which is connected to Lake Kasumigaura) and the Pacific Ocean (Hokota City), would be the perfect place to grow melons – and they actively promoted their idea. As a result Ibaraki Prefecture was eventually able to capture the coveted title of No. 1 melon producer in Japan – a position it has held for the past 17 years. 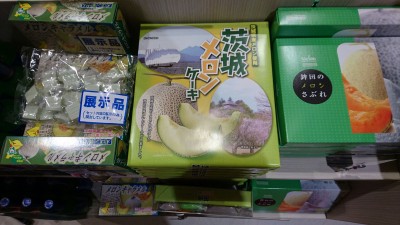 Something to give friends or family after a visit to Ibaraki Prefecture – how about some melon cookies or chewies?

That`s why towards the end of June you will your neighborhood supermarket and green-grocer (in Tsukuba) jam packed with boxes of melons of different varieties. One highly acclaimed new cultivar is the Ibara-king (who comes up with these names?) and you can get your hands on one for about 500 yen. Since Japanese food companies are endlessly creative, you will also find a wide range of processed sweets – marketed as gifts (OMIAGE) from Ibaraki. I even found a packet of melon curry?? on sale at my neighborhood supermarket. Get into the season – and support our local farmers. Buy a few melon varieites and try them out. Then write to me and let let me know which ones you like best – I can`t afford to do a wide-ranging taste-test myself! 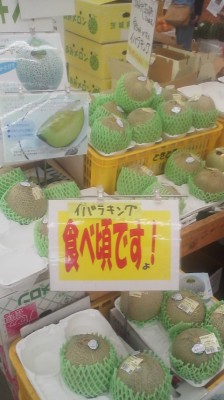 The sign at this food cooperative in Kukizaki, Tsukuba, reads – In Season now! 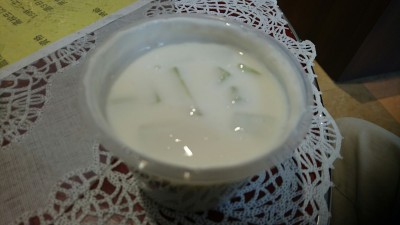 In keeping with the season I order this month`s special – melon yoghurt, from the yoghurt counter at the Prechef Supermarket, Lala Garden, Tsukuba

* Back when I was a kid in New York, a slice of melon would be sitting at each person`s table setting as we sat down for dinner. We had two types – the orange canteloupe and the green honeydew. Japanese friends and acquaintances are always surprised to hear this not only because we had melon so frequently, but that we had it as an appetizer (if it wasn`t melon, it was grapefruit!). In Japan melon in considered a dessert – of the highest class!