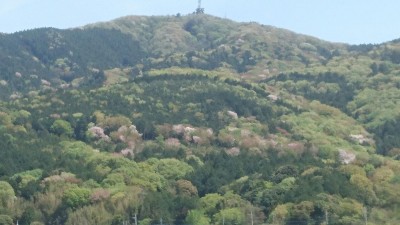 Mt. Hokkyo zan (formerly known as Oda Yama) is 461 meters high and the second highest mountain in our city after Mt> Tsukuba – and a very popular hiking destination for local residents. You can see the communications towers on top, but when you get get up there you will find the 800 year old Kamakura Period Buddhist monument called a Ho-kyo-in-to, from which the mountain`s current name derives. In late April the lower stages of the mountain glow a misty pink as the YAMAZAKURA bloom

I had already had my fill of cherry-blossoms this spring – I had enjoyed them from way up close and from afar. I walked among the throngs of ribald blossom-revellers ( both Japanese and non-Japanese) in Ueno Park in Tokyo, picniced under trees in full bloom in the morning, afternnoon, and most impressively at night – at various cherry-blossom spots around Tsukuba. I enjoyed them with friends, family and strangers – I even got myself soak in order to experience “rainy cherries” – and I had had enough, almost glad the petals of Tsukuba`s low-land sakura trees (almost exclusively of the Somei Yoshino variety) had all fallen away and scattered in the wind. 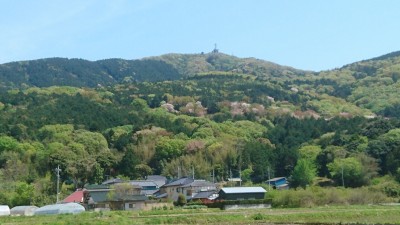 The rustic hamlet of Yamaguchi, Tsukuba, nestled among the low hill that surround it provide a unique setting in FLAT Tsukuba – though a quite familiar one to those who come from most other parts of MOUNTAINOUS Japan.

But then yesterday, Friday April 22nd, I had to be in Yamaguchi, one of the more secluded neighborhoods in Tsukuba – and when I got there I had what might have been my most moving SAKURA experience. Yamaguchi is quite unique in Tsukuba – in that it is surrounded by low-mountains – most prominently  Mt. Ho-kyo-zan (formerly known as Mt. Oda-san)- and they were all glowing a faint, pulsating pink that was reflected in the freshly flooded paddy fields.

Creating the kind of atmosphere that was appreciated by the Japanese of the Heian Period, more than a thousand tears ago – long before the popular SOMEI YOSHINO variety of cherry was developed and planted in parks and on the roadside. 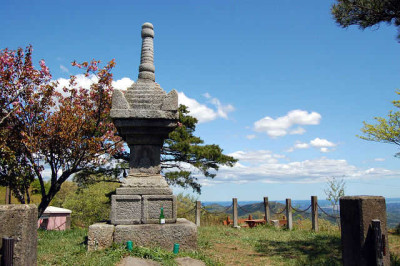 The Ho-kyo In To monument (pagoda) on top of Mt. Ho-kyo- is believe to have been set there sometime during the Kamakura Period (1185-1333). Such pagodas originally contained the text of the Dharani Sutra (Ho-kyo-in) inside them. It was believed that praying in front of it would cleanse the worshipper of sins and provide protection from calamity. This is one of Tsukuba`s most important cultural artifacts.

Japan is a mountainous country  – and the earliest capitals of Japan – and most of its cities were built in basins (BONCHI) – surrounded by mountains. Many nw residents in Tsukuba who have come here from other part of Japan have told me that living here they miss the moutains.Well, those people would feel right at home in Yamaguchi, Tsukuba, just east of the Hojo Oike Pond. 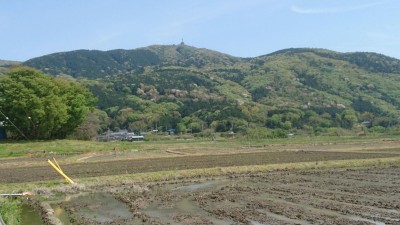 If you feel like entering a different world while staying within the same city, you might like to head out to that neighborhood and spend the day exploring – and this weekend you`ll have the spring flowers bursting in bloom, the constant singing of the bush warblers – and the lower stages of the mountains glowing cherry-blossom color.

It would be a perfect way to celebrate spring. 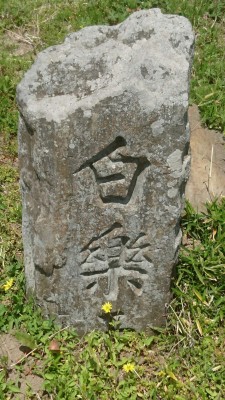 A mysterious sacred stone that reads : HAKU RAKU (白楽) – I have never seen such an inscription like this before – and still have no idea what it signifies. And it shows once again that after all the years of exploring there are still amazing discoveries to be made.