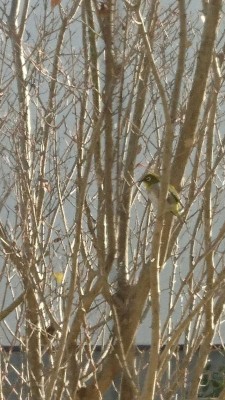 And then a moment later pecking at a piece of white bread I`d tossed out to him ! He must have been mighty hungry landing on the ground (where mejiro are rarely seen) for bread (after thd autumn persimons have disappeared and before the nectar-filled plum blossoms bloom these birds live off the nectar of camelia sazanqa). After this first encounter I made sure to leave some fruit out for them (they always move about in pairs!)

It`s been mighty cold this winter, and like most other people living in Tsukuba we don`t have central heating. That means getting up out of bed in the mornings can be something of an ordeal. What we`ve been doing everyday to keep our minds off the frosty indoor conditions till the heater kicks in  is  watching the wild birds that come to feed on the food we put out for them. It`s been a big hit with my family (though if there were no kids around I could think of some better ways of warming up in the mornings!) Especially exciting was waking up after the big snowfall we had and watching as little puffed up balls of life appeared here and there from out of the  white stillness to get at the fruit and bread we put out for them. Even children, I realized have a parental instinct, feeling delight when giving nourshment and succour to tiny creatures in need. 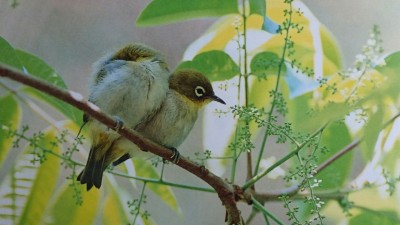 The most surprising visitors we`ve been having this winter are the MEJIRO (zosterops japonicus). They`ve been coming every day as a pair since the snow fall we had – with one bird feeding as the other stands guard before they change places. Easily recognizable (unmistakable, in fact) with their dull green plummage and distinctive white rings around their eyes, these tiny birds (smaller than sparrows) have been keeping our hearts warm all bitter winter long.

Some of you might be surprised by the fact that I found the mejiro`s presence in our back-yard so surprising. I mean it is not an an endangered species and field guides tell us that it is present throughout the Japanese archipelago* and beyond – ranging from Sakhalin Island in the north down to the Philippines and Vietnam in the south. It is also present Korea and China. 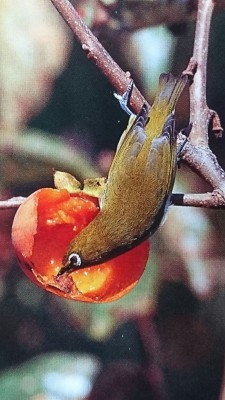 Mejiro eating a persimon off the tree

Well, the fact is that I had NEVER had a mejiro (appropriately called the Japanese white-eye, in English) come to my yard before in any of the three locations that I have live in in Tsukuba thus far.

When I thought about it, I realized what the reason for them never having come to feed in my yard in past years was. They never had to. Tsukuba is full of camellia sazanqa  a flower that blooms thoughout the winter and whose nectar the Mejiro love to suck. The trouble is though, that hundreds (thousands?) of camelia sazanqa bushes that grew along the Tsuchiura-Gakuen Road have been recently cut down! In other words, the mejiro have lost the winter food source that has helped them thrive in this area.

That`s why they`ve been coming to my yard and even eating bread off the ground (mejiro rarely go down to the ground according to the various field-guides I`ve checked. 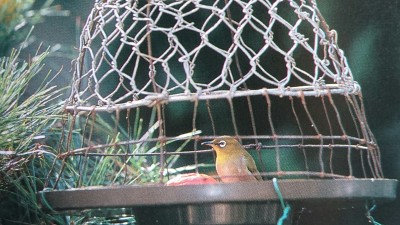 Onr problem that has developed in my backyard over the past few days is competition between the various birds – or should I say the bulbuls (hiyodori) and every other species.

The bulbuls are very territorial and have started to chase any other birds away from the food. The best solution to the problem has been to put some fruit under wire mesh with eyes that the mejior can fit through and the bulbuls can`t!

Mejiro love fruit – mikan or persimons seem to be their favorite. And if you put some juice out in a bowl, they`ll drink it right up! 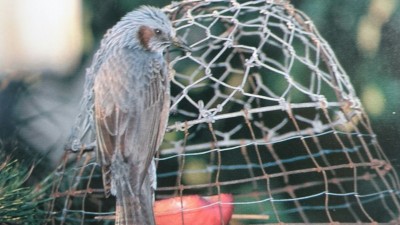 … will help them feed comfortably where the bulbuls (hiyodori) can`t get to them!

* The mejiro might be common now but that’s not the way it was 30 years ago when the population in the wild was dropping rapidly. This was due primarily to its popularity as a song-bird. Trappers, both professional and amateur, caught them in nets to be kept in cages. I remember ( I could never forget) one of my friends telling me how as a boy in Nagasaki Prefecture, he used to catch mejiro by putting some sort of sticky substance on the branches of fruit trees. Thankfully Japan has made trapping song-birds (and even holding singing contests with them ) illegal.