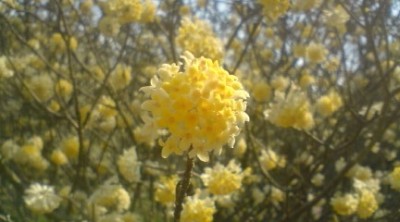 The blossoms of the MITSUMATA tree blooming in Tsukuba

“Money doesn`t grow on trees”. For generations, English speaking parents have turned to this trusty old proverb in an effort to fend off  requests from their children to BUY THEM SOMETHING, or to drive home the hard fact that (for most of us) making a living requires making an effort.

There have always been, of course, certain kids- SMART ALECS, who talk back to their parents after hearing this expression pronounced- usually by quipping: But money DOES grow on trees- its made of paper, insn`t ?. Paper is made from trees !

The fact is, however, that paper money is NOT regular paper ! Anybody who has had their bills get soaking wet or has left them in  the pocket of  a pair of pants which has been put in the washing machine has seen that for him/herself. Usual paper falls apart in water.- paper money does not.

The reason for this is that paper currency has usually been made with special blends of materials such as cotton and linen. And more recently (since 1983, to be exact), plastic banknotes have also  come into use in various countries.

So you see: MONEY REALLY DOESN`T GROW ON TREES………….except for the Japanese Yen, that is!

For more than 100 years, Japan`s banknotes, considered by many to be of the highest quality in the world, have been make from the bark of the MITSUMATA tree-  which besides its use in money making is popular ornamental tree (commonly seen blooming in March and April). 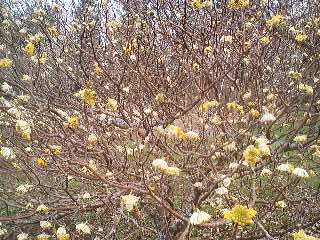 A MITSUMATA tree in bloom (Tsukuba)

When Japan first considered what material  should used to produce its paper currency, it was only natural that trees were considered first. The Japanese had long been producing extremely high quality paper ( called WASHI) from the barks of certain trees, namely- KOHZO ( 楮)  , GANPI (雁皮）  , and MITSUMATA ( 三椏 ).

The fibers of the KOHZO, which is what is most commonly used to make Japan`s beautiful WASHI paper, were too long and stiff. So Ganpi was considered. The authorites found ,however, that this tree would be too difficult to cultivate on the grand scale that use as the materai for making the national currency would require>

It turned out, that the bark of the MITSUMATA tree could be used to produce just the right texture of paper- nd the trees could be cultivated on huge scale quite easily ( now most of the MITSUMATA grown for making money comes from six prefectures in Western Japan: Shimane, Yamaguchi, Tokushima, Kochi, Ehime, and Okayama).

In 1879, production began, and MITSUMATA has been used ever since! 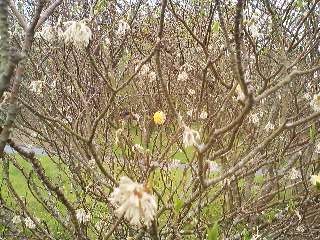 While the outer blossoms have nearly faded away, the inner blossoms, which bloom later, still look fresh

The MITSUMATA tree (Edgeworthia chrysantha) is originally from South China, and no one is quite sure just exactly it was introduced to Japan (some scholars suggest that it had come to Japan at least 1,300 years ago).

It is certain, however, that MITSUMATA was used to produce exclusive, high quality, official paper in 1598. It was in that year that, according to the very useful book: USEFUL TREES of JAPAN (Itoh,Sano,Abe,Utsumi, and Yamaguchi), the Shogun gave exclusive permission to a paper maker at the Shuzenji Temple on the Izu Peninsula, to cut MITSUMATA for WASHI making. 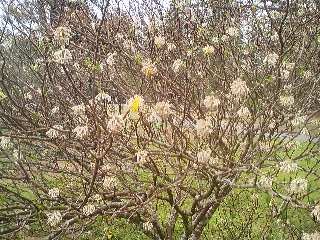 A MITUMATA TREE in spring

With blossoms that are quite interesting (in yellow, orange, or purple) the MITSUMATA, as I have already mentioned, is commonly cultivated as an ornamental tree. interesting characteristics of the tree are that all its branches grow out into three legs at their tips ( the name MITSUMATA means three-legged) and that the blossoms grow on the outermost tips first, and then gradually blossoms appear deeper into the tree ( that is why in late April you can find fresh blossoms deep into the tree with faded ones on the outer tips).

In Tsukuba, besides the botanical garden, you can find MITSUMATA growing in just about every old neighborhood.

For more on the book USEFUL TREES OF JAPAN, see many article:

and for those of you who are interested, I have found on UTUBE that some people have created videos using the music of long time Tsukuba Band, The TenGooz (performing songs with melodies and lyrics by yours truly). You can check out a couple here: