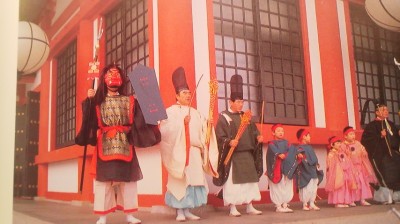 Getting ready to ritually drive away demons on SETSUBUN

Most of the world cultures that I can think of have (or had) their own special ways of keeping evil spirits at bay, or even better, far away. Japan is probably the industrialized country with its traditional demon-fighting repertoire most intact. One of the most important and popular of the occasions on which exorcisms are appropriate is SETSUBUN (節分) usually celebrated on February 3rd, the day before the first day of spring (risshun, 立春). The main technique used is bean-throwing (豆まき）, highly effective and plenty of fun! 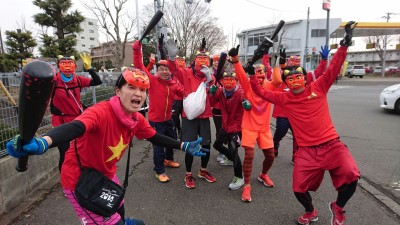 Cycling home on February 3, 2018 (at around noon) I ran into this jogging band of Setsubun demons celebrating the season. I only had time to snap this pic before the light changed and they were off …. 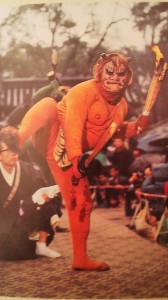 Dressed up as a demon for SETSUBUN!

Usually, Dad wears a demon (oni) mask, easily purchased at any convenience store, and the kids proceed to pelt him with dried soy beans (from packets available at the same stores). While they do this, they shout “Oni wa soto! Fuku wa uchi!” (Evil out, Good Fortune in!). This is done at the entrance to the house, and then in the other rooms. When the beans are all used up, they are gathered up and each family member usually eats the same number of beans as his/her age. Beans can also be offered to the Shinto and Buddhist altars.

This ceremony remains one of the most popular of the traditional evil fighting customs and you can enjoy the ceremony in various forms at temples and shrines throughout Japan as well as on TV. (You might catch a scene of sumo wrestlers in masks being pelted by excited kids.)

One of the other techniques for keeping evil away in this season has not fared as well as the bean throwing. I’m referring to  YAIKAGASHI, the holly （ hiiragi ヒイラギ） and dried sardine amulets which in not very former times would adorn the entranceways of most houses in this area ( and still do in the old town of Hojo where I live- in fact they can be seen at door posts ALL YEAR ROUND in my neighborhood where New Year`s buckwheat noodles- TOSHIKOSHI SOBA- are eaten at on the day of the festival- because until 1873 when the Japanese calendar was changed New Year`s coincided with Setsubun!).

Traditionally the YAIKAGASHI could also contain garlic or welsh onions ( negi) or even some singed strands of human hair!

Since holly has thorned leaves, it was thought to repel demons who were afraid to get poked in the eye, and the sardines would do the same job with their unpleasant, fishy smell. Though the use of these amulets has decreased rapidly over recent years, MANY can be found around town- especially in Tsukuba`s older neighborhoods.

I’ve also taken some pictures of SANPO, containers for soy beans made out of origami paper by nursery school kids.

Another way to celebrate SETSUBUN (or desecrate it by joining in on its commercialization) is to buy the EHO-MAKI (恵方巻き） sushi rolls which are being sold at all the convenience stores and being promoted as efficacious for bringing good fortune by pointing the roll in the properly auspicious directions.

So, there you have it. Take YOUR choice of how you want to keep EVIL away! 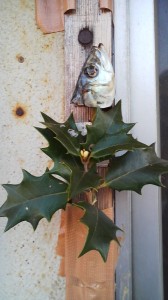 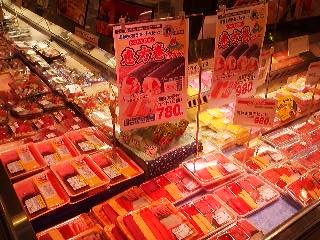 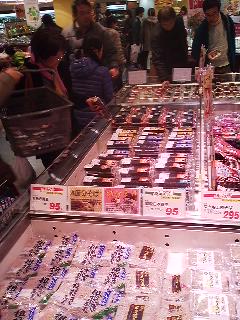 The power of advertizing! Brisk sales at one the three different special counters of a supermarket selling Eho-Maki, which were all but unknown just a few years ago 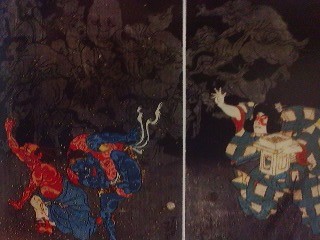 An Edo Period print showing demon being repelled by a bean throwing Momo Taro (Peach Boy)- for the ancient Japanese (as influenced by China), the wood of the peach tree was effective in driving off evil. In fact, the precursor of today`s custom of throwing bean, there was a ceremony called the TSUINA in which a reed arrow was fired from a peach wood bow in order to drive away evil forces 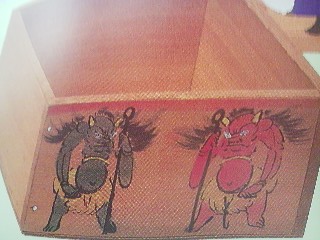 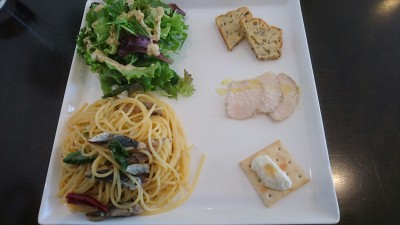