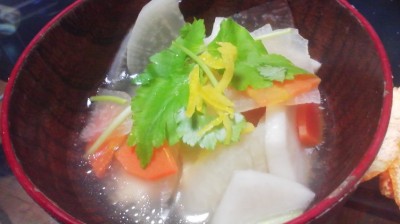 My family`s Ozoni – in the Kanto Style: a clear broth made of kelp,  dried bonito flakes, sake and soy sauce. Bits of chicken, slices of radish, yam and carrot are added and then it`s all topped with citron (yuzu) rind and a leafy green called MITSUBA. And of course there is a square piece of OMOCHI (pounded rice) down in there somewhere

Each of the festivals on Japan`s calendar of traditional events has its own special foods- there are even set foods for the Western holidays which have been adopted by the Japanese in recent decades- Chicken and cake on Christmas Eve, and chocolate on Valentines. Most of these consist of a single special dish or even just one or two festive sweets, though on the Hina Doll Festival (in March) there is a whole set traditional meal which consists of a main dish (CHIRASHI ZUSHI) a soup (HAMAGURI NO USHIO), dessert (HISHIMOCHI) and a beverage (SHIROZAKE).

The most elaborate festive dishes, however, are reserved for O-Shogatsu, the Japanese New Year Festival which takes place over the first three days of the year.

In my previous posts I have written in detail about TOSHIKOSHI SOBA (年越しそば), the buckwheat noodles eaten at the end of the year, and then about the elaborate array of symbolically meaningfull (in an auspicious way) dishes which are eaten cold over the three day period beginning on New Year`s Day (GANTAN, 元旦).

Looking over these articles I realized that I have forgotten to write about O-Shogatsu`s most important festive food- a soup called OZONI. Why do I say this is the most important? Well for a couple of reasons – with the more important  being that it is the most universal New Year`s dish (though it exists in many different forms depending on the region). While some families in Japan might not eat buckwheat noodles at the end of the year or enjoy a wide array of Osechi because of  regional or family custom or because they are too difficult or expensive to prepare, just about every family in Japan, no matter what part of the country they are from eat Ozoni for the first three days (or at least on the first day). 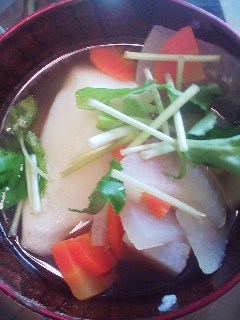 The other point is that traditionally, this dish was not merely a symbol of good luck, long life and prosperity- for the eating of the ZONI soup, or more specifically the pounded rice cake (OMOCHI) placed in it, was a religious act: a consuming the life-force energies which they had absorbed on New Year`s Eve when the God of the New Year (TOSHIGAMI-SAMA) descended upon the house. This was believed to provide a charge of positive energies.

Here is a HAIKU (which most young Japanese will no doubt find amusing) reflecting the sacred significance of ZONI:

which I translate (quite unskillfully) as: I am struck by a sense of the divine- as I face the New Year`s soup

And while most people today do not believe this anymore ( or have even heard about this concept), it is still the eating of ZONI and the MOCHI within it that make most Japanese feel that the New Year`s has really begun.

It is also the one dish that cannot be bought at a department store. Each family has its own recipe- though this is usually dictated by ones home region (either the mother or the father`s).

The abundant and nutritious ingredients that the ZONI contain were surely a treat for people of past ages when such foods were scarce. Even families that did not eat very well during the year would scrimp, save and make an effort to have a proper New Year`s zoni .

The great  poet and artist BUSON (蕪村 1716-1784) captures the feeling of what it must have been like for the common folk to enjoy a hearty new Year`s soup in this HAIKU:

And maybe most importantly, there are many who feel (as I do) that the OZONI is the most delicious part of O-Shogatsu (besides the sake, of course!). It is something that I would actually like to have available all year round ! I especially like the occasional hint of citron which hits the palate in my own family`s recipe!

And remember that even though it is winter (and cold in a Japanese house) the Ozoni is the only dish served hot. 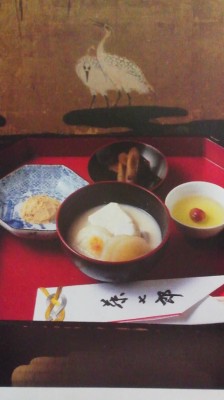 A traditional Kansai-style zoni (center) with a milky white miso based broth, tofu, radish, yam and a round MOCHI rice cake (which is dipped in the soy bean powder (left) before eating

The most disitnctive (and interesting)  regional difference in OZONIs is that between Eastern Japan (which includes Tokyo and the North-East) and Western Japan ( the area around Kyoto, Nara and Osaka).

In Western Japan the rice cakes are round. This is the more authentic Japanese way, in fact – while the square rice cakes used in Eastern Japan reflect the Samurai (as opposed to the courtly, or merchant) culture. Apparently, warriors used to take square pieces of pounded rice with them as a preserved and easy to prepare food while travelling or before battle.

But  the shape of the rice cakes can seem like a minor point ( I mean it IS hard to even notice the shape after they have been placed in the soup) when  the soup stocks themselves are completely different: miso based in the West and soy sauce based in the East.

And of course, depending on the region, the other ingredients also vary greatly ( and I mean not only between Tokyo and Osaka or Kyoto but in farther flung regions)- and some Ozoni are quite surprising to hear about.

In fact, its a good pre- or post New Year`s topic of conversation in Japan: Tell me about your family`s OZONI!

I have always wanted to someday put together an OZONI festival at which I would be able to sample some (or many ) of the delicious ( and sometimes strange) sounding recipes ! 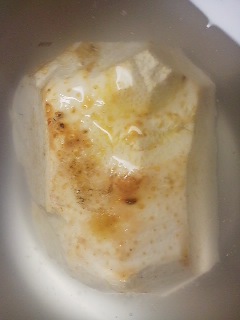 A large yam soaks in my kitchen. Bits of it are slice off and put into the ZONI.