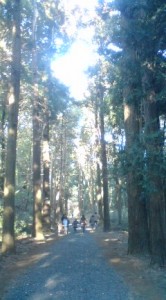 Down the middle of Mitsukaido ( in what is now Joso City, Tsukuba`s nearest neighbor to the east) runs the Kinugawa River. And though not very large or impressive at all by world standards, this waterway had long been a major channel for transport and transportation. It was because of this once thriving traffic on the river that Mitsukaido become the bustling town it once was. In fact, the name Mitsukaido (水海道), could be understood to mean WATER HIGHWAY( though apparently it actually derives from MIZU KAI TO ( 水飼戸)- watering place, as the Heian Period general Sakanoue no Tamuromaro found good water for his horses there). During the Edo Period there were markets held there six times each month at which the various goods carried by the river boatmen were offered for sale. When I catch a glimpse of the now boatless Kinugawa as I pass over a bridge, it always reminds me of this history, and gets me into the proper frame of mind for visiting the city. ( When approaching from Tsukuba by car you will first cross the smaller Kokaigawa River (小貝川) before entering the city.)

And though I DO sometimes head into the now run-down, rusting central district of Mitsukaido, mostly for the purpose of eating or shopping for Brazilian food around the station area ( there is a large community of Brazilians, mostly of Japanese descent there), my trips to what is now Joso City are mostly undertaken with the purpose of visiting the impressive string of important temples, shrines and old famhouses in the area.

There is the grand HITO KOTO NUSHI JINJA Shrine (一言主神社), which was established in the 9th century, ｔhe venerable GUGYO-JI Temple (弘経寺) where lie the remains of Sen-Hime (千姫), the grandaughter of Tokugawa Ieyasu (whose life was so dramatically tragic), the O-NOGO- TENMANGU Shrine (大生郷天満宮) which was established in the 10th century by the son of Sugawara no Michizane himself, to enshrine the spirit of his father, and the amazing SAKANO HOUSE (坂野家住宅), a mid-Edo period thatched roof farmhouse which is often used to film historical dramas, all of which I have written about before, and strongly recommend visiting. 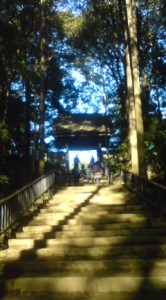 The steps leading up to Anraku-Ji`s outer gate

But on January the third there is ONLY ONE TEMPLE in Mitsukaido that I would make a special trip to- ANRAKU-JI (安楽寺) or as it is affectionately known to devotees- GANSAN-DAISHI ( 元三大師). This Tendai Sect Temple was first founded back in the 10th century, but it quickly rose in popularity during the Edo Period, when the great Heian Period priest Ryogen (良源), who was at one time an influential Abbot of the Enryaku-Ji Temple in Kyoto ( one of the most important temples in Japanese history) was enshrined there. The temple consequently became a place to cleanse oneself of the impurities of being at an unlucky age ( YAKU YOKE, 厄除け). It also served the function of protecting Edo Castle from the unlucky North-Eastern direction. This was because Ryogen was considered ( and still is by many) to be particularly skillful at keeping bad energies away.

By the way, Ryogen is referred to as GANSAN DAISHI by his devotees, and thus you have Anraku-Ji`s nickname. ( Honorific post-humous names are used , especially by devotees, to refer to some of Japan`s Great Buddhist priests of the past: Kukai is Kobo-Daishi, for example, and Saicho is Dengyo-Daishi)

January 3rd ( actually the 3rd day of the 1st month according to the traditional calendar) is Ryogen`s Memorial Day, and that is why on that day every year there is a special event- now known as the DARUMA GOMA- at which Daruma dolls are sold outside the temple, and inside the courtyard, in the GANSAN DAISHI Hall a ritual GOMA TAKI fire is kept going by a priest. This fire is believed to help make wishes come true.

( I have written in more detail about GOMA TAKI here:

Then at around 2:30 PM, the priests mount a special platform and toss mochi rice cakes and other snacks to the crowds which gather to GATHER IN these auspicious items.. 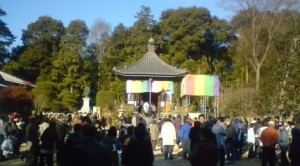 Upon entering the main courtyard on January the 3rd, one sees straight ahead not only the Gansan-Daishi Hall ( in which the GOMA TAKI was being performed), but a mysterious platform draped in colorful fabric

Here is a brief description of the event as I experienced it one beautiful January 3rd.

After parking and getting out of the car, we headed down the long dirt path which leads through a woods to the temple`s main gate. This area provides a habitat for numerous birds of various species and throughout the year this path is a good place for bird watching and listening. On January 3rd, however, the crowds and all the excitement make it a bad day for hearing, let alone watching birds.

I did, however, spot a raptor of some sort soaring high overhead. 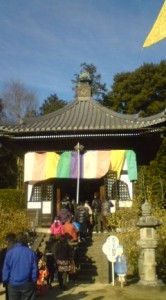 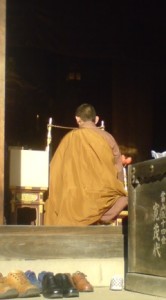 Climbing up the staircase and passing through the main gate, we came to the small market-some vendors selling DARUMA DOLLS and others typical Japanese festival foods or toys. Not very attractive as far as festival stalls go. We went by them without so much as giving a second glance.

Just past the so-called DARUMA MARKET we came to one of the temple`s main gates. Anraku-Ji has the unique characteristic of having different gates for people who have come to pray for different things: the East Gate for those coming to pray for Good Luck, the South Gate for Health and Long Life, the West Gate for Pregnancy and Easy Delivery, and the Central Gate for those of Unlucky Age. 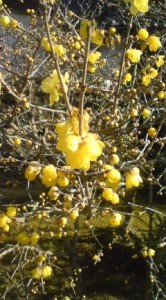 Walking through a gate ( I chose the South Gate), I took in the scene. It was a beautiful day. Blue skies with delicate lace-like clouds. The temple`s main courtyard not only glistened with color- festive fabrics on the buildings- including the small elevated GANSAN DAISHI HALL and a curious metal platform, but also plenty of shrubs bearing bright red berries ( nandian, manryo, senryo) and to everyone`s delight- plum trees and RO-BAI trees in bloom.

These blossoms filled the air with a thick, sweet scent. 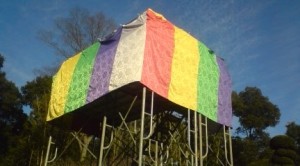 There was a line leading to and up the staircase of the GANSAN DAISHI HALL. It was up there that the priest had the ritual GOMA fire going. Devotees were told ( by a sign) that they could make one wish.

Others, who were of unlucky age (19, 37, and especially 33 for women and 25, 61 and especially 42 for men) were waiting on line to purchase some of this temple`s unique amulets for removing their bad energies. These included a puzzle- like wooden board from which the character for YAKU (厄)- the bad energies associated with unlucky ages, could be removed, thus removing the YAKU!- after writing your name and age on the tablet, and paying 500 Yen. 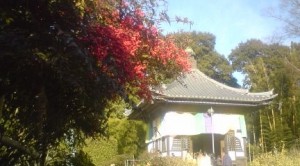 At about 2 PM there were bursts of fireworks up overhead. These were AIZU NO HANABI ( signal fireworks) to let everyone know that a special event was going to take place- and in this case it was scheduled to begin at 2:30.

By 2:15 a large crowd had already gathered for what many had been waiting for- the priests would mount the platform and hurl festive rice cakes and other snacks to the crowd.

When the priests and another unidentified VIP went up the ladder, the excitement built.

Unfortunately, the head priest went into a long speech. It lasted 30 minutes.

Most of the crowd had become so dulled by this sermon that when the rice cakes did start to rain down many were caught off-guard.And that is no laughing matter- since the rice cakes are hard as rocks. I would recommend bringing a baseball glove if you go next year.

Also, standing right under the platform is probably the best position, as the priests just dump lots of snacks straight down, rather than bothering to toss.

I luckily got one mochi cake- on a deflection. 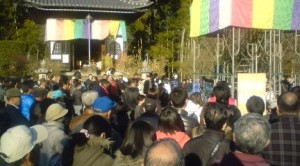 The crowd starts to grow around the platform at at about 2:15PM

Its amazing how quickly the place cleared out after that.

We left with everyone else. And just like most of those around me, I was in good cheer!

On the way by we headed into central Mitsukaido for some Brazilian food! Cheap, filling and fun! 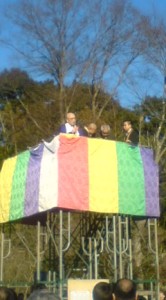 The priests mounted the platform at 2:30 PM

The priests mounted the platform at 2:30 PM

Read more about Mitsukaido`s Brazilian supermarket and restauarants at: 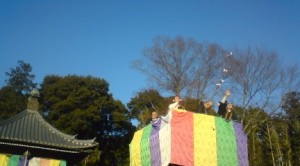 After an overly long speech, the priests finally began to throw mochi rice cakes ( hard as rock!) to the crowds below (about 3PM) 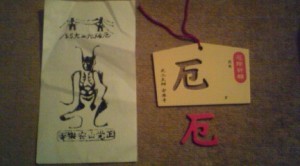 Two of the curious charms on sale at the temple which are used for YAKU-YOKE (厄除け)- removal of bad energies for people at an UNLUCKY AGE.

Also, read my article about the Gugyo-Ji Temple, Sen Hime, and the Sen Hime Festival which is held in Mitsukaido (Joso City):