Japanese Farmers Let Their Daikon Radish Chill Out in the Soil- the Colder, the Sweeter! 25 January, 2019 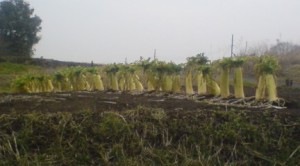 Daikon Radish Left To Sweeten In The Soil In Tsukuba

The first time you saw a Japanese daikon, you were probably quite surprised by its size, especially if you realized that it was a RADISH, and distant relative to the cute little reddish ones we eat in the West. If you live in a big city like Tokyo, after that first encounter, you might not ever  give this veggie much thought again, as it is very cheap, commonly available all-year-round, and an ever present part of the everyday Japanese diet. In other words, mundane. 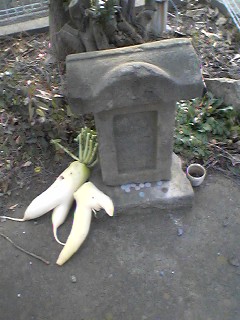 In Tsukuba, however, where you still cannot get very far without passing a vegetable field of some sort, we find ourselves stopping on occasion, or should I say, being stopped in our tracks, by curious DAIKON ENCOUNTERS, of which there are basically two types. In December or January we might come across one or more two-pronged (futamata) daikon offered to a roadside sacred stone, and then in February or early March we might suddenly notice crazed rows of unharvested Leaning-Tower-Of-Pisa-Like daikons which seem to be trying to WORK THEMSELVES OUT OF THE SOIL. Both are very surprising scenes indeed, which make one give pause, to admire this MOST COMMON OF ALL JAPANESE VEGETABLES, and also think about its role in Japanese culture and history.

Since I have written in detail about the unique way in which Tsukuba’s farmers deal with their FUTAMATA DAIKON, here I will discuss the protruding radishes that you can find in any  of Tsukuba’s daikon fields this week.

Though now daikon are available all year round, traditionally they have been a vegetable considered best enjoyed  in winter. In Tsukuba, after the farmers have harvested their radish crop for market, they leave some behind for their own consumption-often just a single row. 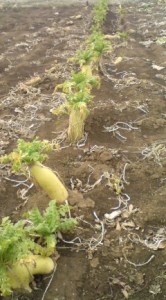 It you try to store daikon at home you will find that they soon start to dry out. In the old days, to keep them fresh, farmers would store their radishes by BURYING THEM in shallow ditches called MURO (室), after having covered them with straw. These days, it is much more common for the farmers to just LEAVE THEM IN THE FIELD until they are needed.The parts of the radish below the soil line retain all their juiciness this way. Farmers also noticed that the colder it got, the tastier these daikon became, the result of a chemical reaction which occurs within the vegetable to prevent freezing. The same thing is done with HAKUSAI (Chinese cabbage) to keep them fresh, though the cabbages you find left  out in the fields like this look rotten. In fact, if the sad looking outer  leaves are peeled away, you have a beautiful and delicious cabbage. 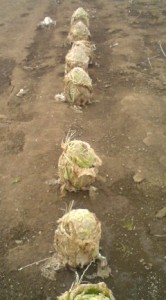 Thus, when you see these wayward looking roots bursting out of the ground, you have not found crops left in the field to rot (though some eventually do), but just the farmer’s preferred way of keeping them, and sweetening them up, before eating! In fact, you are hardly seeing any root at all! Unlike the carrot, whose edible orange cone is all root, only about the bottom third of the daikon is the vegetable’s root (it has little stringy roots coming out of it there) while the upper part, which comes to stick out of the soil in early spring, is the stem! In the most popular variety these days, the aokubi (green-necked) daikon, the stem is a clearly distinguishable green.

A form of radish was brought to Japan at least 1200 years ago from China, to where it had come from Europe more than a thousand years earlier still. It was in Japan, however, more than anywhere else in the world, that the radish thrived. Over the centuries. about 200 varieties have developed here, and some of these are of extreme lengths and sizes.

All these varieties developed as the seeds of radishes cultivated in the different soils of the regions of Japan would be exchanged by travellers (especially pilgrims during the Edo period). It was said in the old days that each village’s daikons were different, and when someone tasted a delicious one, they would ask for some seeds to take back to their hometowns. Many of the varieties which can be found today are named after the regions in which they are grown: the SAKURAJIMA DAIKON, from Kagoshima Prefecture, for example, or the NERIMA DAIKON, which was the most popular of the daikon eaten in Edo (old Tokyo) as it was cultivated in what is now Tokyo’s Nerima Ward.

As I have written in the article mentioned above, farmers around Japan who come across two-legged radishes, do not sell them, eat them, or throw them away. This is because they look like human legs! In most of Japan they are offered to the God DAIKOKU-SAMA, while in Ibaraki they are usually left in front of a road-side DO-SO-JIN sacred stone.

Describing the number of ways that the Japanese eat radish would require a separate article, but I’m sure those of you who have been in Japan even for only a few days have had some type of daikon TSUKEMONO (pickles), grated radish (as a condiment), pieces of daikon in your miso soup, or at least smelled the pungent odor of the radish stewed in ODEN during winter at every convenience store. 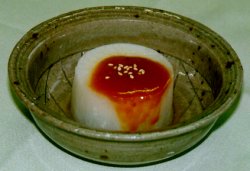 As for me, I prefer the citron flavored furufuki daikon.

No matter where you see it, or how you eat it, next time you encounter DAIKON, please give it the RESPECT IT DESERVES!

You might also see daikon which have been hung out to dry in the sun (quite a sight!). This is part of the TAKUAN (沢庵) making process. Takuan are some of  Japans strongest smelling pickles. Here is a Tsukublog article Ive written about hanging daikon out in the sun: 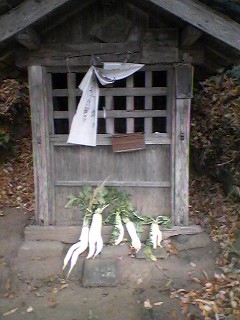