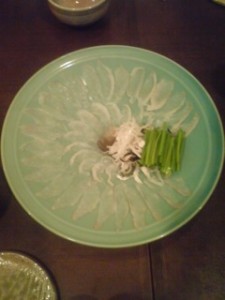 Fugu sashimi at the restaurant Ogawa in Tateno, Tsukuba (across from the Onogawa Community Center). Full course fugu meals can be had for about 5,000 yen – if you come in a group of at least seven!

A full course FUGU (河豚) meal, shared with good friends in winter, just might be THE quintessential Japanese dining experience. Flavors- subtle yet sublime, textures- delicate and airy-light, and of course, delightully beautiful presentation. Other important features of Japanese culinary culture are in evidence as well –  consciousness and celebration of the season ( fugu is representative of winter), the  use of a full array of food preparation techniques ( sashimi, frying, boiling, etc), and the fun of having to share the food  (out of serving plates) with your companions- all of whom are probably just as excited as you are to be partaking of the famous delicacy( something they probably don`t do very often!). 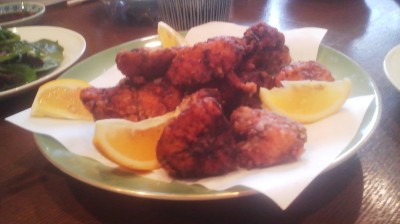 Deep-fried fugu at Ogawa in Tsukuba

I know that there are  many out there who will disagree with me when I say that fugu is delicious. Not only do most English language guidebooks to Japan dismiss its taste as being bland and uninteresting ( while sensationalizing the danger of eating it), but  many Japanese people that you speak to will say the same thing as well-  that it doesnt have much taste and isnt worth the price ( which they imagine to be AT LEAST 100 dollars, or 10,000 yen per person).

To this I respond that with fugu, just as with most of the other FINER THINGS IN LIFE- one taste, or one experience is not enough ! It takes time to develop an appreciation ( I`m sure that if I were to taste a highly rated thousand dollar bottle of French wine right now- something I have never done before- that I wouldn`t like it very much, or think it worth the price !). 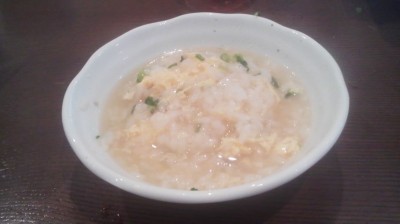 My OWN first experience with fugu was not very memorable, either. It is only after several years of annual tastings that I`ve grown to crave it!

I believe that  this is  the  reason that many Japanese, who usually have given fugu a try probably only once in their lives, come to the conclusion that-  they would prefer canned sardines ( or something of the sort) to fugu, anyday.

Well, there is good news for those who couldn`t or didn`t want to spend large sums developing a liking for A FISH- fugu is now readily and safely available at VERY REASONABLE prices- just the other day I had a thrilling full course in Tsukuba for just 3,500 yen ( whereas until recent years it would be at leat about triple that)! Recently, I`ve seen fugu courses advertized at similar prices at other restaurants, as well.

This  makes it easier for long-term foreign residents to sample pufferfish, at least once a year, while they are in Japan. That should enable anyone after a few tasting experiences, to develop a love for this most esteemed of all Japanese delicacies. 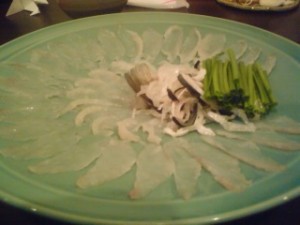 For those of you who have never heard of fugu before, you might be wondering why I have alluded to the dangers of eating it. What dangers? Well, the fugu ( and there are MANY varieties of blowfish in the world), can be deadly if not prepared correctly. This is because there is an extremely potent poison present in some of its organs- especially the liver. Over the ages many have died ( a horrible death) after having eaten it. At times, the eating of this fish has been banned in Japan ( not only to protect the populace, but to keep the poison out of the hands of potential assassins!). 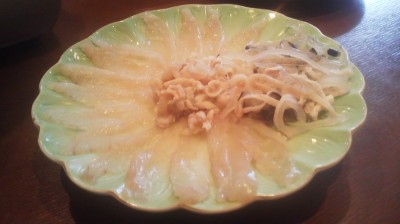 The danger, however, is really A THING OF THE PAST. Since the peak post-war fugu-poisoning- year of 1957, when more than 170 people died, the Japanese government has enacted stringent regulations regarding fugu preparation and has imposed rigorous training regimens on  those who want to become fugu chefs. For this reason it is now almost unheard of for a poisoning to occur at a licensed restaurant or shop ( and anyway, even in the past, most deaths were the result of amateurs preparing the fish).

For this reason I am disturbed by how the English language media persists in comparing the eating of fugu to playing Russian roullette ( in addition to flippantly under-rating its taste).

With millions of people enjoying it and only a handfull dying over recent years ( and they, not from  fugu eaten at reputable restaurants), partaking of the delicacy seems to be much less risky than venturing off to many of the countries which these same guidebooks or writers recommend visiting. Its certainly safer than riding a bicycle!

Dont get me wrong- the fugu DOES contain an extremely deadly poison, and it should NEVER be eaten except when prepared by a licenced chef. And, there are a few twisted people out there in Japan, who might tempt fate by eating (on their own) the fugu liver, just as there are in any country people who cannot suppress the desire to put dangerous substances into their systems.

Please understand, however, that in today`s Japan, eating at a fugu restaurant does NOT involve danger, and people who go out for fugu do NOT think of themselves as being engaged in any form of risk taking behavior. 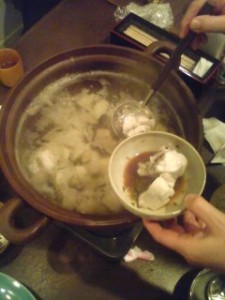 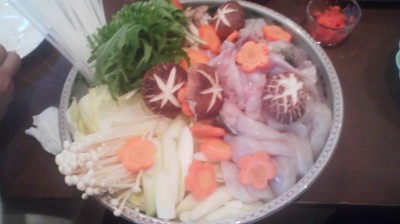 All these veggies, mushrooms, and tofu go into the pot, as well! 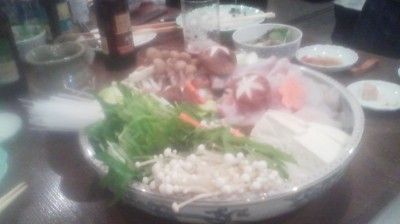 All the veggies, tofu and FUGU simmering in the pot at Ogawa, in Tsukuba

There is certainly a lot of interesting information about fugu ( with plenty on its toxicity) online. Here is a link :

But let me add a little to this.

The characters usually used to write the word fugu are 河豚 , which literally mean RIVER PIG. These characters were borrowed directly from the Chinese. Apparently, in China, pufferfish inhabit some rivers( eg -the Yangtze), in addition to the seas off the Chinese coast. When these fish panic and inflate themselves, they look like pigs. They also emit a squeal reminiscent of an oink. There you have it- river pigs!

The custom of eating fugu in Japan, however, did not originate in China . The archaeological record shows that FUGU bones have been unearthed at numerous SHELL MOUNDS ( kaizuka), which are a typical feature of Japan`s prehistoric JOMON PERIOD ( before 400 BC). Since it is widely accepted that these shell mounds were the garbage dumps of Japan`s prehistoric inhabitants, and the fugu bones have been found among the bones of other commonly eaten fish, it is assumed that the fugu were used as food.

Did these JOMON PERIOD Japanese know how to remove the fugu`s poison? Did they just eat the potentially fatal fish along with the rest of their catch while enduring heavy casualties over the years? No one is sure.

I would have to suggest the possibility, however, that the fugu found at these ancient sites could have been used for other purposes- such as making poisoned darts or arrows, etc. Their skin, or spines could also have been used ( as they are today for wallets, etc).

The reappearance of fugu in the Nara Period, a time of rampant IMITATION of Tang Chinese customs and culture, suggests to me that it was a love of fugu by the Chinese of that time, which would made fugu-eating prestigious among the Nara aristocracy ( if it was in fact eaten by them).

What made me think this was true, even before reading about the Nara Period fugu, was the fact that one of the most famous poems in Japan about the fish,- which literally asserts that fugu is SO GOOD ITS WORTH DYING FOR (一死に値す) is actually by the great Chinese poet SU SHI 苏轼 ( called SOTO-BA  蘇東坡 in Japan). And though this man of letters lived in the 11th century, it reflects the fact that  fugu must have been considered a great delicacy in China .This would surely would have tempted members of the Nara aristocracy to revive its use in cooking, especially since it is so commonly found in the seas around Japan.

In later centuries SOTOBA`s words, placing such a high value on fugu said would certainly have held plenty of weight with the eating preferences and tastes of the Japanese intelligensia, and later the townsmen of the Edo Period.

As I suggested earlier, the Edo Shogunate ( 1600-1867) did not want to have  a deadly poison readilly available anywhere near the Shogun himself. Thus , and thus, to this day, fugu eating is more common in Western Japan, far away from the capital. Yamaguchi Prefecture, during the Edo Period it was called Choshu) is especially famous for the fish, and there people call it FUKU, which means luck, but could also hints at the word FUKUramu-which means to inflate-which is what this fish does when frightened.

During the Edo Period fugu was NOT usually eaten as it is today ( sashimi, fried-etc), but was made into a soup called FUGU JIRU ( 河豚汁).

Since there are numerous poems alluding to the dangers of FUGU, from the Edo Period, we can assume that there were many cases of poisoning deaths. There are no written records however which would provide us with statistics. I have found , however, an interesting list of traditional treatments for fugu poisoning.

drinking squid ink, eating the fruit of the gardenia plant or traditional mothballs, and most interestingly- burying the victim up to his neck by the sea.

After the fall of the Shogunate,  the first officially sanctioned fugu restaurant was in, you guessed it Yamaguchi Prefecture, in the port city of Shimonoseki in 1888. A great promoter of the fish was Japan`s first Prime Minister Ito Hirobumi- himself a Yamaguchi man! The full fugu course then began to evolve over the years.

It was not until 1908 that the exact sources of the poison within the fish were located and then not until the late fifties that the government implemented the strict standards which have now taken the danger out of eating fugu. 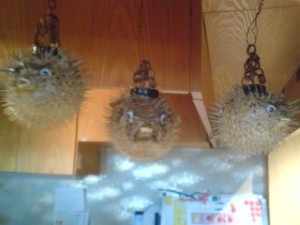 FUGU puffer-fish turned into decorations at a sushi restaurant

A place in Tsukuba that I would recommend going to for a fugu dinner is OGAWA. For most of the year this establishment is a soba shop which is open only on the weekends. In the winter months, however, the chef ( properly licensed, of course), serves fugu courses.

The highlights of the meal were:

Sashimi-  fugusashi- sliced so thin as to be translucent, arranged on the dish to look like a chrysanthemum. These delicate tidbits are dipped in a tangy ponzu sauce to which a garnish- momiji-oroshi is added. The result is a surprising burst of flavor.

Then there is the fugu stew ( techiri) to which many parts of the fish and lots of vegetables are added. The bits of fugu that you spoon up are soft and flaky, and if you take your time to savor them, you will be rewarded by a truly deep taste.

The remaining broth is then poured over rice to make a savory porridge ( zo-sui).

At the end of the course, we were all so full that we refused the dessert that the chef had prepared. With good company it was a splendid, unforgettable evening, and true Japanese experience. Well worth the 5,000 yen ( for this price you will need at least 6 people in your party)

And remember, these days fugu is not a food you think you might die for- it is simply TO DIE FOR- and by that I mean simply DELICIOUS! 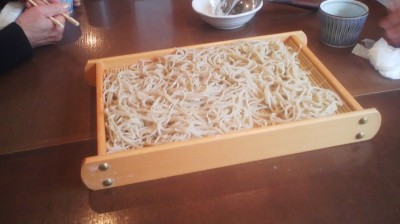 Ogawa is a soba restaurant and if you think you`ll have the room in your stomach you cn ask the chef (Ogawa-san) to make some JU-WARI (100% buckwheat) soba noodles – for no extra- charge!