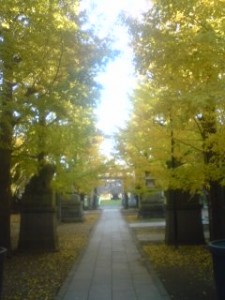 Its official name- the Kanamura-Wake-Ikadzuchi Jinja (金村別雷神社) can be quite a mouthful. And anyway, most Japanese would  not even be able to read these characters correctly ( they would probably say Kanamura BETSURAI Jinja). So when you set out to look for this venerable shrine on the eastern bank of the Kokkaigawa River in the village of Kamigo (上郷), Tsukuba city ( and it is NOT easy to find!), ask the locals to direct to RAIJIN-SAMA, the affectionate nickname that they have used for generations. 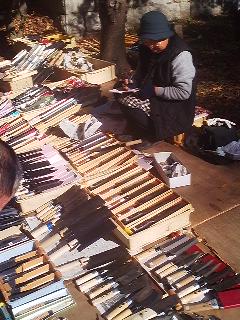 A vendor of knives and agricultural tools at the annual market held at the Raijin Sama Shine in Kamigo, Tsukuba

I was there yesterday, on a beautiful, perfectly clear autumn afternoon ( I could see the mountains around Nikko way off in the distance). The gingko trees in full autumn color gave the shrines extensive grounds a golden glow, and as I strolled about examining the various structures ( the HONDEN- Main Hall, is an Important Prefectural Property) sacred stones, and other curiosites ( traditional tubes for launching fireworks, among other things), I was serenaded by the raucous calls of the numerous birds which take advantage of the heavilly wooded surroundings.

In fact, I was the only one around. The only sign that Thursday the 23rd would be the day of the big autumn festival ( one of the shrines two major annual events, besides New Years) was the presence of the  two amazingly tall, white festive banners which had been recently set up to announce that fact.

Those of you who  visit on the 23rd will find quite a different scene from the one I enjoyed today. Besides the usual festival food stalls ( which can be found anywhere in Japan) there will be a large and lively market of potted-trees and plants, and traditional agricultural implements and household tools as well (this is was of the last remaining traditional annual markets in the Tsukuba area).

There will also be some performances of local festival song and dance. 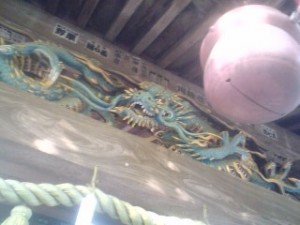 A dragon carving at the shrines worship hall

Established in the year 931 AD by the founder of the Toyota (豊田) Clan, descendants of the Emperor Kammu who long ruled that part of what is now Tsukuba City ( before being absorbed into Tsukuba City  the area was called Toyosato Town).

Inspired by a dream he had, Lord Toyota had the notion of bringing over the God of Thunder and Lightning- RAIJIN, from a shrine in Kyoto, in order to help provide bountiful harvests. ( In Japanese religion, spirits can be divided at their MAIN SHRINE and then propagated in another part of Japan in a branch shrine. This concept is called BUNREI – 分霊, and the ceremony KANJO- 勧請).

Toyota was bestowed a beautiful golden colored dragon-motifed banner by the Emperor Reizei, and the dragons came to be closely associated with the shrine. 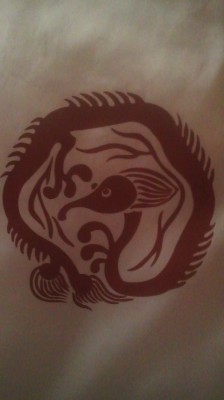 Though with end of the Toyota Family`s rule over this area (after 26 generations) the shrine was destroyed, it was soon rebuilt and the site has been the object of great devotion for more than 1,000 years. It has been a place where local residents ( and those from further afield) have prayed for health and household safety ( as well as good harvests),and it eventually came to be considered one of the 3 great RAIJIN Shrines of the Kanto Region ( along with one in Mito, and another in Gunma), and was especially famous for its rain invocation ceremonies ( AMAGOI, 雨乞い).

As was the case with many shrines in Japan ( and especially in the Tsukuba Area) there was also a Buddhist Temple established on the grounds.This was abolished just after the Meiji Restoration of 1868 and the subsequent fervor in separating what was deemed to be native Shinto from foreign Buddhism. 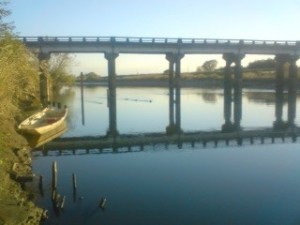 This old bridge(the RAIFUKU BASHI BRIDGE) over the Kokkaigawa River was badly damaged in the earthquake of 2011, but has finally been repaired 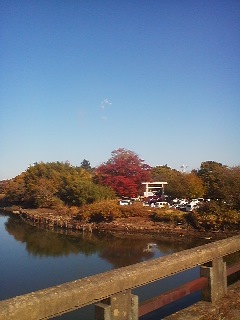 The Raijin Sama Shrine as seen from the bridge. Note the puffs of smoke which linger in the sky after some signal fireworks had been launched at exactly 10AM to announce the opening of the festivities

If you do visit this shrine ( not only for Friday`s event, but anytime), take note of the monument dedicated to the Edo Period government official Takegaki Sazaemon （竹垣三右衛門) who was stationed for two weeks out of each month in kamigo- which at that time was under direct rule of the Shogunate (TENRYO, 天領) because of its strategic riverside position. In time of dire famine, with infanticide on the rise, Takegaki  implemented a policy of social welfare, assisting poor families and pregnant women with money, tools, etc. initiating public works projects AND bringing in settlers from other parts of Japan- including Hachijo Island.

(I hope to dedicate a future post entirely to Takegaki) 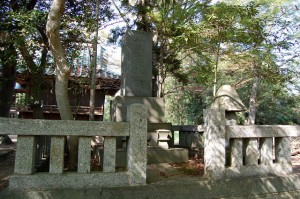 A stone monument commemorating the good works of the local Edo Period offical Takegaki Sazaemon who discouraged infanticide, dispensed food to needy families and brought in settlers from as far away as Hachijo Island

Here is a map showing the shrine`s location: 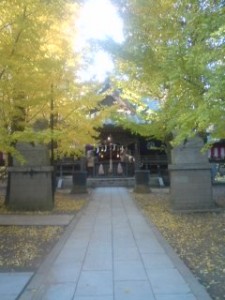 The Raijin Sama Shrine on the day before the Autumn Festival 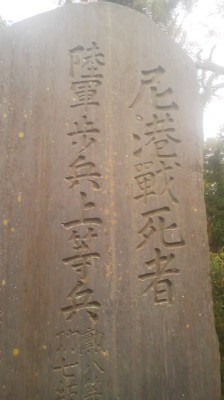 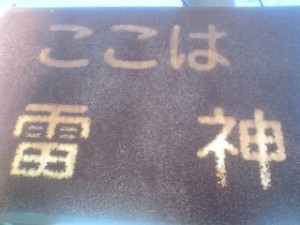 At what might have once been a bus stop, a beautifully rusted over sign reads: This place is RAIJIN 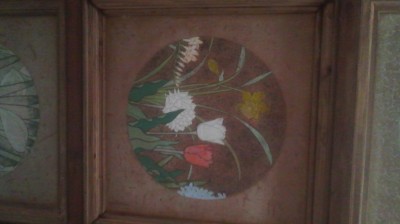 The grandfather of the current priest was an artist who belonged to the same circle as renowned Nihonga painter Yokoyama Taikan. The ceiling of the main hall is covered with works depicting birds, flowers, and vegetables – the bounty of the land! 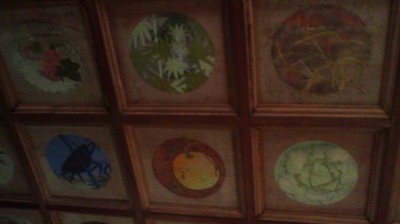 The ceiling of the Main-Hall 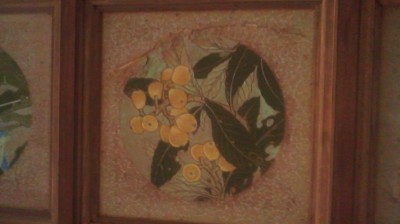 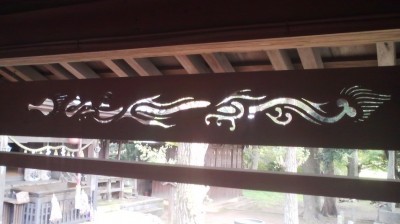 Dragon motifs carved into the shrine- tradionally daragons were believed to control rivers AND rain, and thus are important at this shrine 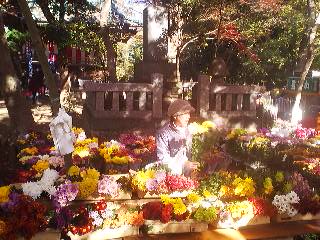 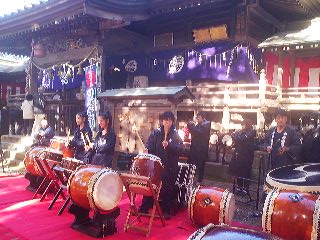 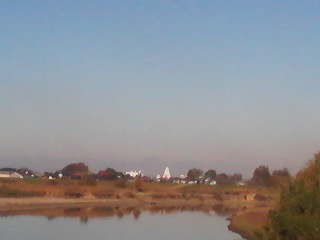 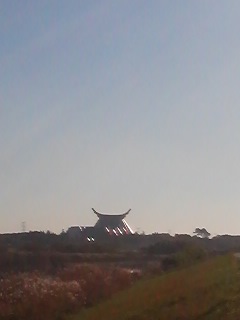 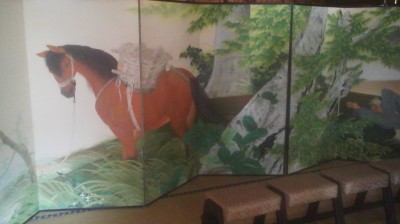 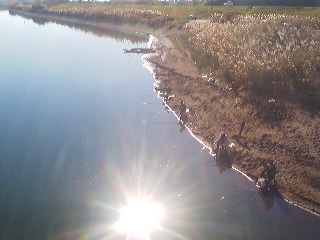