The Story of the URABORI (裏堀), the Irrigation Canal ( and alleged defensive moat) which runs through my old neighborhood in Hojo, Tsukuba 22 October, 2018 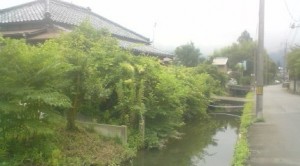 One of the more curious aspects of life in modern Japan is the presence of UNCOVERED gutters which run along many roads ( often on both sides!). Just wide enough for a tire to fit in, there has been many a time when I have had to help friends ( or strangers) try to get their cars out of these  traps. Such efforts, however, are  usually fruitless, and in the end the Japan Automobile Association ( JAA) and a tow-truck has to be called in to the rescue.

These gutters also pose a threat to pedestrians, especially at night ( my mother, visiting from New York, once got out of the car and nearly broke her ankle as she stepped  unknowingly down into one) and to animals as well ( sometimes hapless baby wild boar get stuck in roadside gutters up on Mt. Tsukuba).

I had always thought these open gutters to be hazardous, a worry when driving along already impossibly narrow streets, and just  a bad thing in general. But when I moved into a rebuilt farmhouse in the old town of Hojo, things just got ridiculous- in front of the house ran a gutter of canal-like dimensions, completely uncovered! Whole cars or even whole families could fall in, and according to my neighbors, over the years, there HAVE been many FALLINGS into what the locals refer to affectionately as the URABORI (裏堀)- literally, the BACK MOAT. 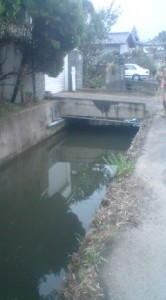 And though when it first came about that I would be living in Hojo, I imagined my interest would be focused on all the old houses and shops, and  temples and shrines which are within easy walking distance, it has been the URABORI which has really been the focus of my attention over the past couple of months. The same could be said for most of the friends and acquaintances who have come out to visit me- it is the URABORI which makes the biggest impression- and provides the most FUN ( in summer). The reason for this is that this trench ( several KMs long) is filled ( and I mean REALLY FILLED) with crayfish ( ZARIGANI)-  little lobster-like creatures which can be caught by tying some squid ( or just about anything edible) to the end of a string. When the zarigani grab onto the bait with their claws, you just have to gently pull it up and drop it into an awaiting bucket.

It has been amusing to see how most of our guests over the summer, whether toddlers or grandparents, got so caught up in catching ( and releasing) these interesting and beautiful creatures. Crayfish are NOT native to Japan. They were first imported here from the U.S. nearly one hundred years ago by a  company located near Yokohama. This firm had the crazy notion of breeding bullfrogs as a food here in Japan ( a plan which completely and utterly failed!). The crayfish were brought over as food for the frogs. A few of both the frogs and the crayfish escaped into the wild at that time, and over the subsequent decades have spread all over Japan ( wiping out many local creatures), even ( or should I say-  especially) to the URABORI. 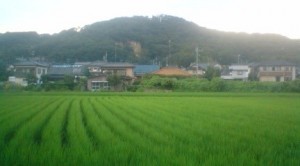 Hojo, the town I used to live in, is sandwiched between the rice fields and Mt. Jo-Yama (城山), literally Castle Mountain

It is not only the creatures living in it ( those which somehow avoid the clutches of all the crayfish- the small fish, frogs, snakes, etc.), or the daily variation in its level ( something I always check first thing in the morning) which makes the URABORI interesting- there is a fascinating story to it, as well. One which provides a good introduction to the general history of this area.

Let me begin the URABORI`s tale with a little background. During the 10th century, an extremely violent conflict devastated the area in and around what is now Tsukuba City and left its mark on this part of Japan until very recent times. This dark period was known as the MASAKDO NO RAN (将門の乱- the Masakado Uprising), in which the warrior Taira no Masakado first fought against his uncle (  Taira no Kunika, a local ruler) and then grown ambitious after victory, decided to turn this local spat into an outright revolution which culminated in his declaring himself the New Emperor (SHINNOH, 新皇).

Masakado was eventually defeated ( after a total of six years of crippling warfare in the region) by a coalition of forces brought together by Fujiwara no Hidesato, and Masakado`s own cousin, Taira no Sadamori.

As a reward for his service to the Emperor in Kyoto,  Sadamori was granted extensive lands in the Tsukuba area, including all of what is now the town of Hojo. However, as the successful warrior preferred life in the capital( present-day Kyoto), he left his adopted son Taira no Koremochi in charge of his fief in what is now Ibaraki Prefecture.

Koremochi and his descendants changed their name to TAKEH (多気)- though this is now usually pronounced TAKI, and set up their headquarters ( and their main fortress) on the little mountain just to the south of Mt Tsukuba ( about 120 meters high) which local people still call the Castle Mountain- Jo-Yama (城山).

The Takeh family ruled for six generations ( about 200 years), and were apparently well respected by the local populace.  The last ruler of the line, however,- Yoshimoto,was especially beloved, and to this day is referred to with affection as TAKI TARO. The reason for this , it is said, is that he initiated and completed an ambitious project which involved the creation of an irrigation canal which would carry well needed water from the Sakura River ( 3 Kms away) to the rice fields of Hojo- now very famous for its delicious rice. 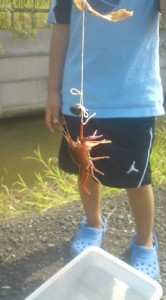 Ironically, this commendable accomplishment turned out to be Yoshimoto`s ( and his entire line`s) undoing.

This is what happened.

In the years following the defeat of Masakado, the TAIRA family ( usually referred to as the HEIKE, by the Japanese), under the leadership of Taira no Kiyomori, came to dominate Japan both militarilly and politically. Eventually, this family came to grate on a few important nerves, and by the 12th century, an uprising against the Taira, led by Minamoto no Yoritomo, culminated in the total defeat of that once great family, and the formation of the first Shogunate ( military government) which was established in Kamakura.

Now lets remember that the Take ( or Taki) Family which lived on Jo-Yama in modern-day Hojo was originally part of the Taira Clan. Though having long changed their name AND having been active supporters of Minamoto no Yoritomo during the war, the family was NOT eliminated along with the rest of the ill-fated Taira. They were left in peace.

What happened, however, was that another very active and important ally of Yoritomo, Hatta Tomoie (八田知家), was granted territorry in this same area. Tomoie, whose family later changed its name to Oda, built a large fortress called Oda-Jo, a few kilometers from Jo-Yama Castle, in what is now the village of Oda in Tsukuba.

I guess it was inevitable that there would be problems with the two forresses being so near each other.

Anyway, according to local legend ( and in accordance with the historical facts) Hatta Tomoie in Oda had his sights set on Jo-Yama Castle right from the start.

His chance to make a move on his neighbor arose in 1193, not long after Yoritomo had been declared the official Barbarian Subduing General (SHOGUN). At a huge hunting event held for his warrior allies at the foot of Mt. Fuji, the new military government was thrown into consternation by an assasination ( The Soga Brothers Incident), and Hatta Tomoie used the fear which spread through the land at that time to his advantage.

What he did was claim to the Shogunate in Kamakura that the Taki Family, a remnant of the Taira enemy, was planning an uprising.

What was the proof? Well, they had just finished building a long trench in front of the mountain which was their base- surely this must be a moat! And certainly it showed that the Taki`s were preparing for an uprising against the Minamoto.

Taki Yoshimoto was summoned to Kamakura. Things did not go his way. He and most of his family and supporters were sentenced to death. Hatta Tomoie ( the Odas) took over.

Still, after about 800 years, the people of Hojo think fondly of Taki Taro ( as Yoshimoto, the last Taki is called), and every August there is a memorial service held for his him and his ill-fated family. 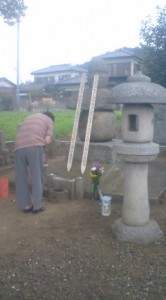 A local woman pays her repsects to Taki Taro. This five-tiered gravestone, typical of this area represents the five elements of sky,wind,fire,water, and earth.

Because my house is now sandwiched between the little castle mountain ( Jo-Yama) and the URABORI irrigation trench, hardly a day goes by in which I dont think of this story. The Jo-Yama mountain from which the Taki Family ruled dominates the local scenery. In fact, it is ironic that though I have now moved 6 kilometers closer to Mt Tsukuba, from the village of Konda where I enjoyed splendid views of that famous mountain, from my house in Hojo the twin-peaks which symbolize this region are completely blocked out by Jo-Yama!

The Urabori has been a source of excitement for me, my family and my friends. I just hope that none of us ever falls in ! 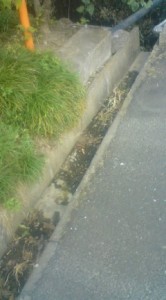 A typical roadside gutter in Japan 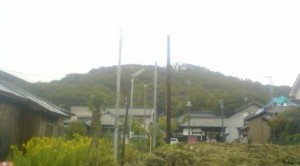 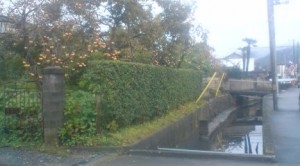 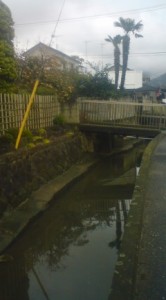 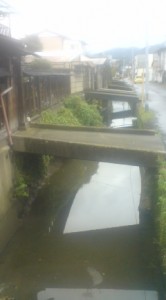 (I am re-posting this article after a visit this past weekend to my old neighborhorhood – now completely restored after the tornado of 2012. In fact, the town looks much better than it did before!)