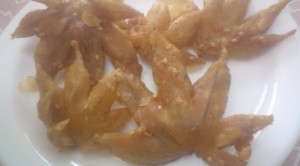 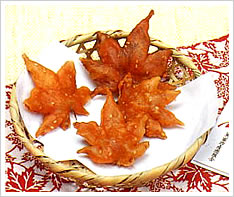 Autumn is truly a time of year to savor in Japan. With the passing of the stultifying heat and humidity of summer ( which usually lasts well into September), its a season to get out and enjoy excercize and sport, and just being outdoors in general-  to bask in the refreshingly cool and fragrant breezes and take in all the colorful fall vegetation. The comfortable temperatures also bring about an increase in appetite, which is just perfect, since the season is characterized by an abundance of delicious things to eat: especially fruits, vegetables, and mushrooms.

Most typically,the Japanese ( along with most other people who live in temperate zones) celebrate the season by MOMIJI GARI- autumn leaves viewing ( literally, maple leaf hunting), and the country abounds in traditional MEISHO (名所), famous spots for enjoying the spectacular foliage ( though I have found that because of the plantation of so many cedar trees after the war, and the presence of so many other conifers, that Japan seems to have relatively little autumn color, when compared to most other countries in the same climatic zone). And even in the concreted-over areas of Japan where there is not a REAL tree in sight ( and these areas are sadly increasing), you will find instead, plastic leaves of many colors decorating the shops, both indoors and outdoors.

And while over the centuries most who have gone  on these MAPLE LEAF HUNTING excursions have been satisfied with merely taking in the foliage with their EYES, or perhaps composing a poem ( or taking some photos) to commemorate the event, there are some who take things a step further- by literally taking in the leaves themselves. Yes, that`s right- by eating them! 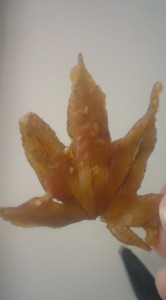 Legend has it that the great mountain ascetic ( yamabushi, 山伏) En no Gyoja, did just that about 1,300 years ago. Delighting in the beauty of the maple leaves, he decided to enjoy them more completely- by frying them up in rapeseed oil ( which was also used as fuel for lamps) and serving them to those who came to practice asceticisms with him on Mt Mino (箕面山) near present day Osaka.

Much to my surprise, I have learned by way of an Omiage (gift) from my friend Kaori-San, that this tradition still lives on on that venerable mountain. She had just come back from a visit to Osaka during which she made an autumn PILGRIMAGE to Mt Mino to enjoy the seasons colors. There she found a shop selling MOMIJI NO TEMPURA (もみじの天ぷら), maple leaves fried in a sweet batter, and covered in sesame seeds ( surely much tastier that those cook up by En!). 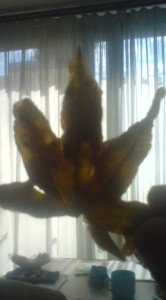 Holding the Momiji no Tempura up in the light

When I first saw the leaf-shaped objects on my plate, I thought they were some seasonally-motifed cookies. But when Kaori-San showed me the box in which they came, reading: MOMIJI NO TEMPURA, my interest was peaked.  As Kaori smiled slyly, I held the snack up to the light. Could it be? I grabbed the box and checked the ingredients. Yes! These were deep-fried maple leaves. Surely, the craziest way of GETTING INTO THE SEASON I had heard of yet!

Not only was it pretty tasty, but the sound of it created was not unlike that of walking through  dried-out autumn leaves which have fallen to the ground.

Beautiful,tasty, and plenty of fun-  eating or giving Momiji no Tempura is truly a special (and zany!) way of celebrating Japan`s most pleasant ( in my opinion) time of year. 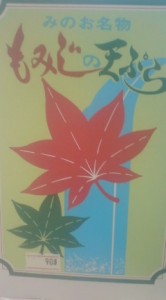 Momiji no Tempura come in this box

Here are some websites which contain information about ordering Momiji no Tempura and other famous treats from the Mt. Mino area: