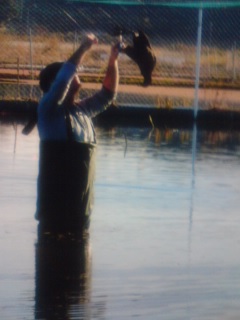 There have certainly been some changes for the better since we started to let people know what was going on in the lotus root growing areas around Lake Kasumigaura — that countless wild birds of all sorts were dying slow deaths after getting entangled in nets set up around the fields.

Clearly, many of the nets have come down, and many of those that remain have tended to be more carefully managed. By this I mean that the sides of these canopy-like nets are properly kept closed so that wading birds cannot just wander inside them.

For the past several months, Maurice Gillis and I have been monitoring the situation and had been relieved to find that the number of birds that needed to be rescued had been considerably smaller than what it had been in the past. 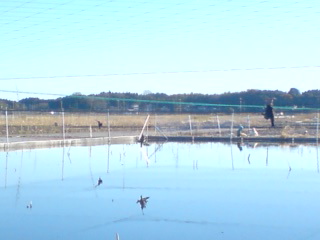 Then came autumn. The farmers have harvested most of their lotus roots and their pondlike fields lay all cleared of vegetation, creating what are obviously attractive frolicking grounds for the various coots and ducks who are passing through as part of their seasonal migration. Unfortunately, the farmers, who must surely be  happy to have gotten the harvest over with, have left their nets as they were, or completely untended, leaving this area a DEATH TRAP for these birds. I found more than 30 entangled in one field, and there are many more netted fields.

This is especially upsetting since the fields are empty of any crops and the birds (which the net companies suggest cause damage to lotus root!) CANNOT POSSIBLY BE DOING ANY HARM AT ALL. 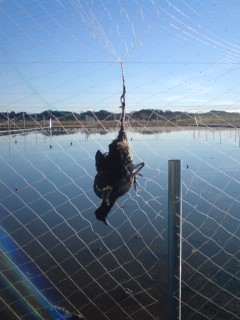 I was also actually able to observe for the first time how the birds actually fly into the fields THROUGH the nets, proving that the particular ones being used are not effective AT ALL in keeping birds out, and that the tax-payers of Tsuchiura have been scammed out of millions of dollars by a dubious deal between city officials and the netmaker.

If you would like to join in on our rescue efforts,which involves wading (in special suits) through the icy fields and untangling mostly ducks and coots before releasing them into the lake, please contact me.

We also need more people to know about this UNACCEPTABLE situation. Spread the word.