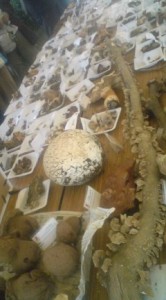 About 200 of the 400 types of mushrooms which grow wild within the Tsukuba City limits- laid out on a table at the Tsukuba Botanical Garden (through Oct. 8, 2018). The large white blob you can see is an ONIFUBE which can grow to be up to one meter in diameter 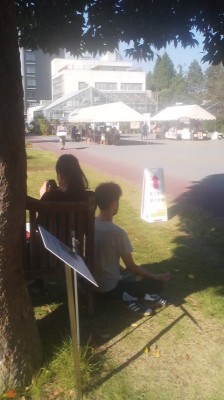 On a beautiful day in Tsukuba – a rare sight – a young man sitting next to his girlfriend doing zazen meditation at the Botanical Garden. An indication in recent resurgence of interest in traditional culture. 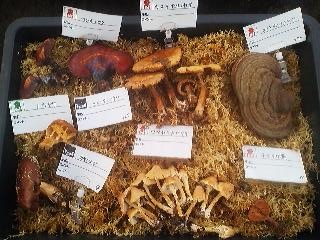 A tray of mushroom at the Tsukuba Botanical Garden 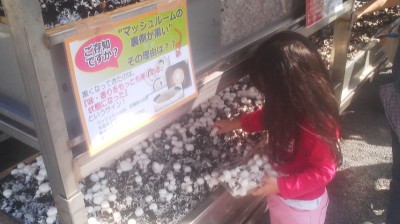 For three hundrwd yen you can pick a packetfull of mushrooms

Being a heavilly forested country with several climatic regions, Japan is very rich in mushrooms- with approximately 4000 identified species and many more yet to be named. Each autumn  the amazing bounty of this country`s fungi can be encountered at supermarkets, at the table, and ESPECIALLY( because most species are not eaten)- IN THE WOODS!

Coming in so many different shapes, colors, and sizes, the discovery of certain unusual mushrooms can often be the highlight of an autumn hike ( or stroll).

Of course, this holds true in the Tsukuba area, as well, where about 400 different mushroom species grow in the wild. 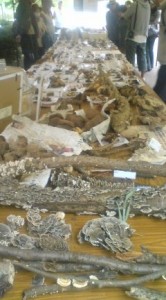 Mushrooms of different sizes, different shapes, and a surprisingly varied array of smells, around the freshly picked mushroom table

If you have a chance to make it to Tsukuba`s excellent botanical garden by Oct 8th, you will be able to encounter more than half of these species (about 200) freshly gathered and laid out on a table as part of the Mushroom Exhibition- KINOKO TEN, which opened last weekend and will run through the evening of  October 8, 2018.

This amazing FESTIVAL OF FUNGI  on display in a newly built glass house is especially  interesting for its labeling system which indicates whether species are edible or poisonous, and if poisonous, to what degree ( the angel mark indicates deadly mushrooms- of which there are several species which grow wild in the Tsukuba area!). You will realize from the sometimes close resemblance between the most poisonous mushrooms and those most commonly eaten-  that you should NEVER trust your own judgement about whether a mushroom that you find yourself in the woods is safe to eat.

All this amazing variety can be touched, handled and smelled to your heart`s content . 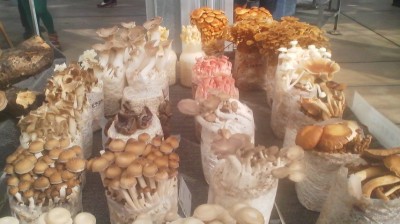 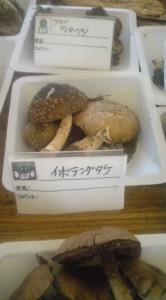 The IBO TENGU TAKE , one of the deadly poisonous mushrooms which grow wild in this area 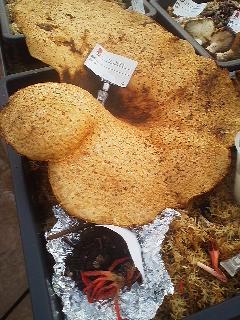 Mushrooms at the Tsukuba Botanical Garden

On weekdays a mushroom specialist ( mycologist) will give a little talk about the Tsukuba mushrooms at noon, while on the weekend this will take place twice ( at 11:00 and 1:00).

After discussing some of the more interesting specimens on the table, the researcher will then take you on a walk through the garden in search of mushroom growing wild on the grounds. 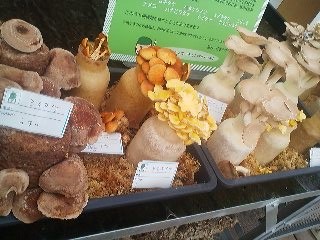 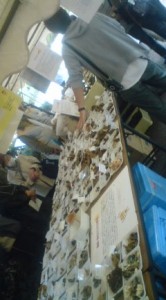 Before you get to the amazing Table of Local Mushrooms you will pass through the main display of the exhibition which explains various aspects of some of nature`s most mysterious organisms ( though the texts are in Japanese only).

Entrance to the Botanical Garden costs 300 Yen, though I would recommend buying a one year pass for 1,000 Yen which allows for unlimited free entry for a period of one year. Since this pass will also get you into the National Science Museum in Ueno for free, I consider it to be one of the best bargains available to nature lovers in Tsukuba ( just ask the front desk clerk for a REEPEETAZ PASS –   リピーターズパス).

And for those interested in some more on interesting mushroom encounters in Tsukuba you can read about my own face to face with the stinkhorn PHALLUS IMPUDICUS here: 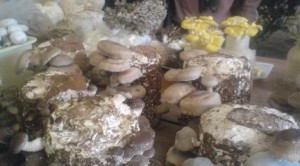 Some of Tsukuba`s edible mushrooms on display 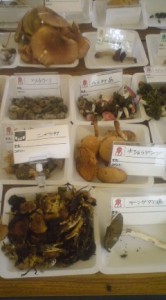 And some of the fungi you should avoid eating! 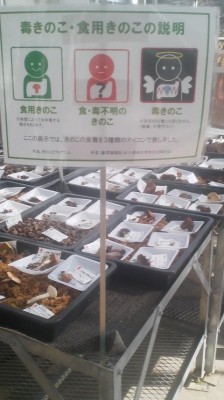 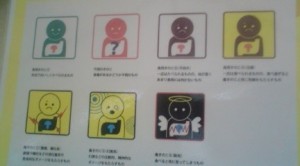 In past years this was the system is used to classify the local  mushrooms displayed on the table outside.

Here is a key to the symbols:

The purple character in the white background- EDIBLE BUT NOT TASTY

The purple in the yellow- EDIBLE IN SMALL QUANTITIES

The Yellow character with the swirls around its head- A HALLUCINAGENIC 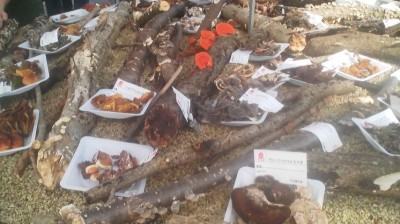 Mushrooms at the Tsukuba Botanical Garden 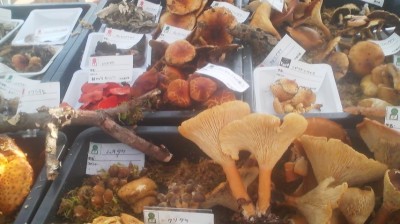