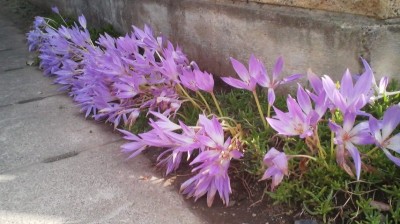 By mid-October, the long, slender, curly, and deeply red petals of Japan`s HIGAN BANA (spider lilies) have fallen away- in fact they have disappeared altogether- without even the slightest trace (blown away?). And since these amazing flowers of autumn bloom on stems without leaves (these grow in later), all that remain of them are limp dull green stalks- in thick clusters. The fact that these flowers grow mostly on temple grounds, in graveyards and around old sacred stones makes encounters with these headless HIGAN BANA an even more forlorn experience.

Fortunately, however, it seems that the residents of Japan`s old neighborhood`s (and its new one`s, as well)  take care that there is always another interesting flower which bursts into bloom just in time to take the place of one that is starting to fade away. 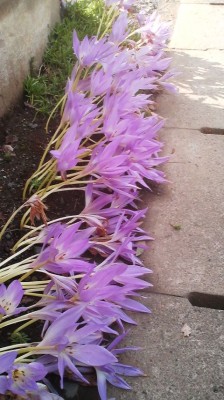 And that is why those who go out for an autumn stroll only to be filled with a sense of disappointment at the disappearance of their spider lilies are bound to have their spirits lifted soon again by an encounter with another flower which grows in clusters out of bulbs, on leafless stems, and in an startling color- the Japanese call it INU SAFURAN (which translated directely means DOG SAFFRON), and its English name autumn crocus- is equally misleading!

I say this because these flowers are neither crocuses nor saffron ( though they DO bloom in autumn- making the English name the more accurate)! 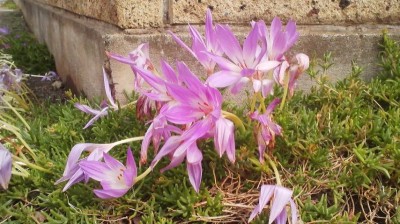 These flowers DO , however, resemble saffron flowers, and many Japanese will incorrectly identify them as being that other, more famous flower.

And though saffron has been long considered a more valuable plant as the source of an important spice, dye, and medicine, recent papers in scientific journals suggest that in the future INU SAFURAN (autumn crocus- scientific name Colchicum autumnale) may prove to be usefull in the treatment of various types of cancer. One substance found in its bulbs has already been used for centuries to treat gout. 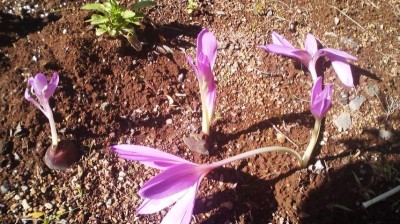 So when you do experience the pleasant surprise of suddenly coming across these brillant flowers on an autumn day, remember that they are not just a poor man`s saffron ( which is what the Japanese name INU SAFURAN- DOG SAFFRON is probably  supposed to indicate)- but a potential wonder drug. Lets hope that these recent scientific reports are not as mosleading as the flower`s names! 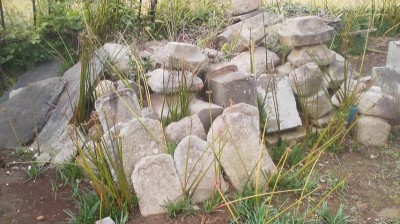