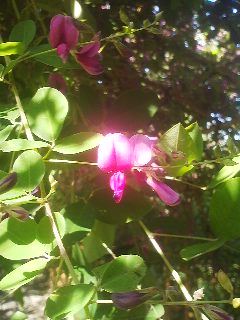 Close-up of HAGI (bush clover) blossoms- one of the Seven Flowers of Autumn, and the most mentioned of all the numerous plants, trees and flowers written about in the Manyoshu- the great collection of Japanese poetry edited in the 8th century

The number 7 has been long been held to be  special or LUCKY in various civilizations around the world. Perhaps this is because there are 7 days in the phases of the moon ( which means seven days in a week), or because there are seven large celestial objects in our solar system visible to the naked eye- The Sun, the moon, Mercury, Venus, Mars, Jupiter, and Saturn ( after which the seven days of the week are named in Japanese). Maybe it’s because of the seven stars (including the important North Star) which are part of the Little Dipper ( Ursa Major).

The fact that it is a prime number – meaning that it cannot be obtained by multiplying two smaller numbers – only added to its aura of mystery.

Whatever the reason actually is, throughout human history, 7 has been used to create iconic groupings: the Seven Days of Creation, Shakespeare`s Seven Stages of Man, the seven notes in Western music`s major scale, the Seven Wonders of the World, the Seven Sages of the Bamboo Grove ( in China), the Seven Deadly Sins, Snow White and the Seven Dwarves………… 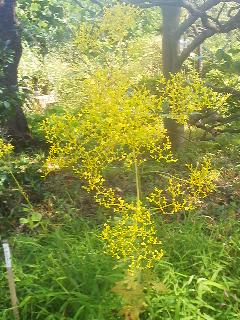 OMINAESHI (Patrinia)- one of the seven flowers of Autumn

In Japan, too, there is no dearth of such SETS OF SEVEN: The Seven Spice Combination (SHICHIMI), the Seven Gods of Good Fortune (SHICHIFUKUJIN) the Seven Samurai, and something I have written a long article about in a past post-  Seven Herb Porridge (NANAGUSA GAYU) made with the Seven Herbs of Spring (HARU NO NANA GUSA).

Eating the sprouts of the first plants to spring out of the earth during the cold of winter is a custom which came to Japan from China, where during the Tang Dynasty those who would be taking the State Examinations (on the seventh day of the new year) did so as a prayer for success and rising up in the world (using the symbolic powers of the hardy cold weather sprouts).

Though it has long since died out in China, in Japan the custom of eating porridge made from the SEVEN HERBS OF SPRING on January 7th remains alive and well – most supermarkets and department stores promote the event and even sell SEVEN HERBS OF SPRING PACKETS so that you don`t have to wander the fields foraging for the plants on your own! 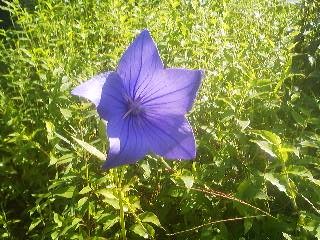 Though the flower name in Okura`s poem is ASAGAO which in today`s Japan refers to the morning glory, most scholars agree that was talking about KIKYO- the bell flower. 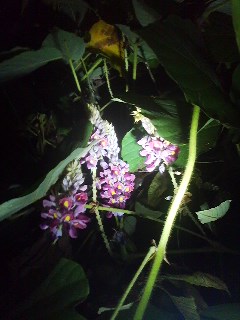 Flowers of the KUDZU plant 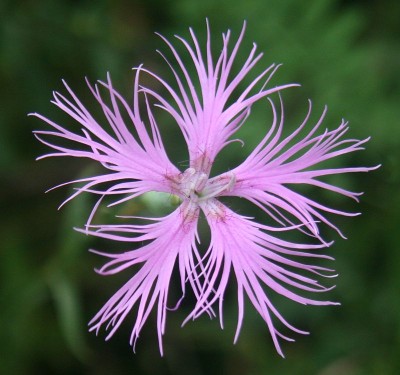 Nadeshiko, now possibly the most famous of all the traditional Seven Flowers of Autumn since it now the name of Japan`s world-class women`s soccer team 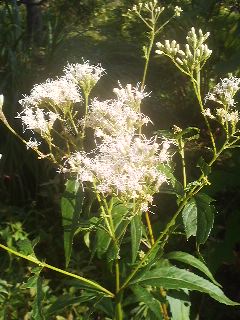 FUJIBAKAMA (Eupatorium fortunei)- one of the seven flowers of autumn.

There is another SET OF SEVEN which just about all Japanese people have at least heard of – even if they cannot remember each of its seven components – a set which was created as a sort of mirror to balance out the existence of the SEVEN HERBS OF SPRING SET : it is the AKI NO NANA GUSA- the SEVEN FLOWERS OF AUTUMN.

Unlike their spring counterparts, the autumn plants are not eaten or involved in any special ritual- they merely evoke the season: its beauty and its special sadness.

And while the origins of the creation of the set of Seven Herbs of Spring is obscured by history, the selection of the Seven Flowers of Autumn can be attributed to a single poet-  and a great one he was- YAMA NO UE NO OKURA ( 山上憶良) – 660 to 733 (?). In the 8th volume of the Manyoshu there is this poem

萩の花 尾花 葛花 なでしこの花 女郎花 また藤袴 朝がほの花
In the autumn fields
I count off on my fingers
the flowers that bloom
and find there are seven:
Those of bush clover, pampas grass, kudzu,
Dianthus and patrinia
Then there are  FUJIBAKAMA and bell flower, as well. 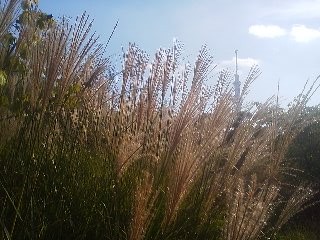 Called OBANA in Okura`s poem, pampas grass is usually referred to as SUSUKI in contemporary Japan. Note the Tokyo Sky-Tree in the background

The poet was most probably observing and taking note of the flowers which grew each autumn in  fields that had been recently burned- since at that time slash and burn agriculture was practice in Japan.
And just think- it is because of this short, innocuous verse that over the past 1,300 years, countless works of art, some of astounding beauty have been created based on the theme of these seven flowers- as a set.
Besides the numerous poems, paintings, motifs on ceramics, lacquerware and fabric, there are gardens which celebrate the actual flowers themselves ( you would be hard-pressed to find all seven plants in one field in the wild, especially since FUJIBAKAMA has become quite rare). 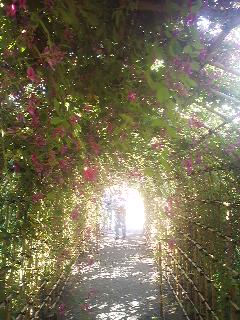 Visitors walk through a HAGI tunnel at the Hyakka-en Garden in Muko Jima, Tokyo

One venue which still maintains the tradition of celebrating the AKI NO NANA GUSA is the old HYAKKA-EN flower garden across the Sumida river from Asakusa, easily reached from Tsukuba by the Tsukuba Express.

Created more than 200 years ago by a wealthy antique dealer named Sahara Kikiuu on a 10,000 square meter plot he had acquired on Muko-jima, the garden, featured flowers mentioned in the MANYOSHU and other great anthologies of Japanese and Chinese poetry. Along with an outpouring of new plays, extravagant festivals, and woodblock prints, it was just one of the many manifestations of the flowering of a unique Edo culture, fueled by the thriving merchant class.

Sahara did not merely want a place to observe flowers, his idea was to create a veritable outdoor salon, where writers and artists would gather, drink tea, compose and recite poetry, paint, draw and make pottery.

Though it was eventually completely destroyed – TWICE – first by a devastating flood in 1910 and then by the Great Tokyo Air-Raid of March 19, 1945, the HYAKKAEN (literally- Garden of 100 Flowers), was recreated after the war and is good place to feel the excitement the Edo townsfolk  felt when the various famous flowers and blossoms bloomed. 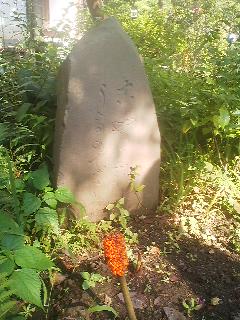 Long connected with the literati of Edo and then Tokyo, the Hyakka En Flower Garden features many poem-stones. Here is one inscribed with a haiku by Basho- about KONNYAKU – with  a Konnyaku plant growing in front of it.

And though you can enjoy you can enjoy this rustic garden at ANY time of year, it is in autumn that there is the most excitement, with MOON-VIEWING events ( the next one on October 1st 2020), poetry, readings and tea ceremonies, while surrounded by the Seven Flowers of Autumn and serenaded by the traditional singing insect- released by breeders into the vegetation. 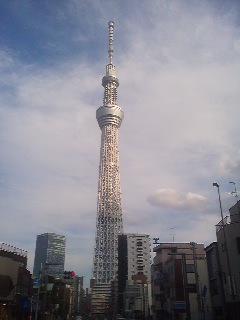 Here is some info on how to get there:

Though if you have the time and the energy you may want to walk there from the TX Asakusa Station. This would ironically take you over the course of the New Year`s Seven Gods of Fortune Pilgrimage.

Cross over the bridge which leads to the famous (infamous) Asahi Beer Building- crowned with the scatologically-shaped head of golden beer foam, and turn to the left, cross another small bridge and head into the Sumida Koen Park ( 隅田公園) which was once the site one of the Mito Clan`s estates.

There is a stone monument there commemorating the first cherry blossom viewing that the Meiji Emperor enjoyed after having left Kyoto to come live in Tokyo.

Stick to your right and you will come to the USHIKAWA JINJA SHRINE with its interesting stone cow.

Head out the gate behind this cow , turn left, and go out onto the main road where the Tokyo Sky-Tree will come into full view. Turn right and go to the intersection. Cross the street towards the convenience store and take the narrow road to the left of it, as opposed to the main road on the right.

You will make it to the Hyakka-En Garden in about 40 minutes- if you don`t stop at all the interesting temples and shrines along the way. 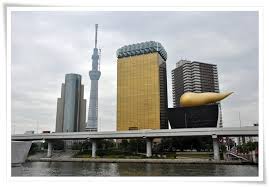 If you walk from Asakusa, you cross the bridge over the Sumida River heading towards the Tokyo Sky-Tree. Instead of heading towards the famous tower, though you will turn to to the left and walk parallel to the river. After passing numerous temples and shrines you will arrive at Hyakka-En in less than an hour. 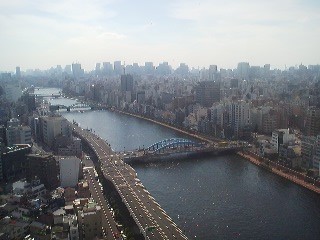 The view from the restaurant ALASKA, located on the 21st floor of the golden building next to the Asahi Headquarters. 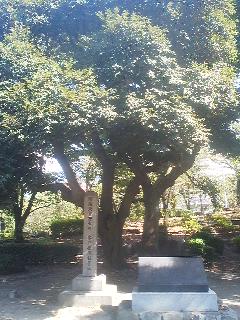 The tree under which the Meiji Emperor enjoyed his first Cherry Blossom Party after having left Kyoto and come to live in Tokyo.